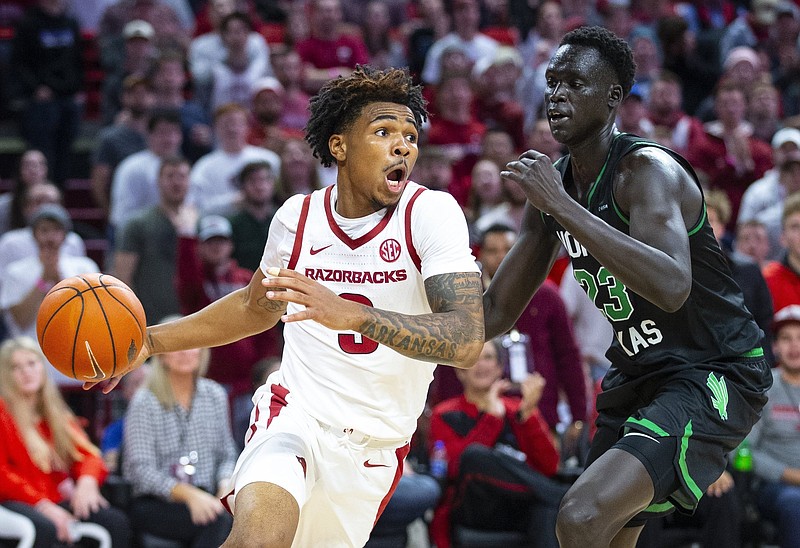 Jonesboro native Desi Sills spent three seasons at Arkansas before entering the transfer portal after this season. He originally elected to transfer to Auburn, but Tuesday he announced he was returning to Jonesboro to play at Arkansas State. (Special to the NWA Democrat-Gazette/David Beach)

But when the pair of local prep basketball stars spoke as Sills left the restaurant, he let Eaton know that there was a chance he'd be staying in Jonesboro for more than just a visit.

In response, Eaton issued a challenge: "Go ahead and do it then."

Sills did -- officially committing to Coach Mike Balado and the Red Wolves on Tuesday.

"We're going to be a dominant duo, I feel like," Sills said of Eaton. "We had magic at Jonesboro ... I hope we connect again and build a bond again."

The two-time Class 6A state champion joins ASU after three seasons at the University of Arkansas, where he averaged 7.7 points per game before entering the transfer portal following the 2020-21 season. It appeared Sills would remain in the SEC when he committed to Auburn in April, but issues surrounding academic eligibility hampered the move.

Now, 10 weeks after announcing his departure from Fayetteville, Sills is a Red Wolf with two years of eligibility remaining.

"I'm extremely excited to welcome back one of our own from Jonesboro," Balado said. "[Desi] is going to continue to thrive in this program and continue to help this program build a culture and the success that we've always been looking for. There's nobody better that we could add to this team than Desi Sills."

Sills cited proximity to home and family -- in particular his mother Shawna -- among the draws that brought him to ASU and said he was sold on Balado, the program and the fast-paced offensive system he'll be stepping into with the Red Wolves.

Following a season at Arkansas in which his minutes dropped from 31.1 to 20.6 per game, Sills views the return home as an opportunity to once again, "be the true Desi Sills."

"I'm trying to be back to what I was in my high school days and early on at Arkansas," Sills said. "... I grew up born and raised here, so I'm just trying to put this city on my back and put us back on the map."

ASU's pursuit of Sills began after he entered the portal on March 31, with the Red Wolves joining a long line of programs interested in securing the 6-1 guard, who will wear No. 3 with ASU as he did with the Razorbacks.

"Stalking him," Balado quipped when describing the program's approach to recruiting him.

ASU struck out the first time when Sills said yes to the Tigers on April 20. He declined to speak Wednesday about the reasons he did not enroll at Auburn. Tigers Coach Bruce Pearl told the Auburn Observer on Tuesday that, "It was in Desi's best interests academically to pursue a different opportunity other than Auburn."

While Balado joked about the committed chase for his new guard, Sills was left impressed by the program's hard approach. In their recruitment, ASU sent out a vision for how Sills would fit into the Red Wolves' guard-heavy, tempo offense and outlined a role for him as a ball-handler, scorer and lead perimeter defender.

"They were real and genuine," Sills said. "They broke down film on how I could fit into an up-tempo game. They showed me what I could do and how we could win in this system together. I felt the love with that."

Sills' arrival marks the most significant change to an ASU roster that has been largely untouched from a team that finished 11-13, with Balado confirming forward Tim Holland -- who played 12.5 minutes per game in 2020-21 and left the program to complete his degree -- as the only departure.

Sills is expected to slot in next to Eaton and veteran guard Christian Willis, adding another scoring threat as a 43.0% career shooter from the field. Just as important could be Sills' defensive contributions as an anchor for the Red Wolves.

"He's a dog," Eaton said of Sills. "He brings some intensity. I think he can be our primary defender -- the guy you put on anybody when you need a stop."

The addition of Sills adds a proven SEC talent to a rotation already featuring Eaton, Willis and reigning Sun Belt Conference Freshman of the Year Norchad Omier. While Balado shied away from laying out predictions or expectations for next season based on his new arrival, he pointed to Sills' commitment as a sign of growth.

"You can see where the talent level has gone from Year 1 to Year 5," Balado said. "So do I think this is our best team? I don't know. I'll let you know in about a month. On paper is it? Probably. But paper means nothing, right?" 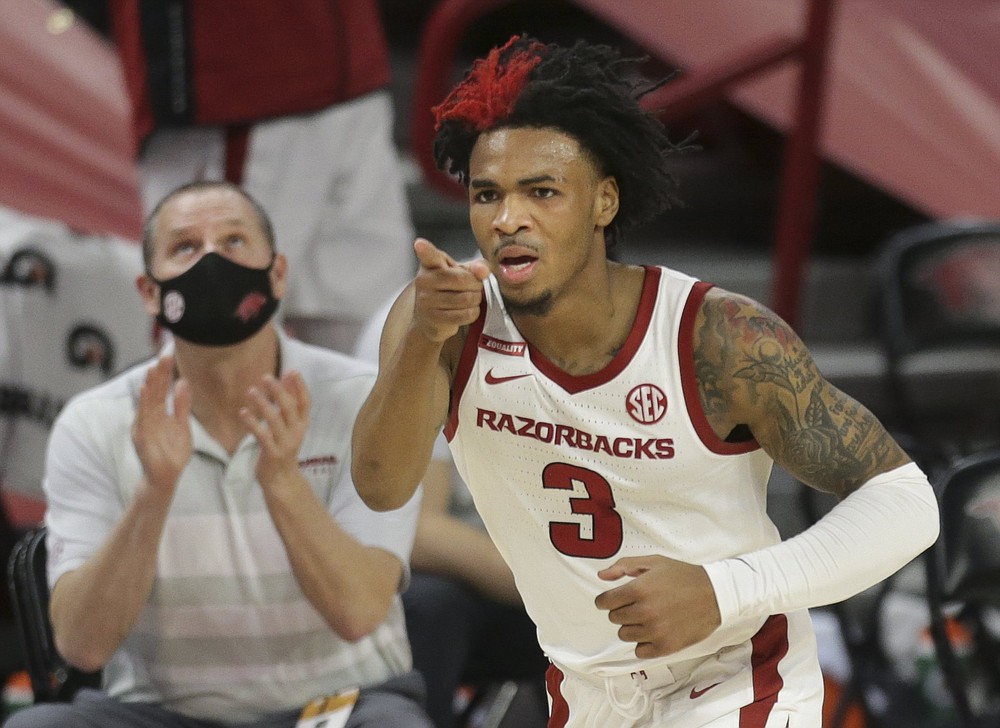 Desi Sills will have two years of eligibility remaining at Arkansas State, where he will rejoin Marquis Eaton, who was formerly his teammate at Jonesboro High School. (NWA Democrat-Gazette/Charlie Kaijo)
ADVERTISEMENT