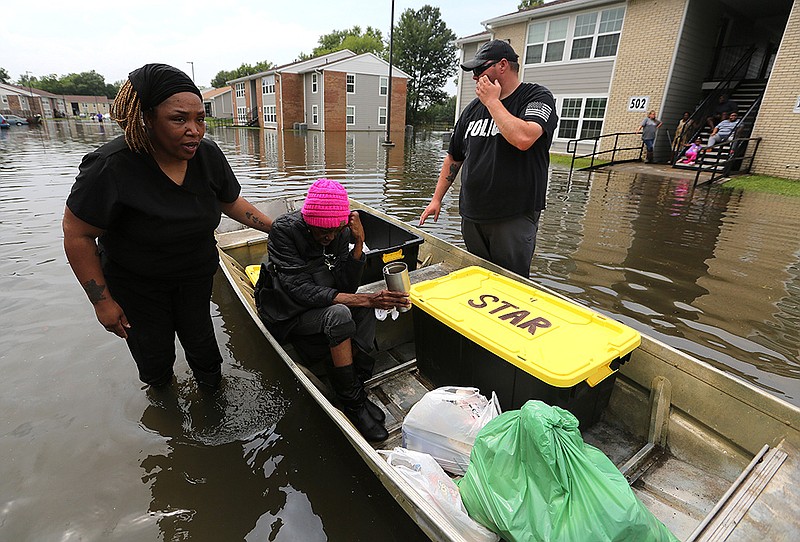 A slow-moving storm system dumped more than a foot of rain in parts of southeast Arkansas over the past few days, flooding homes, businesses and crops in Desha County.

Meteorologist Sean Clarke of the National Weather Service in North Little Rock said parts of Desha County have been inundated over two days, which has led to widespread flash flooding.

"The area has seen two months' worth of rain in a span of one month," Clarke said. "The rain is falling in the same area with very little southern movement."

Rohwer, an unincorporated community in Desha County, received 19.22 inches in a 48-hour span.

"That is the second-highest total for a 48-hour period in state history," Clarke said. "The spot that tops it was Danville in 1982, when it received 21.54 inches of rain in a 48-hour period."

Gallery: Flooding in Dumas and Stuttgart

Desha County's County Judge Richard Tindall said Wednesday that he had no idea a disaster was waiting for him when he woke up Tuesday morning.

"No flatland county or area could have been prepared for this," Tindall said. "To get 17 inches of rain in a short period of time is as bad as the river levee breaking."

Clarke said the rain is from different storm systems, but it's a similar weather pattern.

"They develop in Oklahoma and Texas as thunderstorms, and when they come into the state, and the severe weather drops, it produces a lot of rain during the overnight hours as it pushes south," he said. "We have been stuck in this repeating pattern, which is typical for late spring in Arkansas, but this year there have been efficient rainmakers in Desha [County] and southern Arkansas."

Rain chances are expected to continue into today as the system begins to move out of the region, according to the weather service. East-central Arkansas and far southeast parts of the state could see another inch of rain today, mostly early in the day.

Tindall said he has never seen flooding like this in Desha County.

"I think it's a combination of things," he said. "We had so much rain over the spring and early summer that we were pretty much already soaked. Add in the 17 inches of rain coming in on top of it, and there was no soaking, just all standing water and it just got deeper."

Tindall said Wednesday that the northern half of the county had seen 15-17 inches of rain in an 18-hour period.

"Dumas was totally flooded," he said. "We haven't gotten an accurate count of the number of residences and businesses that have been flooded, but we are estimating around 300 in that town alone."

Dumas Mayor Flora Simon said city officials have planned a meeting today to get an accurate assessment of the damage to residences.

Simon said she had seen Dumas flood previously, but this was unique because of the speed and range of the water.

"I haven't seen quick flash flooding like that in Dumas," she said.

Several other communities in the county such as Rohwer, Mitchellville, Watson and Reed are also dealing with considerable flooding.

"The water has started to recede, but our ditches and drains are filled, and water is almost at the bottom of the bridge," Tindall said Wednesday afternoon. "We can't stand any more rain now."

Parts of U.S. 65 were blocked this week because of water overtaking the roads.

"Several places along the highway were completely flooded," Tindall said. "It just got deeper from there. The further away from the highway you are the deeper the water gets."

Tindall said county officials filled sandbags Tuesday at the National Guard Armory in McGehee for people to pick up.

"We didn't have the personnel to bring sandbags out to all the parts of the county," he said. "We didn't have a clue this was going to happen until we got up on Tuesday morning, and it was just totally flooded. Didn't dream we would get this much rain."

Tindall said many people have been displaced from their homes.

"Today I saw a son picking up his mother and father from their home and carrying them over to where he lives, and I saw several people doing the same," he said Wednesday. "People are hunkering down and trying to find a place to live right now, but I don't know what will happen in the long run."

Desha County is a largely agricultural community, and Tindall said there will be repercussions beyond damaged homes and businesses.

"We have acres of cropland completely underwater," the county judge said. "If it doesn't get off today then the land won't make it this year, and there are thousands of acres that won't drain today."

Tindall has already filed a request with the state asking for disaster relief. He said Gov. Asa Hutchinson called Wednesday morning to get a rundown of the situation.

"The [Arkansas Department of Emergency Management] is expected to be here and take a look around soon," Tindall said. "They couldn't get here quicker because there was too much water on the roads."

"It has been rough across southeast Arkansas," he said.

"Stuttgart was the hardest hit," he said. "It just rained so much that it couldn't get away. We had water in 30 or more houses, and we have volunteers trying to prevent water from getting into the museum. It was too much rain."

Best said he talked to some residents who have lived in Stuttgart their entire lives and were shocked by the flooding.

"They had never seen anything like this," he said.

Arkansas County also is a largely agricultural area, and its crops have taken the brunt of the water.

"The problem is beans and corn can't stand in standing water for long periods of time," Best said. "These plants got to breath. If these plants stay in the water for too long they will be dwarfed, or they will die."

A more typical summer pattern is expected to develop over the region heading into the weekend, according to the weather service. Hot and humid conditions will return with the chance of afternoon and early evening showers and thunderstorms.

Highs are expected to top out in the upper 80s to lower 90s, and with saturated soil and significant standing water muggy conditions are expected. 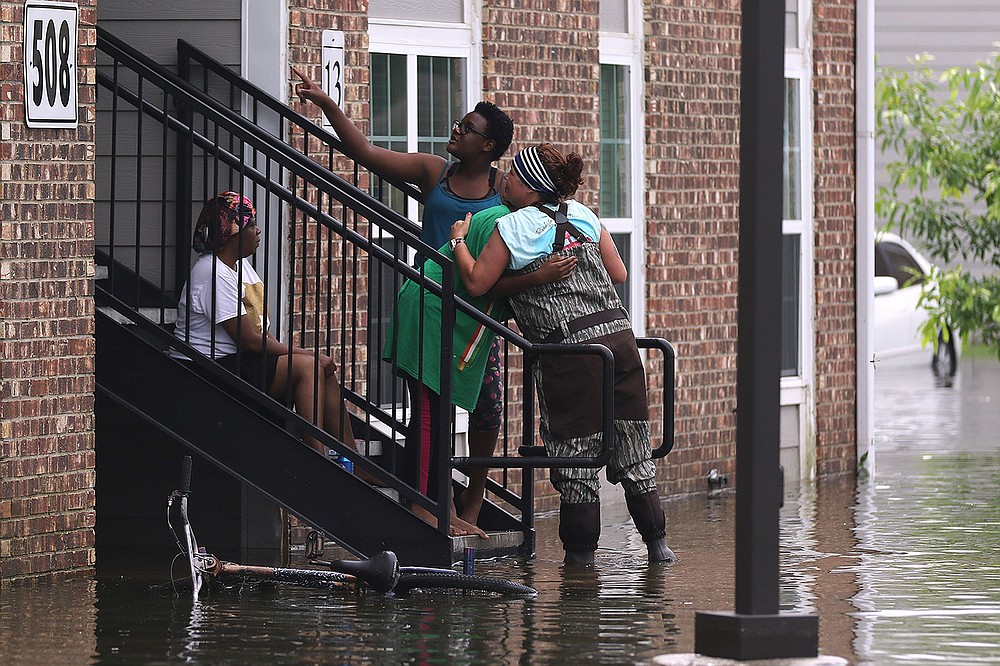 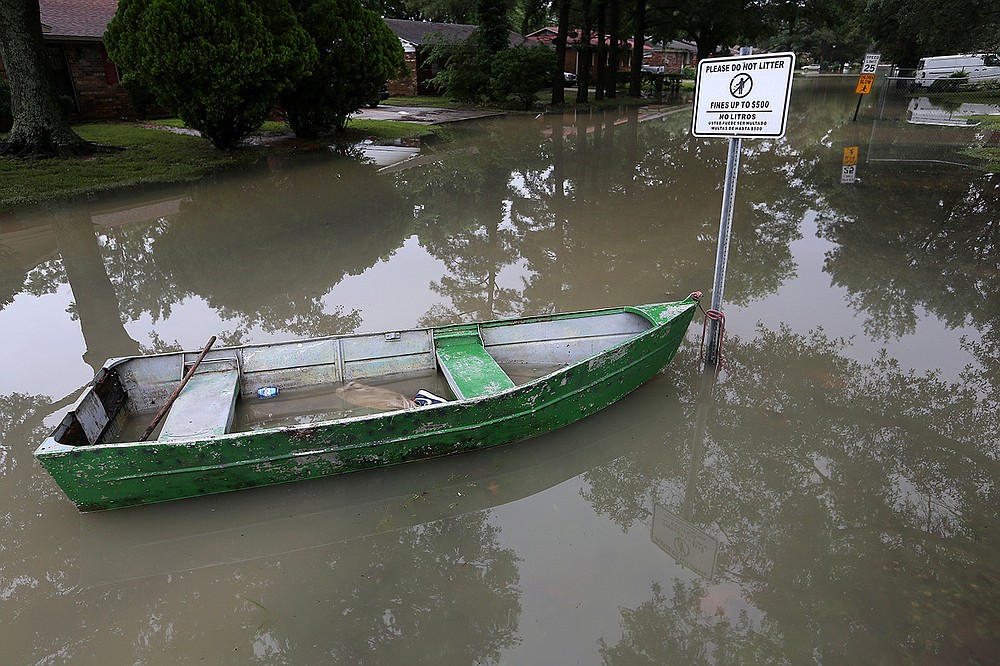 A boat sits tied to a sign Wednesday on a street in Dumas. About 300 businesses in the city have flooded, according to the county judge for Desha County. (Arkansas Democrat-Gazette/Thomas Metthe)
ADVERTISEMENT