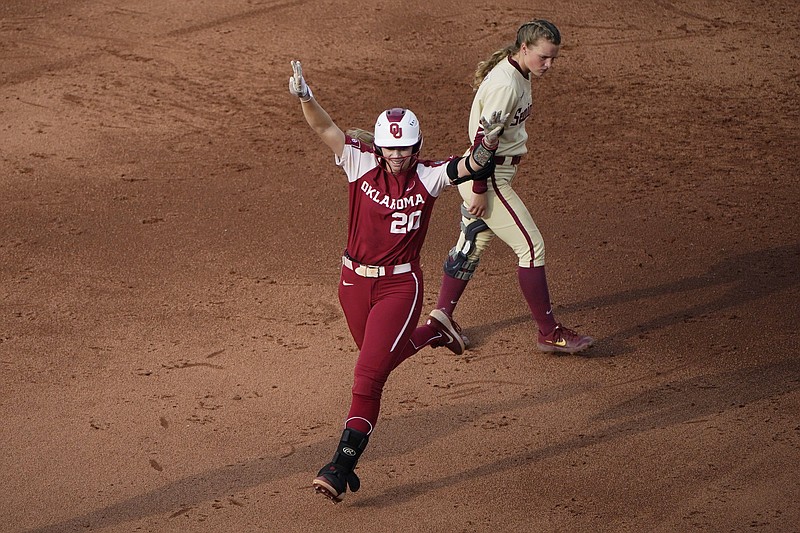 Oklahoma’s Jana Johns celebrates as she circles the bases after hitting a home run during the Sooners’ victory over Florida State in Game 2 of the Women’s College World Series championship series Wednesday night. (AP/Sue Ogrocki)

OKLAHOMA CITY -- Jocelyn Alo knew her hit was gone as soon as she made contact.

Oklahoma's slugger blasted a go-ahead home run in the sixth inning, and the Sooners beat Florida State 6-2 on Wednesday night to force a decisive Game 3 for the Women's College World Series title.

It was Alo's 33rd home run of the season. The USA Softball Collegiate Player of the Year added to her school record. But this one was different.

"I did know it was out," Alo said. "And I think the last time I circled the bases that quickly was probably my freshman year, my first-ever home run."

The final game will be played today. Oklahoma (55-4) is seeking its fifth national championship. Florida State (49-12-1) is trying for its second title in four years.

Alo sent Kathryn Sandercock's 2-0 pitch over the right-center field fence, giving the Sooners a 3-2 lead. Her blast fired up the crowd of 12,115 mostly Sooners fans at USA Softball Hall of Fame Stadium, which is about 25 miles from Oklahoma's campus.

The home run gave the Sooners the Division I single-season record for home runs with 159, breaking the mark Hawaii set in 2010.

Giselle Juarez pitched a complete game for Oklahoma. She gave up two runs in the first inning, then threw six shutout innings and allowed just two hits the rest of the way.

"My hitters came up to me and they were, like, 'We've got you, we have your back,' " Juarez said. "And I think for me, it was all about keeping them in that game. They had my back. They're always going to have my back."

Juarez improved to 4-0 in the tournament and has surrendered just three earned runs in 24 1/3 innings. Oklahoma Coach Patty Gasso didn't say if Juarez would start Game 3.

"Everything is on the table right now," Gasso said. "You've got to do everything you can to find a way to win this. So whatever we have to do -- and I know she'll do whatever she has to do as well."

Sandercock, who had been dominant during the World Series, started and gave up 4 earned runs and 7 hits in 5 innings for the Seminoles, who won the opener of the best-of-three final 8-4 on Tuesday.

Oklahoma's Jana Johns homered to left field in the third, a shot that hit the 300-foot slow-pitch fence on one bounce.

Oklahoma's Tiare Jennings reached base on a throwing error in the sixth before Alo's home run, which highlighted a four-run outburst in the inning.

"It was definitely Jocelyn Alo that kind of created this energy, and everybody just started to step up behind her," Gasso said.

Mason said the Seminoles are ready to move on.

"Any game, win or loss, is just a rearview mirror game," she said. "You put it behind you. It doesn't affect the next game. We knew that they were going to come out swinging today." 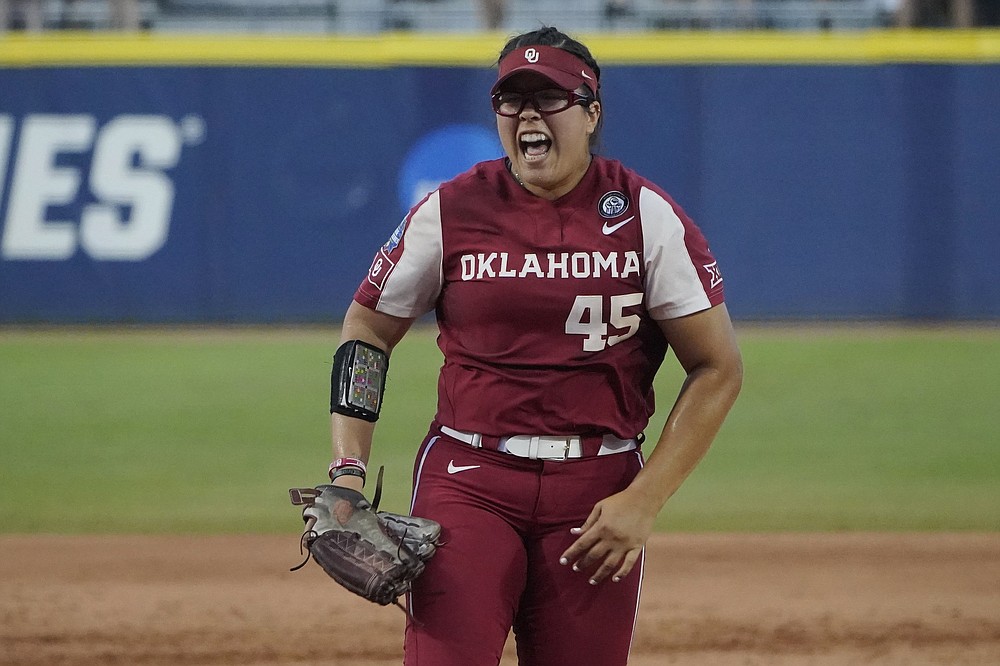 Oklahoma pitcher Giselle Juarez celebrates after the final out of the Sooners’ victory over Florida State in Game 2 of the Women’s College World Series championship series. The third and deciding game is today. (AP/Sue Ogrocki) 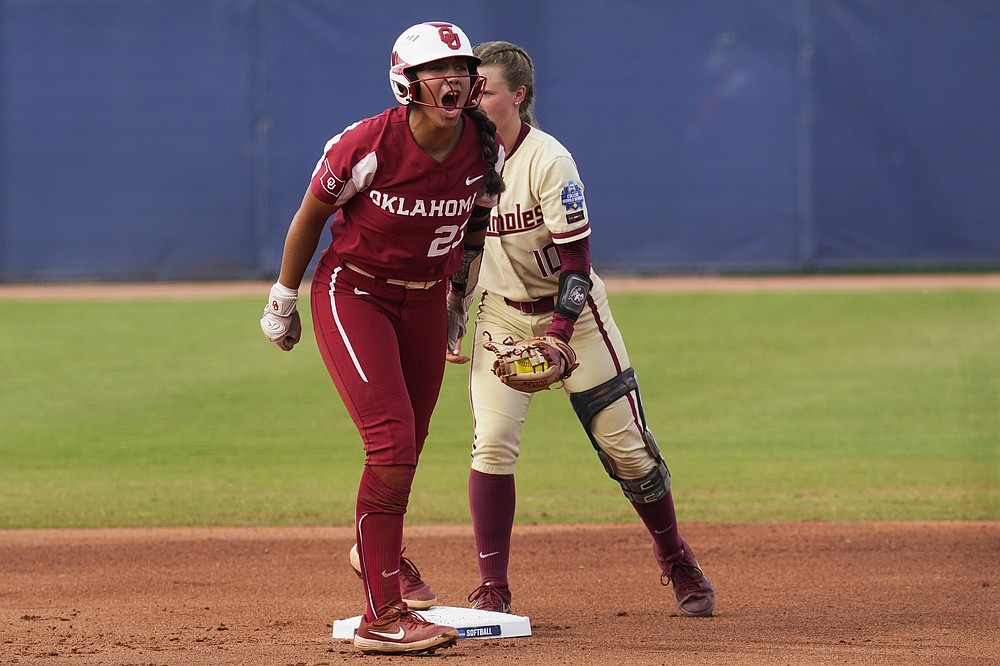 Oklahoma's Tiare Jennings, left, celebrates at second base next to Florida State' Josie Muffley after a double in the first inning of the second game of the NCAA Women's College World Series softball championship series Wednesday, June 9, 2021, in Oklahoma City. (AP Photo/Sue Ogrocki) 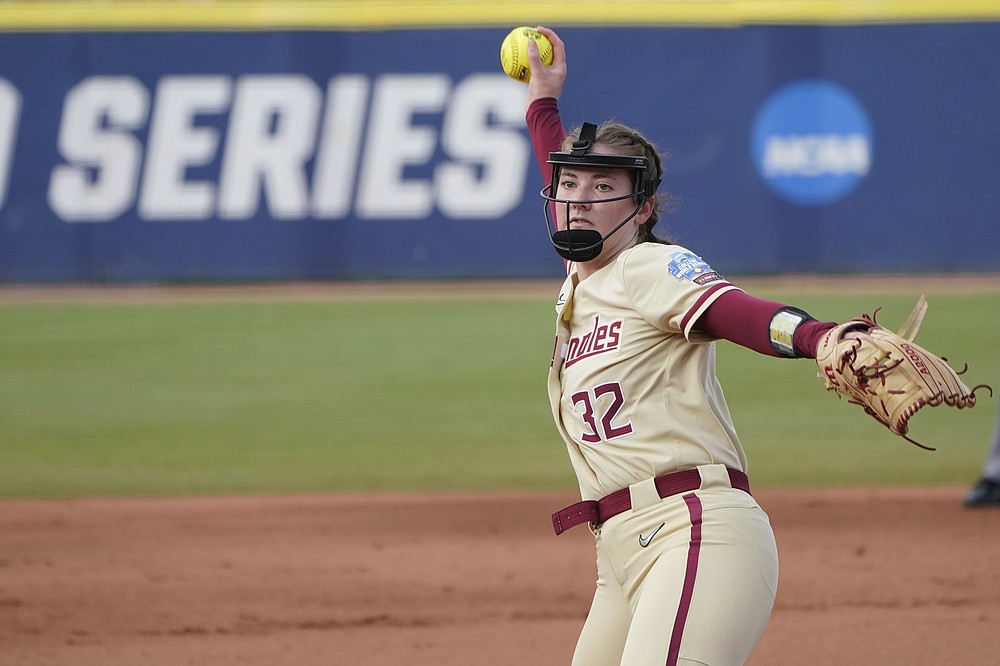 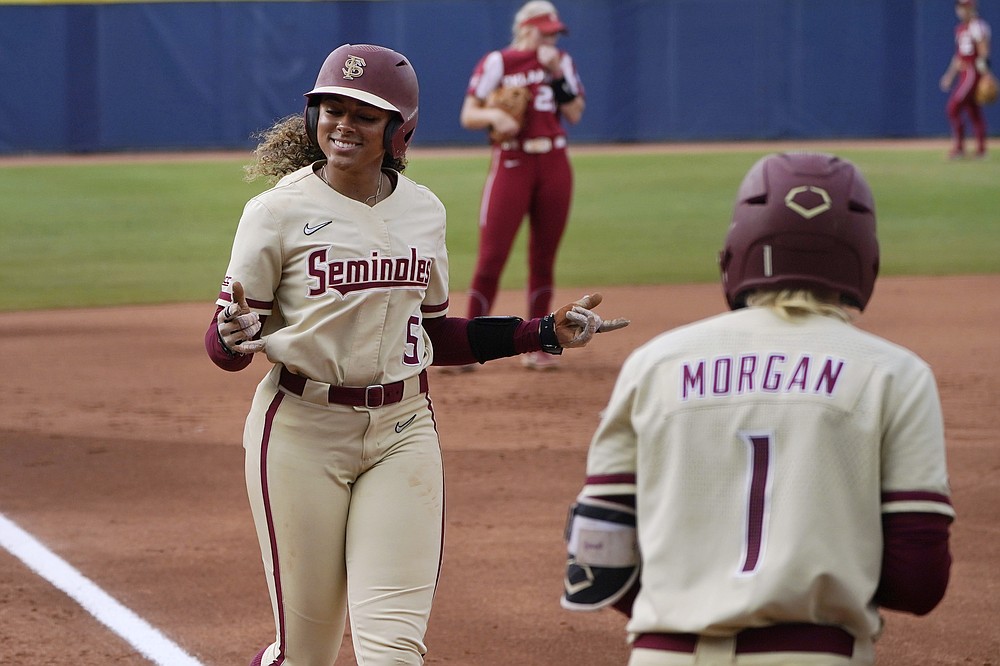