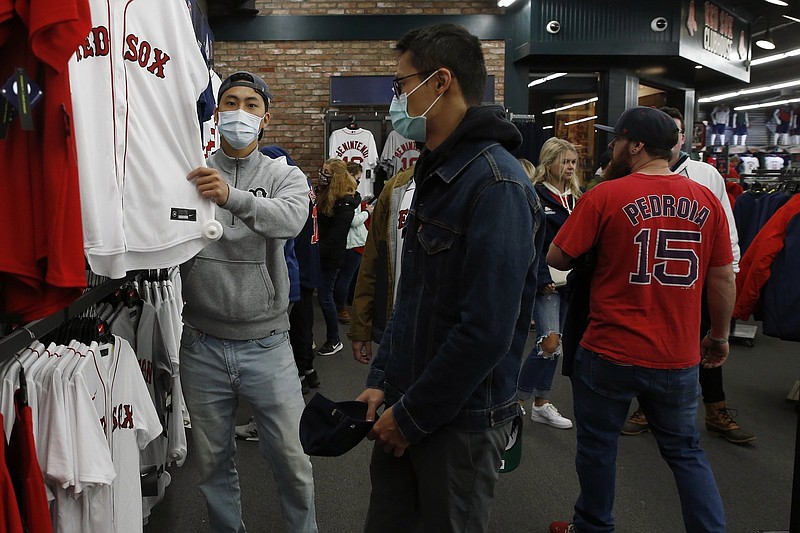 Fans shop at the Boston Red Sox team store before a baseball game in Boston in May as covid-19 restrictions were being lifted in Massachusetts. The National Retail Federation has revised its sales projections higher for 2021. (AP)

A national retail trade group has revised its sales projections upward for the year as the economic recovery from the pandemic accelerates.

The National Retail Federation now expects retail sales to grow between 10.5% and 13.5%, compared with its growth projection in February of 6.5% to 8.2%. The revised figures represent about $4.5 trillion in total sales.

Federation President Matthew Shay and Chief Economist Jack Kleinhenz presented the new sales forecast on Wednesday in the group's live webcast of its State of Retail and the Consumer event.

They said that when the original forecast was made earlier this year, there was still much uncertainty surrounding consumer spending, covid-19 infection rates, vaccine distribution and any additional stimulus funding.

"The economy and consumer spending have proven to be much more resilient than initially forecast," Shay said. "The combination of vaccine distribution, fiscal stimulus and private-sector ingenuity have put millions of Americans back to work."

The National Retail Federation, based in Washington, D.C., says retail is the nation's largest private-sector employer, supporting 1 in 4 U.S. jobs and contributing $3.9 trillion to the overall economy annually.

Noting that risks still remain, such as worker shortages, an "overheating" economy, tax increases and over-regulation, Shay said that "overall, households are healthier and consumers are demonstrating their ability and willingness to spend."

"The pandemic was a reminder [of] how essential small, mid-size and large retailers are to the everyday lives of Americans in communities nationwide," he said.

The National Retail Federation now estimates 2021 retail sales, including those made online, will total between $4.44 trillion and $4.56 trillion. Online sales alone are expected to grow between 18% and 23%, to about $1 trillion. All figures exclude car dealers, gas stations and restaurants.

Retail sales in 2020 totaled $4.02 trillion, with e-commerce contributing $920 billion to that figure.

Kleinhenz said monetary policy interventions, such as stimulus funds and other measures, "lifted personal income and filled the well of income that was lost back in March and April of last year, creating an overabundance of purchasing power."

Carol Spieckerman, a retail consultant and president of Spieckerman Retail, said the trade group's projections are realistic "and perhaps even conservative."

"Retail exhibited tremendous resilience during the pandemic, so the upside should be considerable," Spieckerman said.

While forecasts take many factors into consideration, she said, "the combined momentum and psychological aspects can't be overestimated."

"Consumers are more confident and buoyant as restrictions lift and covid-19 casualties plummet," Spieckerman said. "There is pent-up demand, not just for acquiring and purchasing but also for interacting with others."

Still, she said, customers have grown accustomed to the convenience of online shopping.

"A resurgence in brick-and-mortar, combined with shifts toward digital shopping across innumerable categories, should boost sales in the back half of 2021," Spieckerman said. "Retailers have a lot to look forward to."

Given the strength of consumer spending, Kleinhenz said he anticipates the fastest economic growth the U.S. has seen since 1984.

"The reopening of the economy has accelerated much faster than most had believed possible, even a year ago," he said.

Wednesday's event included two panel discussions. In the first, called "Divided We Stand: Decoding the Citizen Shopper," panelists said that consumers, especially millennials, have become "citizen shoppers." They want companies to take a stand on social and political issues -- only there isn't just one stand.

Panelist Melissa Repko, a retail reporter with CNBC, said retailers in response are showing that they care about those issues as well. "It's been very visible in the past year," she said.

Another panelist, Karen Benway with Ernst & Young, said a survey the company did earlier this year showed that concern about climate change is universal among consumers.

"Otherwise, there's a lot of complexity around other issues," Benway said, with consumers more divided on them. "It's a lot trickier water for brands to navigate right now."

Rachel Bonsignore with the market research firm GfK said data analytics help companies make sure customers have what they want.

But, she said, "brands can't be everything to everyone," and any solution "is not going to be one-size-fits-all."

In the second panel discussion, executives with Albertsons Cos., IKEA U.S. and Sephora Americas shared their views on what consumer behavior will look like post-pandemic.

"But a big surprise this year as stores reopen is that online sales have remained as strong," Rougeot said. And in-store sales are topping those of 2019.