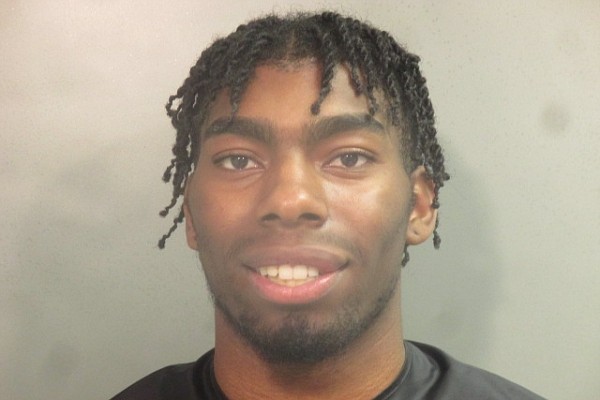 FAYETTEVILLE — Kamani Kevinano Johnson, a player on the University of Arkansas basketball team, was arrested Wednesday night in connection with disorderly conduct and resisting arrest.

Johnson, 21, attempted to strike a Fayetteville Police officer as the officer attempted to break up a fight that was blocking the roadway at Dickson Street and N. School Ave., according to a preliminary arrest report. The incident occurred at 11:02 p.m.

The report states Johnson was detained and initially calmed down, but he continued yelling when officers attempted to escort him away to avoid arrest. According to the report, Johnson continued to block the roadway and antagonize others in the crowd.

Johnson refused to comply with commands and continually attempted to fight people, according to the report. Once told he was under arrest, Johnson, who is 6-9 and 220 pounds, refused to place his hands behind his back, then grasped a nearby light pole to prevent arrest, the report states.

Johnson’s resistance resulted in injury to officers, according to the report.

“We have been made aware of the incident involving Kamani Johnson,” UA basketball coach Eric Musselman said in a statement. “We are in the process of gathering more information from the proper authorities. His status with the team will be determined once we have made a thorough review of the information.”

Johnson was booked in the Washington County jail at 11:26 p.m. and was released Thursday at 5:12 a.m. on a $265 bond. He has a hearing in Fayetteville District Court scheduled for Friday.

Johnson began his college basketball career at the University of Arkansas-Little Rock, where he played two seasons before transferring to the Razorbacks. He joined the UA team last December but has not played in a game.