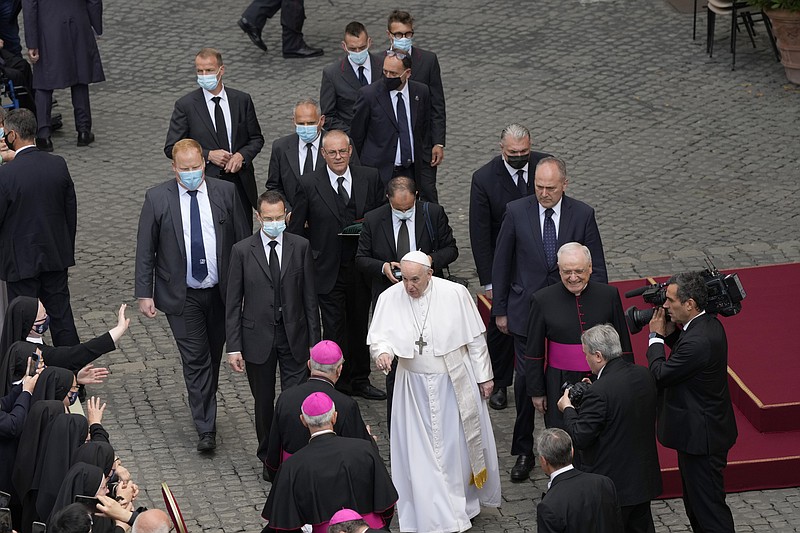 Pope Francis greets prelates as he is followed by security guards during his weekly general audience, at the Vatican, Wednesday, June 9, 2021. European evaluators warned Wednesday that the Vatican's efforts to investigate and prosecute financial crimes were suffering from understaffing and inexperience, as well as the mistaken belief that its own cardinals and bishops were immune to criminal conduct. (AP Photo/Alessandra Tarantino)

ROME -- European evaluators warned Wednesday that the Vatican's efforts to investigate and prosecute financial crimes were suffering from understaffing and inexperience, as well as the mistaken belief that its own cardinals and bishops were immune to criminal conduct.

The Council of Europe's Moneyval commission issued a lengthy report on the Holy See's compliance with international norms to fight money laundering and terrorist financing. Overall, the evaluators gave the Holy See good grades, finding that it was complying with most standards, had taken steps to improve its laws and had achieved effective levels of international cooperation.

But the evaluators complained that Vatican prosecutors had only managed to bring a handful of money laundering cases to trial in the past decade. The evaluators said the lengthy amount of time needed to reach both an indictment and conviction showed only a "modest" functioning of the judicial system, and they warned that the sentences handed down to date were so "minimal" that they provided no deterrent value.

And most critically, the report strongly faulted the Holy See for having ignored the possibility that its own employees might be abusing their offices and the Vatican's financial system for their personal gain. They said their evaluation process couldn't be completed until the Vatican undertakes a "comprehensive assessment" of the risks posed by insiders and enhances its own supervision of staff to detect possible crimes.

The Holy See said it welcomes the report, "renews its commitment to continue working towards full compliance" and will carefully consider Moneyval's recommendations.

The head of the Vatican's financial intelligence authority, Carmelo Barbagallo, noted that few countries receive such positive marks and said he considered the absence of any "low effectiveness" marks a success.

The report was issued amid a two-year criminal investigation into the Vatican secretariat of state's $425 million investment in a London real estate deal. It has implicated a half-dozen Vatican employees and a handful of outside Italian brokers who are accused of fleecing the Holy See of tens of millions of dollars in fees.

No indictments have been handed up, though the report said a trial was expected to begin this summer. The investigation has revealed that high-ranking officials in the secretariat of state -- as well as Pope Francis -- were aware of the deal and approved it, but to date they aren't known to be under investigation.

The Moneyval evaluation ended before Francis took measures to address one of the major loopholes flagged by the report: that cardinals and bishops have enjoyed near-immunity from prosecution by the Vatican tribunal.

Francis on April 30 removed the procedural obstacles and made it clear that prosecutors needed only his consent to proceed with investigations against cardinals and bishops.

The Vatican submitted to the Moneyval evaluation process after it signed on to the 2009 EU Monetary Convention and in a bid to shed its image as a financially shady tax haven whose bank has long been embroiled in scandal.

After its first 2012 on-site evaluation, the Vatican received passing grades, but subsequent progress reports have repeatedly faulted Vatican prosecutors for failing to actually bring charges in many cases of suspicious transactions.

Wednesday's Moneyval report repeated that complaint, saying both the prosecutor's office and the office of the Vatican's financial intelligence unit were too short-staffed to handle the workload. It also said the personnel the Vatican did have were inexperienced in investigating and prosecuting complicated financial transactions and crimes.

While some delays were due to slow responses from other countries, Moneyval faulted prosecutors for sitting on cases and waiting for convictions of suspects elsewhere and said they must set targets to bring cases to trial.

The evaluators also faulted the Vatican's reliance on part-time prosecutors who also practice law in Italy, warning that they might have conflicts of interest and recommending that they be dedicated full time to Vatican cases.

The evaluators also took strong issue with the Oct. 1, 2019, raid of the Vatican's financial intelligence unit, which was authorized by the pope and marked the first public disclosure about the investigation into the London real estate deal. Vatican gendarmes seized computers and files, including confidential documentation provided by other countries to the Holy See to help in the global fight against financial crimes.

As a result of the unprecedented raid, the Egmont Group of national financial intelligence units suspended the Vatican from its confidential information-sharing network for two months, until Vatican prosecutors agreed to never conduct such an unannounced seizure again.

The Moneyval report criticized the conduct of Vatican authorities in staging the raid, saying there was no evidence they had carried out any risk assessment about the international consequences.

The raid resulted in the departure of the office's top managers and the hiring of replacements whom Moneyval said had "very limited" experience in law enforcement or financial intelligence. The report lamented the "institutional memory loss" that entailed and urged measures to reduce the high turnover in the office. 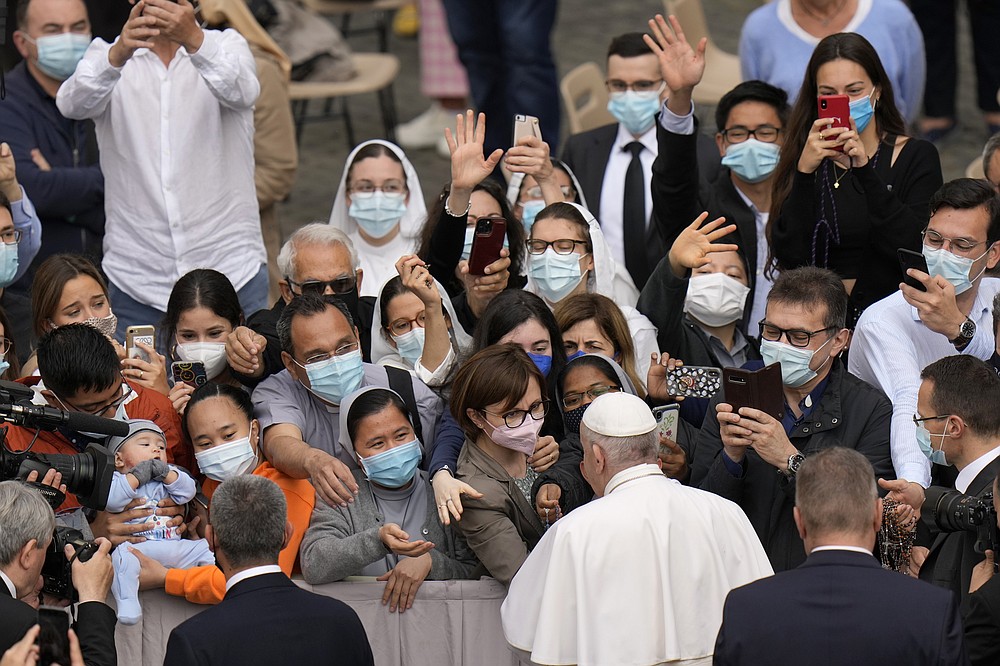 Pope Francis is greeted by faithful as he arrives for his weekly general audience, at the Vatican, Wednesday, June 9, 2021. (AP Photo/Alessandra Tarantino) 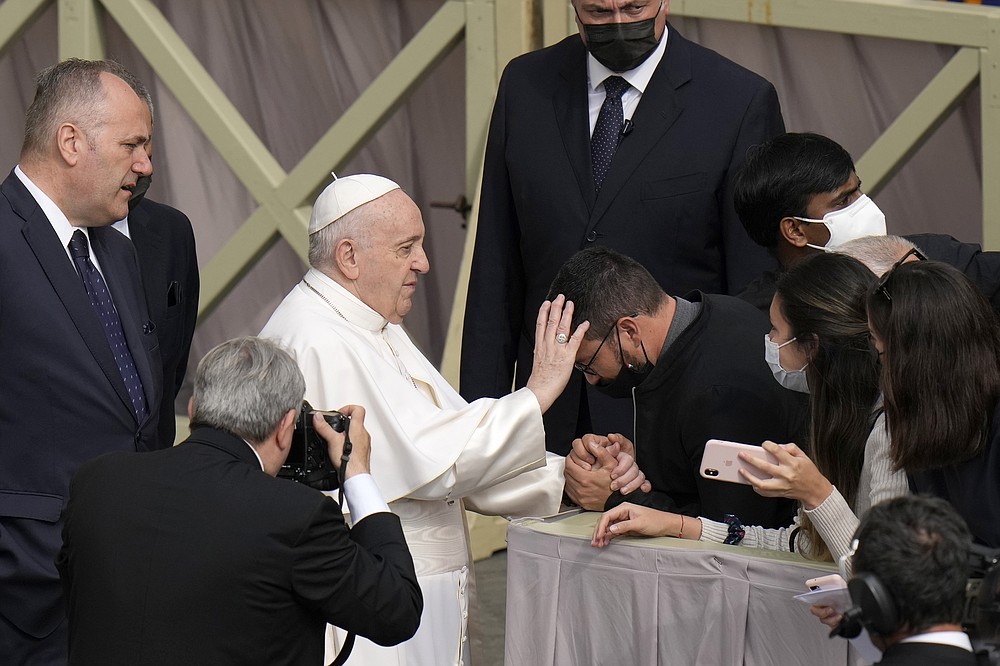 Pope Francis blesses and attendee as he arrives for his weekly general audience, at the Vatican, Wednesday, June 9, 2021. (AP Photo/Alessandra Tarantino)
ADVERTISEMENT