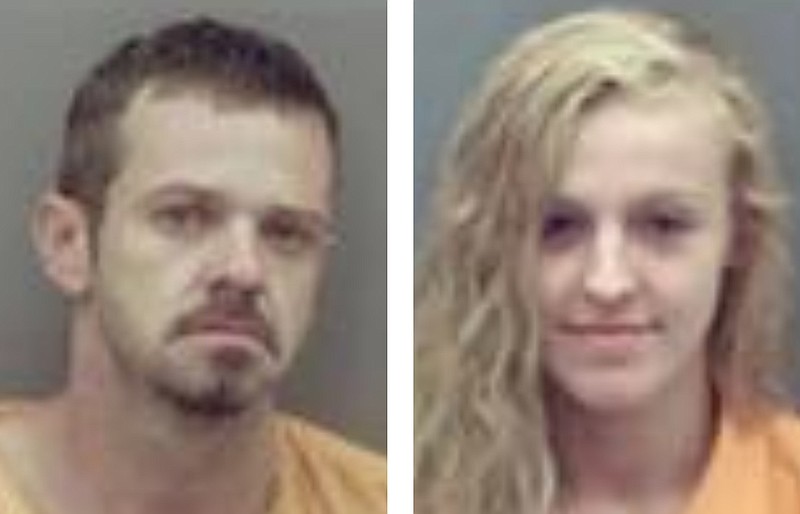 A Jefferson County man remains in the county jail in lieu of $750,000 bond, and woman identified as his girlfriend is still behind bars in lieu of $50,000 bond for charges related to a June 5 shooting of a Mabelvale man.

Bradley Scott Hartley, 34, is charged with first-degree murder of Zakary Chumney, 35, and possession of firearms by certain persons. In 2014, he pleaded guilty to five felony offenses related to a 2013 burglary and served 24 months in prison.

Opal Evelyn King, 20, is accused of aggravated assault and hindering apprehension or prosecution. Investigators say King was upset and rammed Chumney's vehicle several times during a related confrontation and then lied about Hartley's identity because she did not want him to get into trouble.

The bail bonds, which are secured, were set during probable cause hearings in Jefferson County District Court earlier this week. A lawyer has not been listed for either suspect in court records.

According to an affidavit from Jefferson County sheriff's investigator Terry W. Wingard, deputies were responding to a disturbance at Lee Springs and Sullivan roads about 8 a.m. June 5 when they were advised of a shooting at 10256 Sulphur Springs Road. A deputy reportedly found an unresponsive male, identified as Chumney, lying on the ground and performed CPR on him until medical personnel arrived.

Chumney died at Jefferson Regional Medical Center at 8:15 a.m. from a gunshot wound in the chest.

The deputy, Wingard wrote, was told the shooter fled on foot to a wooded area. Upon asking King and another woman, Chi Ann Holland, the deputy was given the name of the suspect, Hartley, whom Holland reportedly identified as King's boyfriend. She reportedly gave the deputy a clothing description, a direction of where Hartley allegedly fled and said Hartley was armed with a silver revolver.

King allegedly told authorities her boyfriend's name was Devon Nash, according to the affidavit.

Wingard wrote that investigators learned that the disturbance, which the sheriff's office said involved white and green SUVs, was connected to the shooting. The white SUV, a 2004 Chevrolet Tahoe, and green SUV, a GMC Yukon, reportedly sustained bumper damage and were seized.

Chumney reportedly drove the Yukon, in which an investigator found an unloaded black and silver Taurus 9mm pistol in the glove box.

About 11:40 a.m., Wingard wrote, Hartley spoke to sheriff's officials by phone and agreed to turn himself in. Unarmed, Hartley was taken back to the Sulphur Springs residence and read his Miranda rights. He was then asked to locate a gun and directed investigators to a wooded area, where a silver RG revolver was found.

Holland reportedly told King she had purchased the Tahoe from Chumney and persuaded King to take her to where she allegedly hid the vehicle, which investigators say is Sullivan Road. An argument involving Chumney, King and Hartley was said to have ensued when the three returned to the Sulphur Springs residence, and Holland reportedly told investigators that Hartley shot Chumney once the victim approached Hartley, according to the affidavit.

King was taken into custody and told investigators Chumney was "hollering and screaming, calling Bradley" an offensive name, according to the affidavit. She reportedly added that Chumney walked up to Hartley with his shirt raised and said that he didn't have a gun, and that Hartley exited the passenger side of the white Tahoe and shot Chumney in the chest.

Hartley reportedly told investigators he climbed from the back seat to the passenger seat and Chumney ran toward him with a black and silver gun in his hand. Looking down and seeing a silver revolver between the console and passenger side seat, according to the affidavit, Hartley allegedly grabbed the revolver and yelled to Chumney, "If you don't stop, I'm gonna shoot your a * *." Hartley allegedly shot Chumney, started kicking him, panicked and fled on foot, the affidavit said.