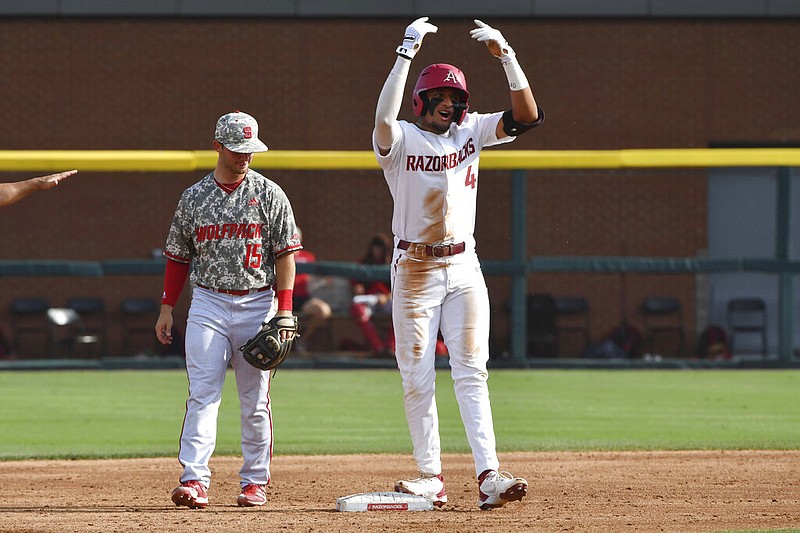 FAYETTEVILLE — Arkansas is one win away from returning to the College World Series.

The top-ranked Razorbacks hammered No. 17 North Carolina State 21-2 on Friday at Baum-Walker Stadium in the first game of the NCAA Fayetteville Super Regional. The 21 runs were Arkansas’ most in an NCAA postseason game, and the Razorbacks’ 19-run margin of victory was also a program postseason record.

The teams are scheduled to play again Saturday at 2 p.m. If Arkansas wins Saturday, it will advance to the College World Series for the third consecutive postseason. If NC State wins, the Wolfpack will force a winner-take-all game Sunday evening.

Smith had the game’s biggest swing — a two-out grand slam in the third inning to give Arkansas a 7-1 lead. It was Smith’s 11th home run and fifth in postseason play. Smith hit three home runs at the SEC Tournament two weeks ago and homered during last week’s regional opener against NJIT.

Moore hit his first home run in the second inning to give Arkansas a 2-1 lead. Moore’s homer to right-center field also scored Welch, who doubled in the previous at bat.

The Razorbacks extended their lead to 3-1 in the third when Casey Opitz singled with two outs, stole second base and scored on Jalen Battles’ RBI single.

Garrett Payne allowed three runs in the bottom of the fifth. Welch hit an opposite-field home run into the right-field bullpen to put the Razorbacks ahead 9-1, and Moore doubled and scored on a two-out Opitz RBI single.

Arkansas put the game well out of reach when it brought 12 batters to the plate during a six-run sixth inning against NC State relievers John Miralia and Coby Ingle.

Brady Slavens had a two-run double and scored on a single by Welch. It was Slavens’ first hit in three games since returning from a sprained ankle that forced him to miss five games.

Opitz, Braydon Webb and Matt Goodheart all walked with the bases loaded in the sixth.

Welch added a bases-loaded walk to begin a five-run rally with two outs in the eighth inning. Zack Gregory scored on a wild pitch by NC State pitcher Cooper King, and Moore followed with a three-run home run to left to bring his team-leading season total to 16 homers.

Heston Tole walked one and did not allow a hit in two scoreless innings. Kole Ramage allowed one run in the ninth.

NC State (33-18) took a 1-0 lead when Jose Torres homered to lead off the top of the second inning. The Wolfpack had a chance to grow their lead after a pair of walks with no outs, but stranded runners at second and third base following good defensive plays by Webb in center field and Moore at second.

Webb, who was playing in place of Christian Franklin (illness), ran down a fly ball in shallow left field, which held NC State catcher Luca Tresh at third. Moore made a diving stop on a ground ball and threw out leadoff hitter Austin Murr at first base to end the inning.

The Razorbacks out-hit the Wolfpack 17-7. Nine of Arkansas’ hits came with runners in scoring position.

Murr’s two-out RBI triple in the top of the ninth was NC State’s first since the fourth inning.