Barling to have entertainment district Aug. 1 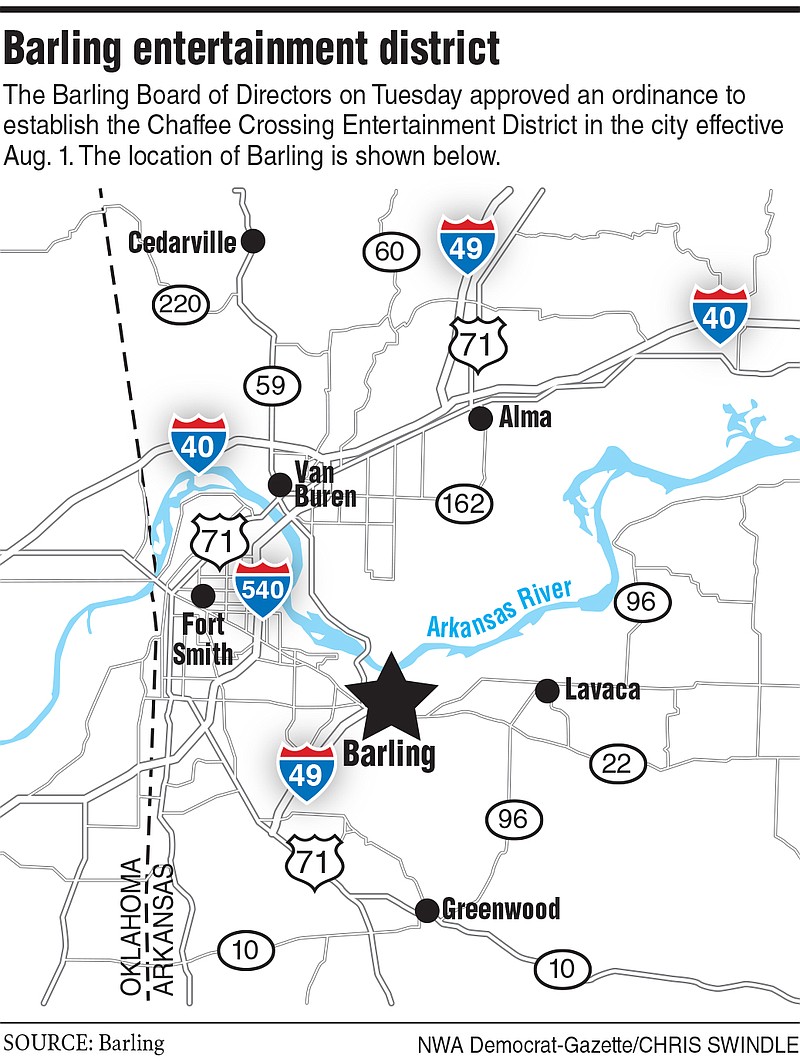 BARLING -- Sebastian County residents will have a new place they can drink alcohol more freely in public.

The board also created an Advertising and Promotion Commission for the city and instituted a 1% hospitality tax.

City Attorney Matt Ketcham said the entertainment district covers about 6 acres and encompasses the Village at Heritage. The Village is a set of commercial spaces that includes a number of restaurants close to the Arkansas Colleges of Health Education in Fort Smith.

The Arkansas Department of Finance and Administration website states areas in Sebastian County outside Fort Smith, such as Barling, are dry, meaning the law prohibits the sale of alcoholic beverages there. However, alcohol can be served at businesses in these areas with a private club permit from the state.

Steve Core, city administrator, said students and faculty at the colleges will primarily benefit from the district.

"The other thing is, for the town, we've had years and years without really any place to go at night, unless you went into Fort Smith," Core said. "So this is going to be some kind of relief."

The ordinance allows restaurants, bars, breweries and vendors at special events within the district to serve alcoholic beverages customers can then carry and drink outside the establishment as long as they stay within district boundaries. The district will operate from 4 p.m. to 10 p.m. Monday through Friday and 10 a.m. to 10 p.m. Saturday and Sunday.

The ordinance specifies alcoholic beverages must be contained in a designated district cup no larger than 16 ounces and must be provided by a participating business.

Kyle Parker, chief executive officer of the Arkansas Colleges of Health Education, said Heritage Pizza Parlour, one of the businesses in the district, has a private club permit. Another business, Las Americas Restaurant, is in the process of getting its own permit. It expects to receive final approval Tuesday.

Barling's move comes after the Fort Smith Board of Directors adopted three ordinances establishing permanent entertainment districts in the city last year: one at The Hub at Chaffee Crossing, one in the Chaffee Crossing Historic Area and another downtown.

Barling's hospitality tax applies to the "gross receipts or gross proceeds from renting, leasing or otherwise furnishing hotel, motel, house, cabin, bed and breakfast, campground, condominium or other similar rental accommodations for sleeping, meeting or party room facilities" in Barling, according to its ordinance. The ordinance doesn't include rental or lease of such accommodations for 30 days or longer.

There are no hotels or motels in Barling, Core said.

The Advertising and Promotion Commission will include four owners or managers of businesses in the tourism industry who live in Sebastian County, two members of the Barling Board of Directors and one person from the public at large who lives in the city, according to the ordinance creating the commission.

Core said the appointment of commission members has not happened, though two city board directors -- Bill Young and Robert Barker -- have volunteered to serve in the two city director seats.