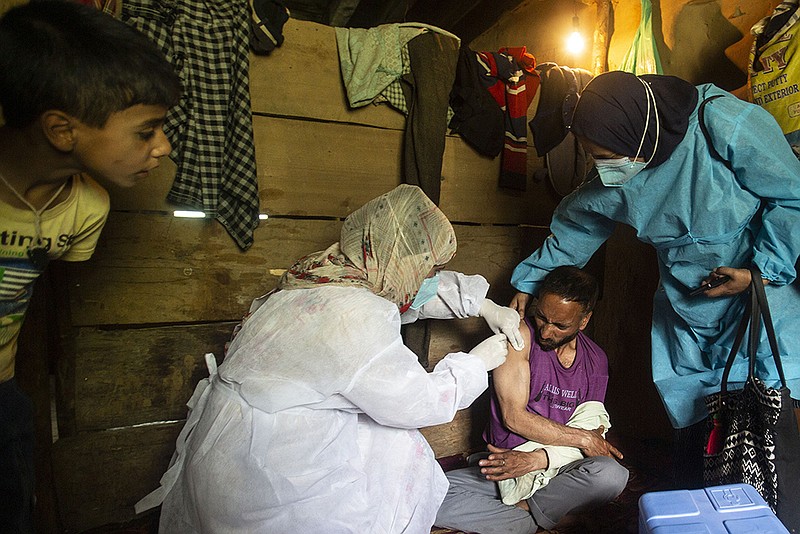 A health worker administers the AstraZeneca covid-19 vaccine to a villager Thursday at his home in Minnar village, north of Srinagar in Indian-controlled Kashmir. (AP/Mukhtar Khan)

President Joe Biden, under pressure to address the global coronavirus vaccine shortage, announced Thursday that the United States will buy 500 million doses of vaccine and donate them for use by about 100 low- and middle-income countries over the next year.

"This is about our responsibility, our humanitarian obligation, to save as many lives as we can," Biden said in a speech in England, before the meeting of the Group of Seven wealthy democracies, which includes Canada, France, Germany, Italy, Japan and the United Kingdom. "When we see people hurting and suffering anywhere around the world, we seek to help any way we can."

Hours after Biden's announcement, British Prime Minister Boris Johnson declared that the G-7 nations are set to commit to providing at least 1 billion coronavirus shots to the world, with 100 million from the U.K.

In recent months, wealthy nations with robust vaccination campaigns have quickly moved toward inoculating large portions of their own populations, but much of the world, particularly Africa, lags far behind, raising fears of more deadly waves that could overwhelm fragile health care systems and spawn new virus variants.

Now, as the leaders of the G-7 prepare to meet in England starting today, they are pledging to help close that gap.

The prime minister's office said the first 5 million U.K. doses would be provided in the coming weeks, with the remainder coming over the next year. Biden's own commitment was on top of the 80 million doses he has already pledged to donate by the end of June.

"At the G7 Summit I hope my fellow leaders will make similar pledges so that, together, we can vaccinate the world by the end of next year and build back better from coronavirus," Johnson said in a statement that made reference to the U.S. president's campaign slogan.

Earlier Thursday, French President Emmanuel Macron welcomed the U.S. commitment and said Europe should do the same. He said France would donate at least 30 million doses globally by year's end.

"I think the European Union needs to have at least the same level of ambition as the United States," he said at a news conference. He added that time was of the essence, saying, "It's almost more important to say how many [doses] we deliver the next month than making promises to be fulfilled in 18 months from now."

The G-7 leaders have faced mounting pressure to outline their global vaccine plans, especially as inequities in supply around the world have become more pronounced. In the U.S., there is a large vaccine stockpile and the demand for shots has dropped precipitously in recent weeks.

[Video not showing up above? Click here to watch » https://www.youtube.com/watch?v=WwlJhiJTlio]

Biden predicted the U.S. doses and the overall G-7 commitment would "supercharge" the global vaccination campaign, adding that the U.S. doses come with no strings attached.

"Our vaccine donations don't include pressure for favors or potential concessions," Biden said. "We're doing this to save lives, to end this pandemic, that's it."

Tom Hart, acting CEO at The ONE Campaign, a nonprofit that seeks to end poverty, said Biden's announcement was "the kind of bold leadership that is needed to end this global pandemic."

"If there was ever a time for global ambition and action to end the pandemic, it's now," he said.

The U.S. commitment is to buy and donate 500 million Pfizer doses for distribution through the global Covax alliance to 92 lower-income countries and the African Union, delivering the first steady supply of mRNA vaccine to the countries that need it most.

The Pfizer agreement came together with some urgency over the past four weeks at Biden's direction, said a senior White House official, both to meet critical needs overseas and to be ready for announcement at the G-7. The official, who spoke on condition of anonymity to discuss internal plans, added that the Biden administration wants to apply the same wartime posture applied to the vaccine rollout in the U.S. to its effort to share vaccines globally.

Biden said the 500 million U.S.-manufactured vaccines will be shipped starting in August, with the goal of distributing 200 million by the end of the year. The remaining 300 million doses would be shipped in the first half of 2022. A price tag for the doses was not released, but the U.S. is now set to be Covax's largest vaccine donor in addition to its single largest funder with a $4 billion commitment.

The well-funded global alliance has faced a slow start to its vaccination campaign, as richer nations have locked up billions of doses through contracts directly with drug manufacturers. Biden's move, officials said, was meant to ensure a substantial amount of manufacturing capacity remains open to the wealthy nations. Just last month, the European Commission signed an agreement to purchase as many as 1.8 billion Pfizer doses in the next two years, a significant share of the company's upcoming production -- though the bloc reserved the right to donate some of its doses to Covax.

The alliance has distributed just 81 million doses globally, and parts of the world remain vaccine deserts.

White House officials said the ramped-up distribution program fits a theme Biden plans to hit frequently during his week in Europe: that Western democracies, and not authoritarian states, can deliver the most good for the world.

U.S. national security adviser Jake Sullivan told reporters Wednesday that G-7 leaders are "converging" around the idea that vaccine supply can be increased in several ways, including by countries sharing more of their own doses, helping to increase global manufacturing capacity and doing more across the "chain of custody" from when the vaccine is produced to when it is injected into someone in the developing world.

Biden, in his remarks, harked back to the Detroit-area workers who 80 years ago built tanks and planes "that helped defeat the threat of global fascism in World War II."

"They built what became known as the arsenal of democracy," Biden said. "Now, a new generation of American men and women, working with today's latest technology, is going to build a new arsenal to defeat the current enemy of world peace, health and stability: covid-19."

He noted that Pfizer's main covid-19 vaccine plant in Kalamazoo, Mich., is not far from Detroit.

Officials say a quarter of that excess will be kept in reserve for emergencies and for the U.S. to share directly with allies and partners, including South Korea, Taiwan and Ukraine. Johnson said the U.K. would follow a similar model with its doses, holding 20% in reserve for bilateral agreements but sending the vast majority to Covax.

China and Russia have shared their domestically produced vaccines with some needy countries, often with hidden strings attached. Sullivan said Biden "does want to show -- rallying the rest of the world's democracies -- that democracies are the countries that can best deliver solutions for people everywhere."

The U.S. plan to donate 500 million more covid-19 vaccines to developing countries was met Thursday with both celebration and hesitation after questions over whether the effort will be enough to help poor regions desperate for doses.

Some health officials and experts expressed hope that the pledge would encourage more donations to ease the inequities in vaccine supplies that have become pronounced in recent months. Other observers stressed that the doses needed to roll out quickly.

"Saving lives requires shots in arms now. Not at the end of 2021, not in 2022, but now," said Kate Elder, senior vaccines policy adviser to the Doctors Without Borders organization. The donated vaccines "better come in sufficient volumes and urgently."

Others have called on the U.S. and the other G-7 countries to do even more.

"Charity is not going to win the war against the coronavirus," said Niko Lusiani, Oxfam America's vaccine lead. "At the current rate of vaccinations, it would take low-income countries 57 years to reach the same level of protection as those in G-7 countries. That's not only morally wrong, it's self-defeating given the risk posed by coronavirus mutations."

Additionally, the Biden administration's decision to donate Pfizer vaccines raised doubts about whether the doses would reach the poorest of the poor because those doses need to be stored in ultra-cold conditions. Many low-income countries with limited infrastructure will probably be unable to take them to their most remote areas.

The Africa Centers for Disease Control and Prevention said it would advise its countries to use the Pfizer shots in major cities.

Still, the administration's promise was "clearly a cause for celebration," said Dr. John Nkengasong, director of the Africa organization, particularly at a time when infections are increasing on the continent of 1.3 billion people, and some countries still have not administered a single dose.

"Absolutely, it's going to be a big help," Nkengasong said.

The donation of the Pfizer shots is crucial because the global disparity in vaccination has become a multidimensional threat: a human catastrophe, a $5 trillion economic loss for advanced economies and a contributor to the generation of mutant viruses, said Jerome Kim, head of the International Vaccine Institute, a nonprofit dedicated to making vaccines available to developing countries.

The gaps in vaccine access are clear: The U.S. and Britain have fully vaccinated more than 40% of their populations, according to a global tracker kept by Johns Hopkins University. Countries like Haiti, on America's doorstep, Burundi and many others have vaccinated few, if any, of their people.

"So far, 77% of all the vaccines administered have gone into the arms of people in 10 countries," said Covax co-Chairman Jane Halton. "Now that has got to change."