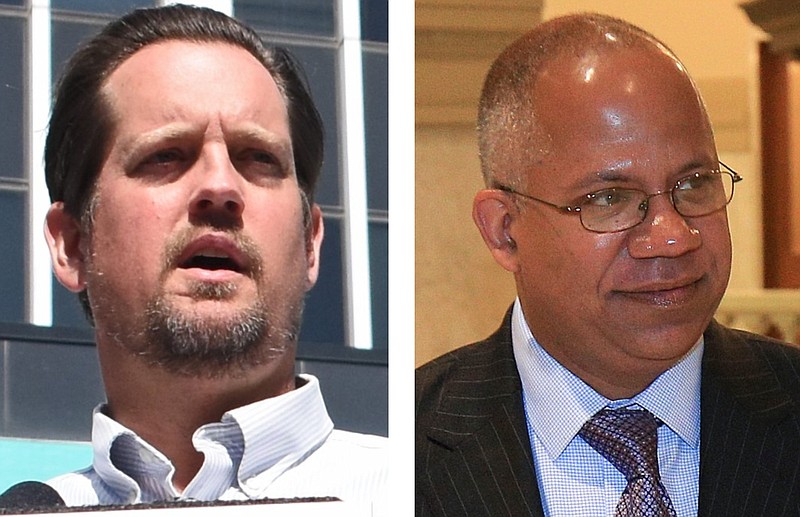 The executive director of the Downtown Little Rock Partnership recently sought the city's immediate assistance because of activities at a downtown parking deck that he said had prompted state employees to quit their jobs or park elsewhere because they felt unsafe.

The email exchange occurred about a month before a forum Tuesday on crime with Police Chief Keith Humphrey hosted by the downtown group.

According to records obtained by an Arkansas Freedom of Information Act request, in a May 11 email to City Manager Bruce Moore, organization executive Gabe Holmstrom wrote, "Bruce -- I'm sounding the alarm."

The issue was the parking deck at Sixth and Scott not far from the organization's office at 101 E. Capitol Ave.

Holmstrom requested "immediate help from [the Police Department] to secure it and deter the people up to no good from using the deck as their personal toilet and drug haven."

"In recent weeks the complaints are coming in daily and at an increasing number," Holmstrom wrote. "In my 6 years here I have never seen it at the fever pitch that currently exists. State employees are quitting their jobs or opting to pay for parking somewhere else due to them not feeling safe to park."

That day alone Holmstrom had fielded three calls about incidents in the parking deck, he wrote.

"We have previously alerted [the police] to this issue on multiple occasions," he told Moore. "The behavior at the deck has become even worse."

Holmstrom added, "We have temporarily hired private security for the early morning hours to deter folks from being in there at the start of business. They are routinely running people off, but now the problem is escalating during the daytime hours."

Holmstrom told Moore that he had spoken to a lieutenant that day and passed on the contact information of downtown sergeants to individuals in the Main Street mall.

Moore wrote to Humphrey to bring the message to his attention, records show.

"I believe you have a meeting this week with Gabe and other downtown leaders," Moore wrote in an email. "Please be sure we are proactive in addressing this situation."

Humphrey confirmed he would.

Some 75 people attended the Tuesday event at Ron Robinson Theater in the River Market District, which was billed as a public forum for partnership members to hear about policing and crime in the district.

However, Holmstrom barred news reporters from attending the forum, and Humphrey declined to answer questions from the newspaper after the event.

In a phone interview Thursday, Holmstrom said the Downtown Little Rock Partnership's personnel use the first floor of the parking deck.

People who work in the Main Street mall building park in the structure and use a skywalk to cross the street and access the building, he explained. At all hours, the skywalk can be accessed from the second floor of the parking deck, he said.

"Then other folks who are not working and not employed and not renting space in the deck would be in there," Holmstrom said. They would be there charging their phones, smoking or urinating, he said.

People also would spend time in the parking deck's stairwells, which are enclosed and therefore offer shelter from the elements, unlike other parking decks downtown, he said.

"So this provides, obviously, shelter from the elements and a good place for people that are up to no good or wanting shelter for them to spend time," he said.

Asked why he went directly to Moore, Holmstrom said the level of activity was "unprecedented" from his time here.

"I just hadn't experienced anything like that," he said.

He said the complaints have stopped for the time being. Based on talking to others in the building, Holmstrom said "people seem to have moved on and are no longer spending time in the skywalk area."

The electrical outlet where phones could be charged was removed, he said, and overnight security guards were hired for about a week.