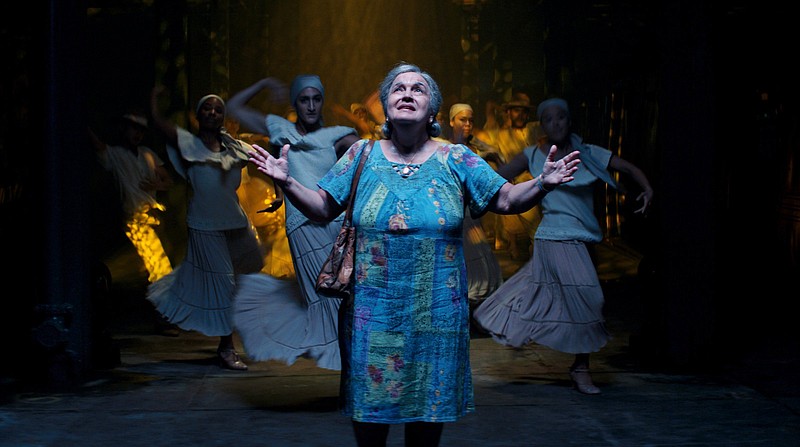 Winner, Winner: Abuela Claudia (Olga Merediz) reminisces about her impoverished Cuban childhood and an imminent change of fortune in “In the Heights.”

There’s a beating heart within every frame of “In the Heights,” the film adaptation of Quiara Alegria Hudes and Lin-Manuel Miranda’s Tony-winning musical directed by Jon M. Chu.

It comes from the joy of young romance in Washington Heights — between bodega owner Usnavi (Anthony Ramos) and aspiring stylist Vanessa (Melissa Barrera), as well as dispatch worker Benny (Corey Hawkins) and Stanford student Nina (Leslie Grace). It’s seen in the spirited song and dance sequences that leap from the doors of a chatty hair salon and spill out into a July-hot alleyway and off the screen. The root of this passion is a rich tapestry of female Hispanic history, and what it means to remember, celebrate and pass it down to younger members of the community who have their own dreams.

“How do we reckon our particular challenges and dreams with those of a different generation?” Hudes asks on Zoom. “How do we understand what each other have faced and struggled?” That question could best be answered by the barrio’s fierce matriarchs, Abuela Claudia (Olga Merediz), who emigrated with her mother from Cuba in the 1940s, and Daniela (Daphne Rubin-Vega), the gregarious coiffeuse whose salon has been the center for conversation and social activity for years. “Abuela is the matriarch and I call Daniela the priestess,” Rubin-Vega says proudly.

ELDER ON THE BLOCK

The Panama-born, two-time Tony-nominated actress, who originated the role of Mimi in “Rent,” is now in the role of an elder on the block — one of the women who keep the residents honest about their cultural strength while empowering them to explore their own identity. “[They] give permission for our histories to evolve, to incorporate new customs and yet remain grounded in the legacy that we have brought from wherever we’ve come.” When Nina is torn between staying on the block where she has thrived with people she knows and loves, or returning to college where she feels culturally isolated, it is Abuela Claudia who reminds her that she can take pieces of herself wherever she goes, as Claudia has with her own mother’s embroidered napkins. She describes them as “little details that tell the world we are not invisible.” Similarly, Daniela admonishes her millennial patrons as well as her colleagues (played by Dascha Polanco and Stephanie Beatriz) for mourning the fact that their favorite salon has been priced out of the neighborhood and will move less conveniently to the Bronx. “Our people survived slave ships, Taino genocide, conquistadores,” she sings. Certainly, they “can survive the D train to the Grand Concourse.”

“The thing that I love about Daniela is she has such a wild and positive sense of humor that she actually can address somewhat painful episodes in history with levity,” Hudes says about the character, who is inspired by an amalgam of cousins, her Puerto Rican mother and other female spiritual leaders she saw growing up in Philadelphia. “I love her ability to call people out and call them in just with a joke.” While it sometimes shares critical messages with a wink and a smile, “In the Heights” — in theaters and on HBO Max today — is no less urgent in the truth that Hispanic people have a storied heritage, one that should embolden them even in places they may feel unseen and unheard, including in their own gentrifying neighborhood. And it is up to women like Abuela Claudia and Daniela, who have no biological children of their own but watch out for people in their community as if they do, to show them the path that has already been paved.

For Hudes, that’s the heart and soul of her screenplay. “If they weren’t chroniclers, what would happen to the community’s history?” she asks. “It ain’t in the books that are taught in that community’s public schools. Abuela Claudia and Daniela know this, and are spreading the gospel of who we are, what our ethics are, what our history is, what matters to us.”

That’s a lesson Merediz, who like her character is Cuban American and calls New York home, had already learned from her own mother growing up and brought to life when she originated the role on Broadway in 2008. But now, performing the film version of “Paciencia y Fe”— or as Ramos calls it, “the mic drop” — resonates with her on a whole new level. The song movingly traces Abuela Claudia and her mother’s journey, from being unable to find food and work in Havana to struggling to learn English as domestic workers in New York.

“Just thinking about Abuela Claudia, I tear up,” the actress says. “I have gotten much closer to my own mother in recent years. So, I’m identifying more with her and understanding her more, her struggles and what she had to go through as an immigrant to raise a family and work and go to school.” It’s a personal history that propels Merediz and clearly informs her work. “It’s crucial to tell your stories to the young people so that they know who you are,” she says. “Our elders, our food, our music — all of that comes from somewhere. It’s something that I try to do in my own life so that I can leave something for the people that are coming after me.”

She’s certainly made an impact on Miranda, who also gets emotional thinking about her portrayal. He remembers being 19 years old and writing Abuela Claudia, inspired by his own Abuela Mundi, and the lyrics of “In the Heights” when he was struggling to carve a career for himself as a Hispanic on the Great White Way. With the help of Hudes, he wrote himself as leading man Usnavi (though in the film he has a smaller role, as the Piragua Guy).

“It’s been literally half my life,” he says, laughing. “I am finally getting to see the movie of this thing that really began because I desperately wanted a life in this business and didn’t see the roles for me. I don’t dance well enough to play Bernardo [in ‘West Side Story’] or Paul in ‘A Chorus Line.’ And for Puerto Rican dudes, that’s it.” Miranda realizes that the community, in the film and beyond, is in debt to women like Merediz who climbed their way to the top and helped make the road a little easier for those who came after them. “We stand on Abuela Claudia’s shoulders, Olga’s shoulders, Priscilla Lopez’s shoulders, Rita Moreno’s shoulders and Chita Rivera’s shoulders, who had to make a way where there was no way,” he says, holding back tears. “The woman [Merediz] who had to play [a] maid after [portraying a] doctor gets a f* * *ing aria in this movie.”

The movie “In the Heights” is a way for him to now pass the baton to younger actors including 29-year-old Ramos — best known for originating the roles of John Laurens and Philip Hamilton in Miranda’s “Hamilton” on Broadway — a fellow Nuyorican who’s similarly contended with Hollywood racial bias and feels just as beholden to those who paved the way.

“I just pulled from the ancestors,” Ramos says of his performance. “There was a store owner named Leo who ran the bodega around the corner from where I grew up. He knew everything, all the gossip, was friends with everybody in the ’hood. Usnavi reminded me of a younger version of him.” Like Leo, Usnavi is the centerpiece of the block, the man working with the dream of returning to the Dominican Republic. But before he does, he makes sure he passes down the names of phenomenal Hispanic women in history — such as Celia Cruz, Frida Kahlo and the Mirabal sisters — to children in the neighborhood to empower them throughout their lives.

“I feel that Usnavi’s telling these children about the matriarchs,” Hudes says. “When he’s talking to these little girls, there’s not one model of what strength looks like. You’re going to hit roadblocks. He’s quizzing them. One of the girls adds, of course, ‘You forgot Supreme Court Justice Sonia Sotomayor.’”

This moment is vindication that not only have stories about cultural legacy been inherited, but they’re cherished so much they can be recited to the teacher without prompt.

“I like the notion that even though there’s absolutely male and female characters, that in some ways it’s about also passing on notions of what all the different paths can look like to be a strong Latina,” Hudes says. “That’s what Usnavi’s doing with those kids.” That’s what “In the Heights” shows with Nina and Vanessa as well. They’re young women on the cusp of launching their own stories beyond what has been predestined. For Nina, it’s the many sacrifices of her father (Jimmy Smits) to send her to college, and for Vanessa, it’s her desire to make a name for herself downtown and untethered to the close-knit barrio.

“In the Heights,” a story written out of a yearning to expand the images of Hispanic people while celebrating their cultural journeys, bridges the past and present for a promising future that would please the ancestors — showing that it can not only be accomplished but that it is necessary.

Miranda feels a deep sense of fulfillment knowing that he has done just that, even as he continues to be boosted by his foremothers. In his own way, he has helped clear a path for others like the one that was cleared for him. This almost immediately hit him when he stepped onto the film set.

“I’m rolling by as the Piragua Guy,” he recalls fondly, “and I said, ‘Jon, just give me one take where I want to try something.’ I’m just supposed to say, like, ‘¿Cómo estás, Señor Usnavi?’ And I turned to [Ramos], touched his face and said, ‘I’m so proud of you.’” 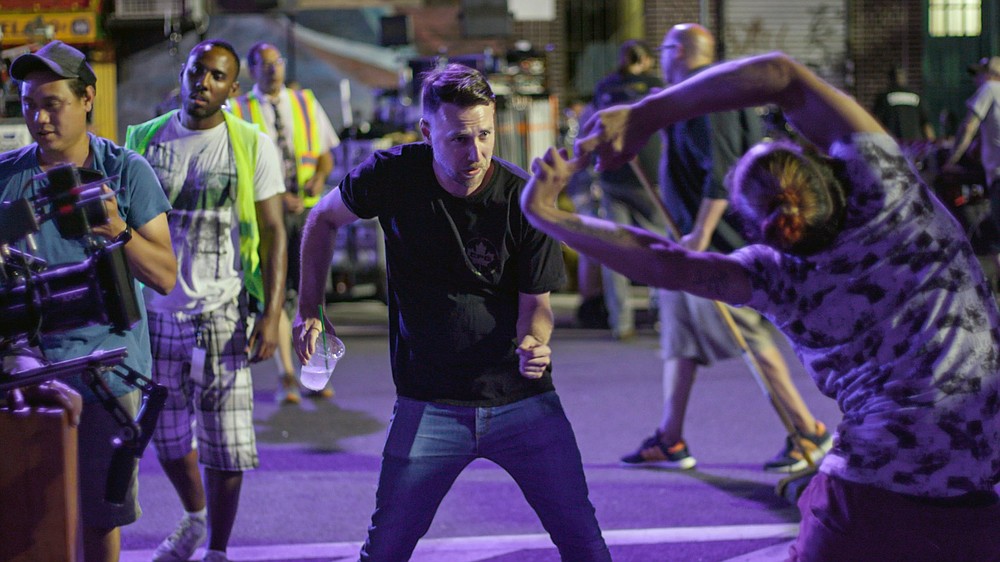 One and two and three and four: Choreographer Christopher Scott works with dancers on a large scale number the set of “In the Heights.”
ADVERTISEMENT