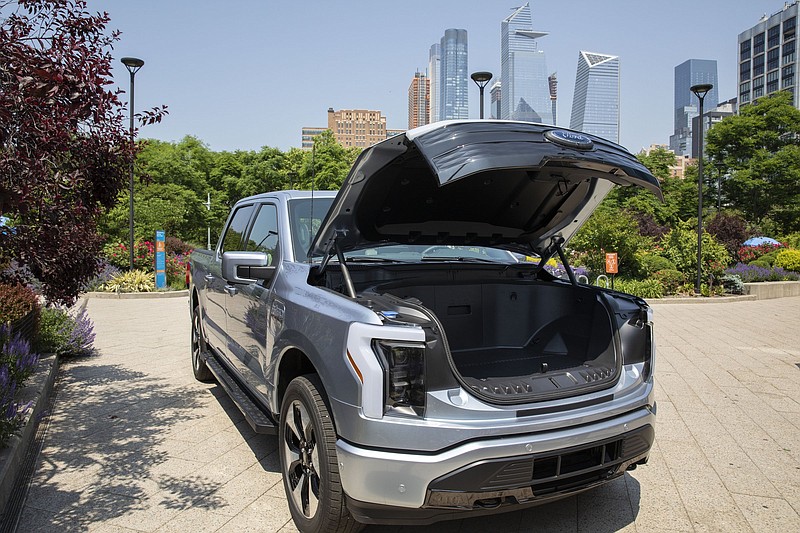 An electric Ford F-150 Lightning sits on display in New York City last month. The pickups are set to roll off the assembly line next year at a new high-tech factory at Ford’s Rouge complex in Dear- born just outside Detroit. (AP)

The company has confirmed reaching 100,000 reservations since the pickup's global debut three weeks ago at world headquarters in Dearborn, Mich.

"We're super excited about the demand," Emma Bergg, Ford spokeswoman, told the Detroit Free Press on Thursday. "Reservations are getting added all the time."

The official order bank opens later this year, she said.

The automaker accepts $100 refundable reservations to place an order for the 2022 pickup that will be built in a new $700 million plant at the Rouge Complex in Dearborn.

Making online refundable reservation orders is part of a new protocol for carmakers. Ford did the same with its all-electric Mustang Mach-E.

Meanwhile, Ford is touting its ability to recruit top talent to develop the latest digital technology as the company increases its all-electric and hybrid vehicle options.

Ford chief executive Jim Farley has said the company will use data and software expertise on a scale the industry hasn't seen. It is a key part of a strategy to offer digital services and subscription revenue that changes car sales from a one-time transaction process.

Industry analysts and the media have wondered whether the Ford team can find the talent it needs to lead a high-tech era.

Consumers have moved from enhancing technology at home to asking for more technology in their vehicles. That means carmakers need software engineering talent.

Silicon Valley companies have taken great pride in the quality of their software engineers, including all-electric carmaker Tesla.

Will that technological talent so in demand in California work for a legacy automaker?

The challenge is reorienting Ford to think about software experiences before we think about anything else," Farley told reporters after his May 26 presentation to Wall Street analysts. "That's the change. That's the really big opportunity for us ... throughout the organization."

The automaker had more than 7,000 software engineers in the U.S. and Canada working on design, architecture, data, testing and other technical and infrastructure roles as of Thursday, said Marisa Bradley, Ford spokeswoman.

Farley, who took the helm as CEO on Oct. 1, began the push to hire software engineers in a previous role at the company leading technology. Former CEO Jim Hackett announced in April 2019 an enhanced focus on new business, technology and big data.

"We have hired 600 software engineers this year alone, so that is certainly more than we have in one year before," Bradley said. "The push started before Jim Farley became CEO, but he was in the new business role, so he certainly was a catalyst."