Reason for alarm? Hogs’ bats could use wake-up call 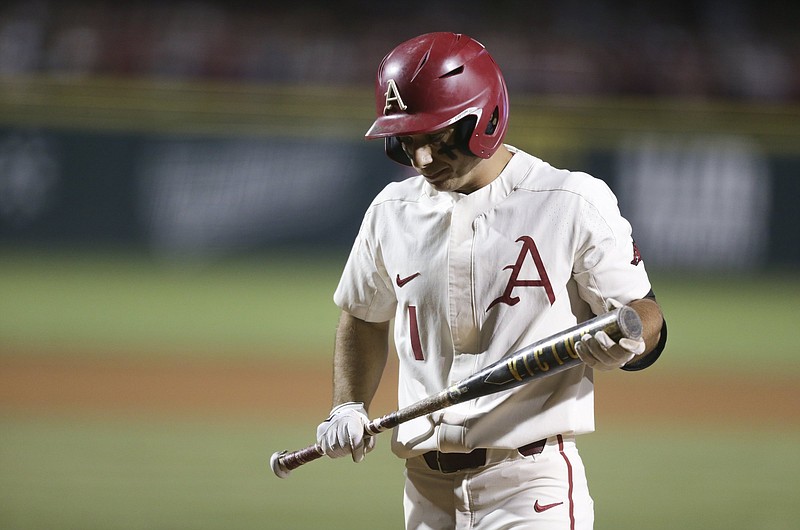 Arkansas’ Robert Moore heads to the dugout after striking out against Nebraska during the NCAA Fayetteville Regional. The Razorbacks’ hitters have struggled in recent games as they open against North Carolina State in the super regionals today. (NWA Democrat-Gazette/Charlie Kaijo)

FAYETTEVILLE -- The Arkansas Razorbacks are again the betting favorite to win the College World Series based on revised odds released this week heading into the eight NCAA super regionals.

The top national seed and consensus No. 1 for more than two months, the University of Arkansas has a remarkable track record for winning every weekend, all 16 weeks this season, though seldom in overpowering fashion.

The Razorbacks (49-11) host piping hot North Carolina State (33-17) this weekend, with the best-of-three series starting tonight at 5 at Baum-Walker Stadium.

If Arkansas can extend its streak of winning weekends, Coach Dave Van Horn will take the program to its third consecutive College World Series.

[Video not showing up above? Click here to watch » https://www.youtube.com/watch?v=_LB30mzaKLI]

Ace reliever Kevin Kopps (12-0, 0.68 ERA, 11 saves) has been the driving force for the Razorbacks, reliable every weekend since a rough outing in the season opener against Texas Tech. The right-hander threw 185 pitches and delivered two wins and a save in last week's regional victories over NJIT and No. 19 Nebraska twice.

Behind Kopps, the statistics say there are Razorbacks scuffling at the plate and on the mound in recent weeks.

Wicklander has provided a series of quality starts since breaking into the rotation, despite a short outing in the Hogs' 6-4 win over Vanderbilt in a winner's bracket game at the SEC Tournament.

But the starts behind him from Lael Lockhart (3-3, 4.50), Caleb Bolden (2-0, 4.50) and others have been hit and miss, with Kopps and other members of the bullpen filling in a lot of the crucial innings down the stretch as Arkansas won the SEC regular season and tournament championships.

Asked about his pitching rotation for the super regional, Van Horn said Wicklander would start tonight, then there are question marks.

"We're going to do what we can to win Friday," he said. "I mean, what rotation? We don't have a three-man rotation. We've got a one or a two, and then we go from there. So we'll just try to win tomorrow and figure out who we need to throw on Saturday."

The Razorbacks' team earned run average of 3.77 is 22nd nationally and fifth among the 16 teams still playing.

While Arkansas continues to produce runs, ranking 15th nationally with 7.6 per game, and its home run count of 102 is second nationally and the most of any remaining team, it has a handful of key players fighting hitting slumps.

Almost all of the batters who typically hit in the 1-6 slots in the batting order, with the exception of Cullen Smith, have been on downward trends at the plate going back two-plus weeks.

Still, North Carolina State Coach Elliot Avent recognizes the Hogs for their slugging, power and depth in the lineup.

Freshman Cayden Wallace, who has played third base and right field lately, is hitting .111 (4 for 36) with 13 strikeouts in the last 10 games.

And first baseman Brady Slavens, who had the top batting average among regulars prior to his ankle injury against Georgia in the first game of the SEC Tournament, is in a 5-for-30 skid (.167) with 13 strikeouts in the past eight games.

Each of those players has had a customary role among the top five hitters most of the season. But it's really a team-wide dip of late.

Since cresting with a .290 batting average after a 13-0 win over Texas A&M on April 17, the Razorbacks have trickled downward in batting average, while almost keeping their same scoring pace.

Arkansas last saw .280 after defeating Georgia 5-3 in a series finale on May 9. The team average had been in the .270s for 15 consecutive games before slipping to .269 after Monday's 6-2 regional clincher against Nebraska.

The Razorbacks' .269 hitting ranks 139th nationally and 14th among the 16 remaining teams.

Catcher Casey Opitz said it is important that several hitters catch fire this weekend and the rest of the postseason.

"I think we played three good innings, and that was those last three innings of the last game," Opitz said. "I think other than that we didn't play good baseball or baseball we're used to playing. With the stage we're on, guys are coming out there and facing really good pitching.

"Obviously, we're getting everybody's best shot. Didn't matter who they were. Last week, we were getting everybody's best pitching because they had to go through us in our regional. ... It's baseball, it's going to be tough. You're going to have bad stretches. You're going to have good stretches. Focus on how to be in that pitch and worry about winning the game."