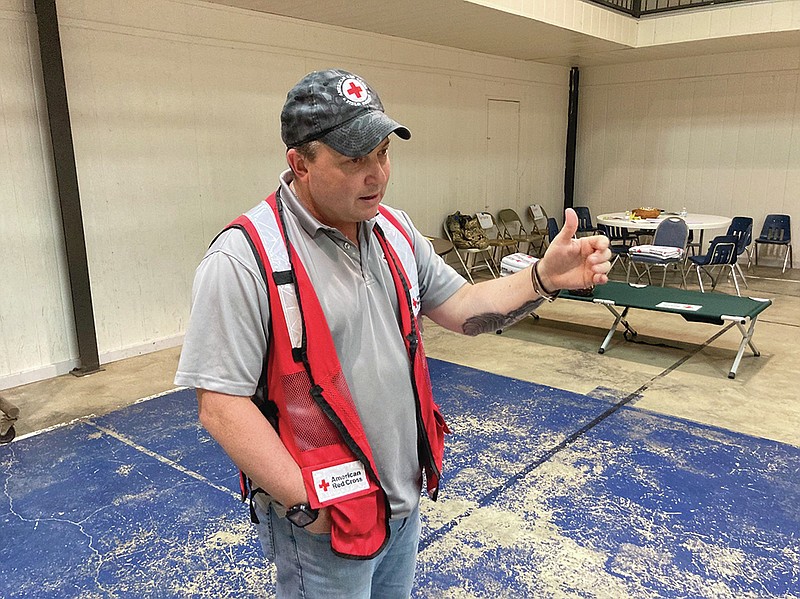 Mike Ingram, an official with the American Red Cross, discusses Thursday the process for assessing flood damage in the area around Gould, where the agency has set up a shelter. (Pine Bluff Commercial/Byron Tate)

Five damage assessment teams with the American Red Cross fanned out around Gould and Dumas on Thursday to determine how residents and their homes have made it through days of stormy weather that dropped more than a foot of rain in many areas.

Mike Ingram, senior disaster program manager for Missouri and Arkansas, said the teams would finish their work by Thursday evening, allowing the Red Cross to be able to start providing assistance to people.

"We do have homes with major damage or are destroyed," said Ingram, standing in a gym at Marzell Missionary Baptist Church on U.S. 65 in Gould where the Red Cross had set up a shelter earlier in the week. "These damaged homes are literally spread from Stuttgart to Gould and on to Dumas and some in McGehee."

Sprinkled around the gym were a dozen or so folding cots with blankets wrapped in plastic laid neatly on top. Ingram said the shelter was ready for 10 people at the moment, but if necessary, there were enough cots and blankets in the trailer to handle 100.

"They're for anybody who needs a place to stay," Ingram said.

In all, Ingram said he has about 20 people helping out in Gould. The two-person assessment teams were collecting detailed data that will be used to gather and deliver the "disaster equipment supplies" that residents need to get back on their feet.

"As you can imagine, whatever you might need to clean up a house after several inches of water and mud have come in, we offer," he said. "Bleach, gloves, shovels. Whatever things they might need. Bug spray. Just anything you can think of."

Ingram described the Red Cross as a "short-term recovery" agency that helps people in the first 24 to 72 hours of a disaster.

"We take care of food, water, shelter and clothing," Ingram said. "After that, our caseworkers help people get assistance from the United Way, the Salvation Army, church and such as that."

The amount of assistance a family receives depends on how many people are living in a damaged house and, in the case of high water, how deep it got. If there was at least 18 inches of water in a house, based on a FEMA designation, Ingram said, additional assistance from the Red Cross is available.

The disaster assessment teams, he said, are seeing many homes with 3 to 5 inches of water inside, but some are reaching the higher threshold.

"If the house was built in a low spot or a trailer isn't on enough cinder blocks, that's where we are seeing problems," he said. "In one place, a house is sitting close enough to the railroad tracks that every time a train comes through, the train pushes water right into the house."

Ingram said that so far, no one had chosen to spend the night at the shelter, although he said there had been steady traffic during the day with people wanting assistance of one type or another. He said Red Cross officials chose Gould because it was "center of gravity" for the flooding problems the region had seen.

"When 15 or 16 inches of rain fell down here and the National Weather Service issued a life threatening flood warning, when that happened, that was our trigger," Ingram said. "We called pastor [Lamar] Brooks and he said 'the door is open.'"

As Ingram spoke, a woman who declined to give her name walked into the gym and asked if she could have some water. A member of the Red Cross team said there was none at the moment but that more was on the way and asked the woman to return in an hour or so. She said she would.

The woman said she lives in Gould, and, while her house had not been damaged, she needed water because the city was under a boil order.

She said the cause was that the city and the water treatment system had lost electricity for several hours earlier in the week.

Gould Mayor Matthew Smith said the electricity had been off for three hours and to be safe, he had issued the boil order, although he said the water was probably OK to drink.

"I put the boil order on, just in case the (Arkansas Department of Environmental Quality) was to question us," Smith said. "And I've left it on because the water supervisor hasn't said to take it off yet."

Ingram said his assessment teams will transfer to Stuttgart this morning to begin looking at those water-damaged areas. He said he is a paid Red Cross employee but that 90% of his workers are volunteers.

"It's amazing," he said in thanking them. "There's no way we could do what we do without these people who give up their time to help."

Asked how long the shelter would be in place, Ingram said he didn't know, but likely until things dry out a little.

"It rained 3 or 4 more inches today," he said, shaking his head.

In response to the emergency, the Red Cross has established a hotline for residents in need to call. The number is: (417) 447-7180.

Earlier Thursday, Gov. Asa Hutchinson declared a state of emergency because of the flooding in southeast Arkansas. In doing so, he freed up $100,000 from an emergency response fund that can be used by emergency officials to provide assistance to the area. Hutchinson also was planning to visit Dumas this morning to assess the damage.

While many areas have seen double-digit rainfall totals this week, the Agricultural Research Station at Rohwer, located in Desha County, recorded more than 19 inches in a 48-hour period, making it the second-highest total ever recorded in Arkansas, according to the National Weather Service. Because of the flooding, the state Department of Transportation closed highways in Arkansas, Desha, Lincoln, Monroe, Ouachita and Phillips counties, according to state officials.

A news release from the state cooperative extension service said crop damage is likely to be significant in the area, although the full extent will not be known for some time.