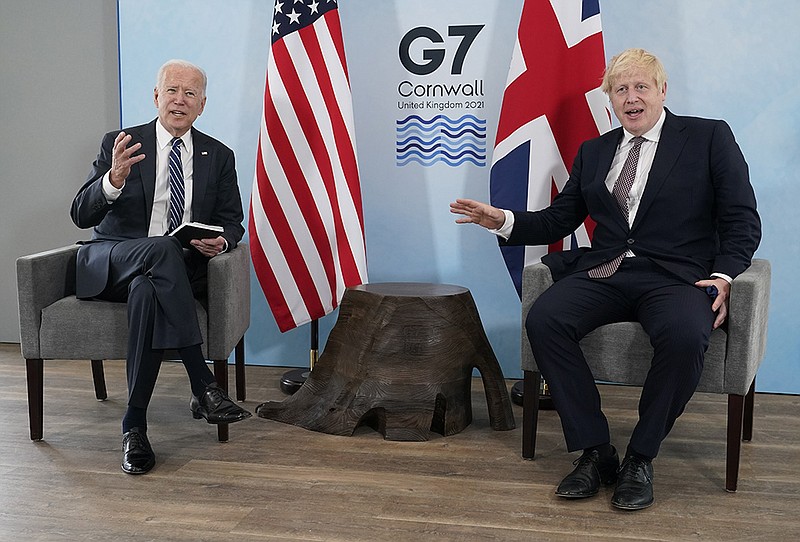 PLYMOUTH, England -- President Joe Biden and British Prime Minister Boris Johnson agreed during an allied summit Thursday in England to a path toward reopening travel between the United States and the United Kingdom, part of a much broader effort to renew the 80-year-old partnership between their countries with a flurry of new cooperation.

During a meeting ahead of the Group of Seven summit that starts today, the two leaders, despite their political and personal differences, highlighted new opportunities for collaboration on major global challenges, including climate change, to demonstrate the resilience of the world's democracies.

Besides announcing a new working group to determine how to ease pandemic-related travel restrictions, Biden and Johnson unveiled new efforts to boost global coronavirus vaccine supplies, including a U.S. donation of 500 million doses of the Pfizer vaccine for underserved nations, and more ambitious commitments to reduce carbon emissions to slow the pace of climate change.

In a gesture heavy with symbolism, they examined the original Atlantic Charter, the declaration signed by President Franklin D. Roosevelt and Prime Minister Winston Churchill in 1941 that set out American and British goals for the world after the end of World War II.

Reaffirming their nations' long-standing ties, the two men authorized an updated version of the charter, one that looks to the challenge posed by countries like China and Russia with its promises to promote free trade, human rights and a rules-based international order as well as to counter "those who seek to undermine our alliances and institutions."

The new charter also took aim at "interference through disinformation" in elections and murky economic practices, charges that the West has leveled at Beijing and Moscow. The leaders also promised to build stronger global defenses against health threats on the eve of a summit where discussion of the coronavirus pandemic is expected to take center stage.

"We intend to strengthen the institutions, laws and norms that sustain international cooperation to adapt them to meet the new challenges of the 21st century, and guard against those that would undermine them," the revamped charter states.

[Video not showing up above? Click here to watch » https://www.youtube.com/watch?v=cASOub2mBCw]

According to a joint statement after their meetings, Biden and Johnson also agreed to pursue a bilateral technology agreement to reduce barriers for British tech firms in working with U.S. companies; it could be signed next year. The two leaders also agreed to open a new dialogue on energy, and they committed to holding a joint summit in the coming months on boosting efforts to find a cure for cancer.

As they convened for the first time, Johnson seemed to speak on behalf of the other leaders convening for the Group of Seven summit this weekend, telling Biden, "Everybody's absolutely thrilled to see you."

After the talks, Johnson told reporters the meeting affirmed a bilateral relationship that he said was of "massive, massive strategic importance for the prosperity, the security of the world." Biden, he continued, was "a breath of fresh air."

However, the first meeting between these two leaders wasn't without a measure of awkwardness, which both leaders sought publicly to defuse.

This awkwardness was mostly related to Brexit and unresolved issues stemming from the U.K.'s exit from the European Union late last year -- a geopolitical disruption that threatens the Good Friday Agreement, which is the enduring deal for peace in Northern Ireland that was brokered more than two decades ago largely by American politicians, including Biden.

Johnson, asked about that issue after the talks with Biden, said he's "optimistic" that all sides will find a way to maintain the Good Friday Agreement.

Biden, who opposed Brexit, has already made clear to Johnson, who rose to power by supporting it, that the United States expects to see the peace treaty maintained, according to national security adviser Jake Sullivan. It would be up to Biden and Johnson, Sullivan said, to work out the particulars.

"Whatever way they find to proceed must at its core fundamentally protect the gains of the Good Friday Agreement and not imperil that," Sullivan said earlier this week when asked about the message Biden wanted to send.

Johnson, dubbed the "British Trump" including by the former U.S. president, began his rise to power when British voters narrowly approved the 2016 Brexit referendum he supported. Johnson was elected prime minister in 2019 and inherited the complex job of carrying out Brexit.

Brexit has tested the bonds between the U.S. and U.K. But Biden has made clear that he intends to rebuild bridges with the EU, a frequent target of former President Donald Trump's ire. That suggests Berlin, Brussels and Paris, rather than London, will be uppermost in his thoughts.

As he looks to demonstrate his country's strength and resilience as an independent entity outside the EU, Johnson finds his nation perhaps more reliant on the U.S. That is evidenced by the desires for a new, bilateral trade pact between the two nations and for continued and expanded security cooperation.

Britain hoped to secure a quick trade agreement with the U.S. after its official departure from the EU in January. The change in administration in Washington leaves prospects of a deal uncertain.

"What we're seeing in a post-Brexit U.K. is a U.K. that wants to stay as close as possible in lockstep with the United States on its military posture, particularly on technology and cyber capabilities," said Heather Conley, a Europe specialist at the Center for Strategic and International Studies, a Washington think tank.

Trump's defeat, however, seemed to leave Johnson with a less compatible personality in the White House -- one who speaks with pride about his Irish heritage, for example. During the 2020 campaign, Biden even referred to Johnson as a "physical and emotional clone" of Trump.

The British government has worked hard to overcome that impression, stressing Johnson's common ground with Biden on climate change, support for international institutions and other issues. But Johnson, host for the Group of Seven summit, has been frustrated by the lack of a new trade deal with the United States.

But the two leaders appeared chummy enough when they appeared before the news media at the meeting's outset, with Biden bantering about how they both "married above their station" and Johnson responding in kind: "I'm not going to disagree with the president on that or indeed on anything else, I think, either."

But it was first lady Jill Biden who made perhaps the clearest statement without speaking a word. Her jacket, the back embroidered with sequined letters reading "LOVE."

"I think that we're bringing love from America," she said. "This is a global conference, and we are trying to bring unity across the globe."

Meanwhile, German Chancellor Angela Merkel has her own set of priorities for the G-7 meeting. She is part of a heavyweight European contingent to the G-7 on England's southwest coast that is emerging from the pandemic unusually united and determined to carve out a bigger global role on a par with its U.S. ally.

For the chancellor, Emmanuel Macron of France and Italy's Mario Draghi, as well as European Union leaders that get a seat at the table, feel that collectively they need to get out from under America's shadow and influence policy in Washington rather than meekly accept the U.S. line.

The G-7 will show the world "that the alliance and their leaders are back after Trump and the pandemic to tackle global problems," said Peter Beyer, the German government's transatlantic coordinator. Still, he said, "it's not just about returning to the old Western alliance, but rather about forging a new West."

As Biden flies in for the G-7, a NATO summit, EU-U.S. talks, then a meeting with his Russian counterpart Vladimir Putin, there is a sense in Europe of a chance to advance its cause.

In fact, Europe's leaders have a degree of certitude that they've been proved correct on matters from climate to Iran and have a right to make their views heard. Four years of Trump created a lot of mistrust but also a conviction that Europe should be less submissive to America, said one person working on the EU-U.S. summit.

"The European Union can be the front-runner when it comes to the ideas for the world," European Council President Charles Michel, who will attend the G-7, said in an interview this week. Citing summit topics from climate action to taxation and vaccine certificates, he said the EU has more influence than it's given credit for, and "sometimes in Europe we forget that."

That differs from the Biden administration's emphasis on a post-Trump return to American leadership. Moreover, European officials talk of disappointment that Biden's policies bear some hallmarks of Trump's America First stance.

The EU raised concerns with the U.S. about Biden's surprise withdrawal from Afghanistan, where several member states, including Germany, have troops, according to people familiar with the discussions. One official said that the new administration seems to bank on goodwill simply because Biden is not Trump.

"We expected more change with Biden," said Francoise Nicolas, director of the Center for Asia Studies at the French Institute of International Relations in Paris.

Most pressing of all for Merkel, though, is she won't be standing in September's German election, meaning this is her G-7 swansong. She's not about to take a back seat, though, and will push for a clear signal to both Minsk and Moscow over recent events in Belarus and Russia's involvement, according to a senior German government official with knowledge of her thinking.

Disputes linger with the U.S. on the Nord Stream 2 gas pipeline, a point of contention taken up by Trump and maintained under Biden. A delegation from Berlin met with Sullivan in Washington last week but little progress was made. Merkel fundamentally sees it as an issue for Germany and Europe alone, according to a German official.

Trump made no secret of his disdain for the EU, NATO and for Merkel personally. As seen from Berlin, although the Trump years are over, the lesson remains that Europe will have to stand on its own feet, the senior German official said. It's on that basis that Merkel now will deal with Biden.

The G-7 is a reminder to Merkel of the need for joint action to deal with the world's most intractable problems, experts say.

At her first summit, in 2006 in St. Petersburg, leaders discussed Israel's conflict with Gaza, Iran's nuclear program and climate change, topics that could just as easily be on the agenda this weekend.

Biden will be her fourth U.S. president since then; in that time she has worked with two Canadian premiers, three Japanese prime ministers, four French presidents, five British leaders and 10 Italians. One constant throughout has been Putin. A Russian speaker, Merkel holds regular calls with the president to badger him on Ukraine, and Biden surely will tap her knowledge before his meeting with Putin in Geneva.

Certainly, there is enthusiasm over the summit in Cornwall. Germany, France and Italy all want to strengthen cooperation with Washington. For all the differences among G-7 leaders, the stars may be aligning for joint action, which is after all Europe's forte.

"They all want to leave their mark and actually get something done," said Nicolas.