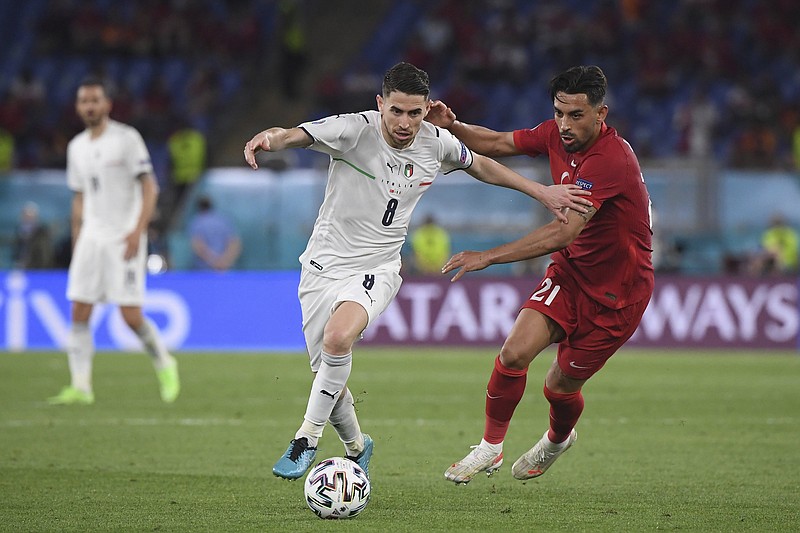 Italy’s Jorginho (left) fights for the ball with Turkey’s Irfan Kahveci during the European Championship soccer match between the two countries on Friday in Rome. Italy defeated Turkey 3-0 in the opening match of Euro 2020, which was postponed by a year because of the coronavirus pandemic. (AP/Alberto Lingria)

ROME -- Postponed by a year, the biggest sporting event since the coronavirus brought the world to a halt kicked off Friday at the Stadio Olimpico in Rome -- a milestone both for European and world sports.

The opening match of soccer's European Championship was played in the capital of Italy, the first country outside Asia to get struck by the pandemic and the first in the world to implement a nationwide lockdown.

The tournament represents a major step forward on the path toward recovery after one of the darkest chapters in the continent's history since World War II. More than 1 million Europeans have died in the pandemic, including almost 127,000 Italians.

"After everything that's happened, now the situation is improving, I think the time has come to start providing fans with something to be satisfied about," said Italy Coach Roberto Mancini, who tested positive for covid-19 in November but was asymptomatic.

Italy defeated Turkey 3-0 Friday, scoring all three goals in the second half.

The tournament was postponed last March when countries were scrambling to contain virus outbreaks and major sporting events around the world were canceled or put on hold.

Many worry that it's still not safe to bring tens of thousands of fans together in stadiums across Europe, but organizers hope measures including crowd limitations, staggered arrival times for fans, social distancing rules and lots of hand sanitizer will help prevent a resurgence of virus infections, which have dropped sharply in Europe in recent months.

In Rome, fans entering the stadium are required to bring documentation showing they have been vaccinated against the virus, tested negative in the 48 hours before the match or already had the disease.

The world of sports is watching. If everything goes smoothly, Euro 2020 can give a confidence boost for other major sporting events, like the Tokyo Olympics, scheduled to open on July 23 -- also a year late. If it doesn't, it would be a serious setback that could have ramifications beyond soccer.

"Let's hope for the best," said Alessandro Savelloni, a 36-year-old Roman having a beer with his wife at a street bar before the match. "We are coming out of a dark period. People need freedom. To return to normal life."

The virus already has had an impact on the tournament, which for the first time is not being hosted by one or two nations but is spread out across the continent with matches in 11 cities.

Spain captain Sergio Busquets tested positive for covid-19 and will miss the team's first match against Sweden in Seville on Monday.

Russia winger Andrey Mostovoy then became the first player to be cut from a national team on Friday after testing positive.

Italy's opening match brought together the biggest crowd in the country since it went into a full lockdown 15 months ago, even though the stadium was filled to only 25% of its capacity.

Tenor Andrea Bocelli, who recovered from covid-19 in 2020, delivered a powerful performance of Giacomo Puccini's "Nessun Dorma" at the opening ceremony. Bocelli touched the hearts of millions in Italy and beyond when he performed a solo concert at Milan's empty cathedral during Easter last year. Milan is the capital of the Lombardy region, at the time the epicenter of the pandemic in Europe.

In Rome and elsewhere in Italy, most virus restrictions have now been lifted. A midnight curfew and a requirement to wear a mask outside one's home are the most tangible ways in which the pandemic still affects the daily lives of citizens.

Shops, restaurants, gyms, museums and theatres have reopened. Roman traffic has returned to its usual chaotic state, with swarms of scooters competing for lane space with honking cars. The tourists are coming back, too, though the historic center with its famous landmarks remains less congested than what's normal for this time of year. 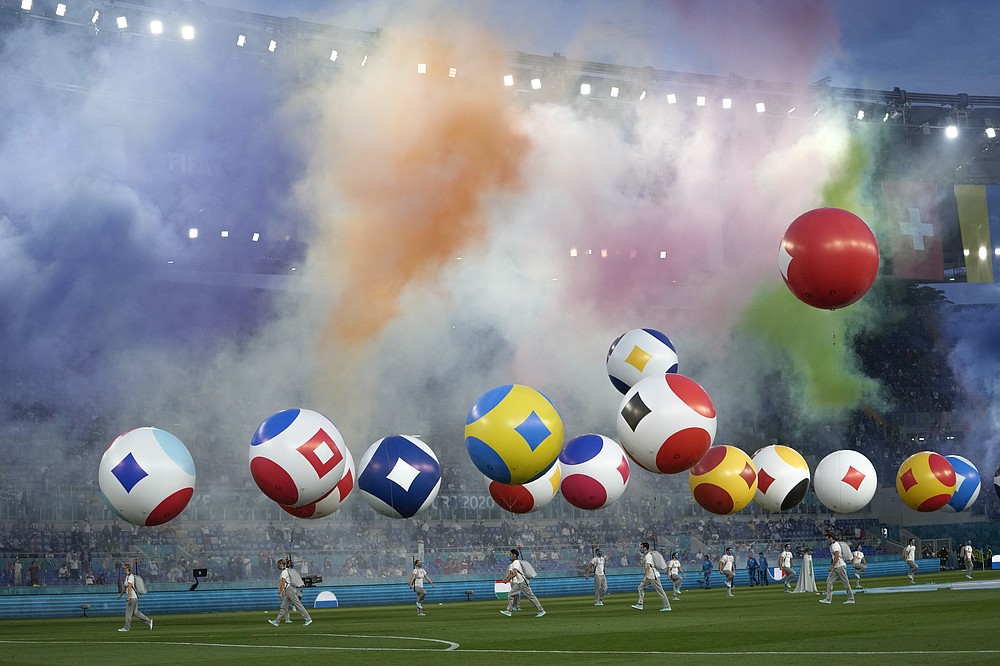 Artists perform prior to the Euro 2020, soccer championship group A match between Italy and Turkey, at the Rome Olympic stadium, Friday, June 11, 2021. (AP Photo/Alessandra Tarantino, Pool) 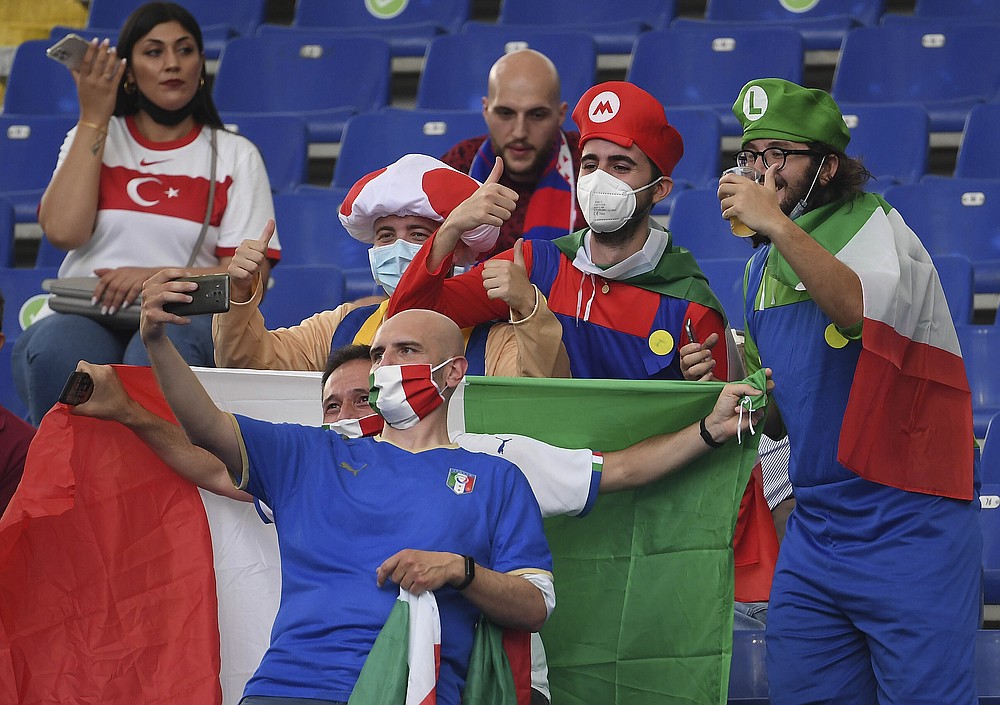 Fans take selfies with their phone before the Euro 2020 soccer championship group A match between Turkey and Italy at the Olympic stadium in Rome, Friday, June 11, 2021. (Ettore Ferrari/Pool via AP) 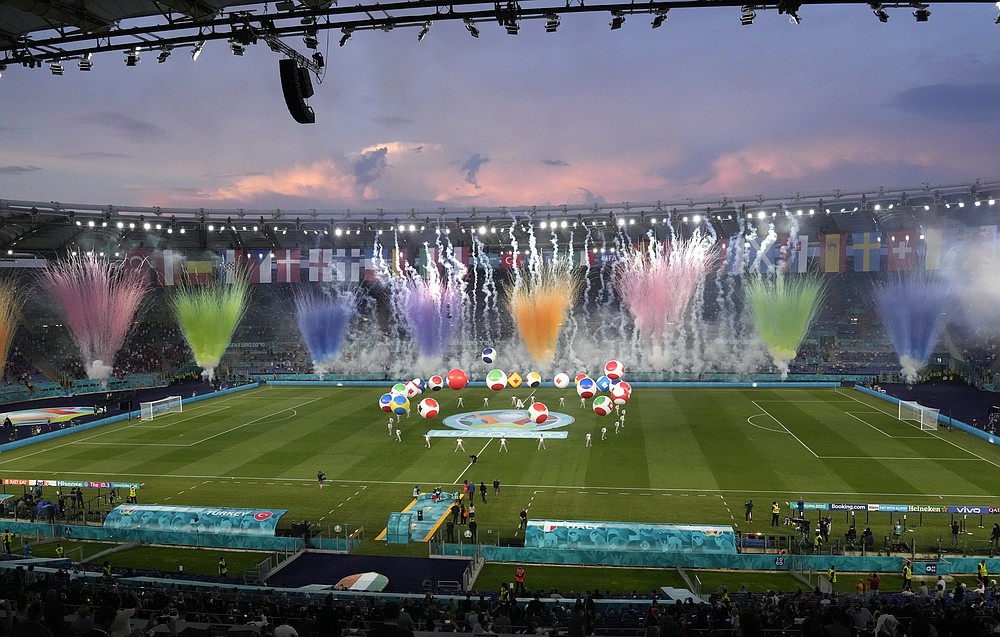 General view of the stadium during the opening ceremony prior to the Euro 2020 soccer championship group A match between Turkey and Italy at the Rome Olympic stadium, Friday, June 11, 2021. (AP Photo/Andrew Medichini, Pool) 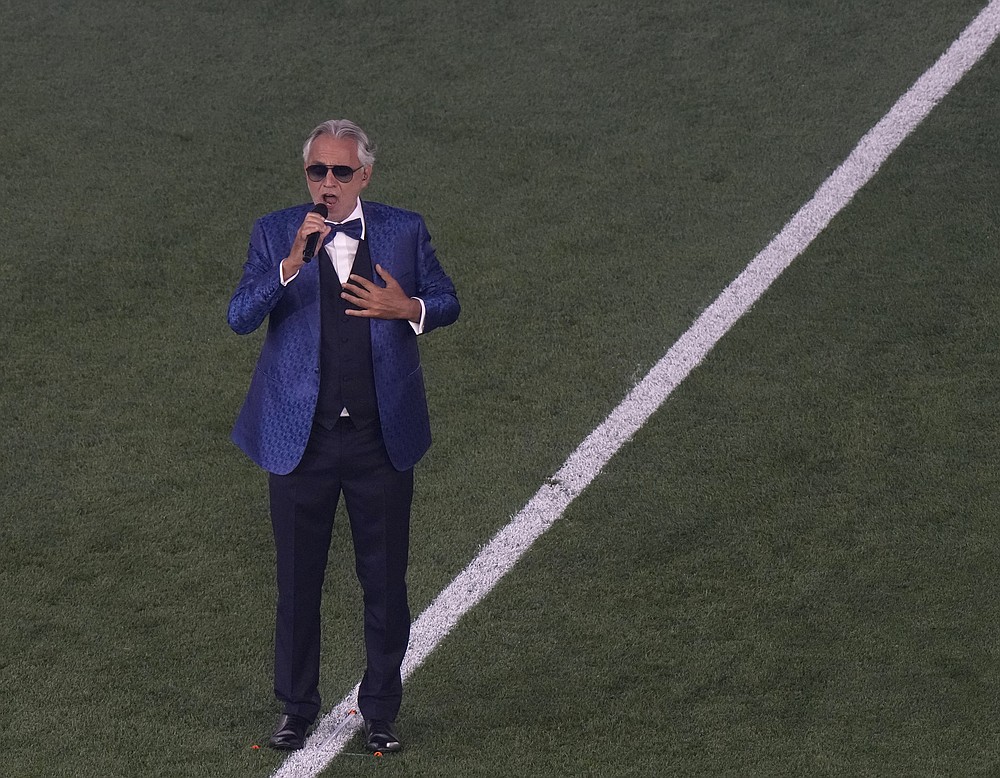 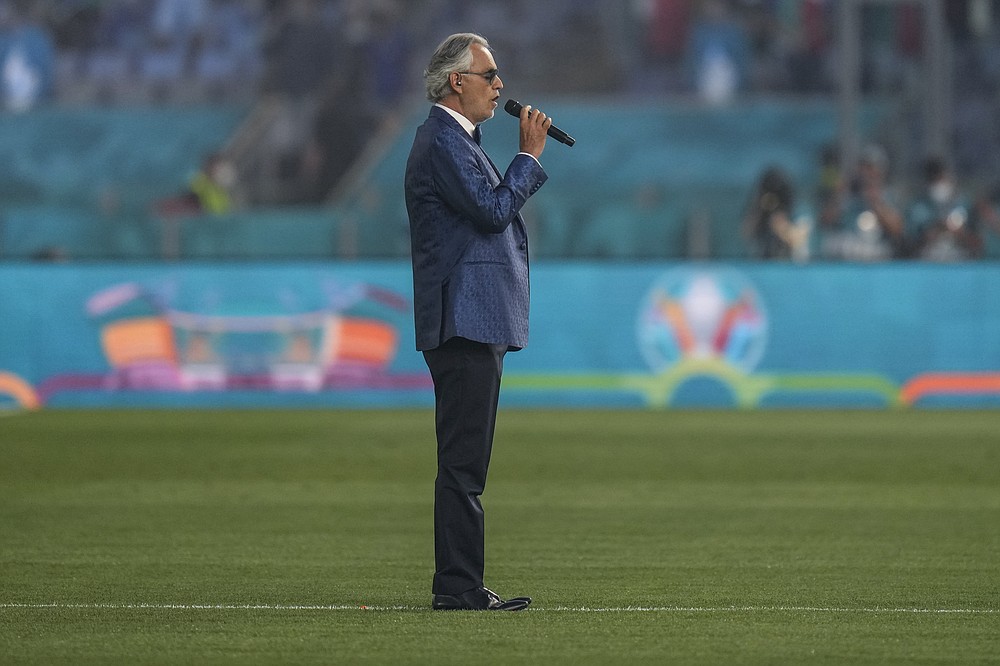