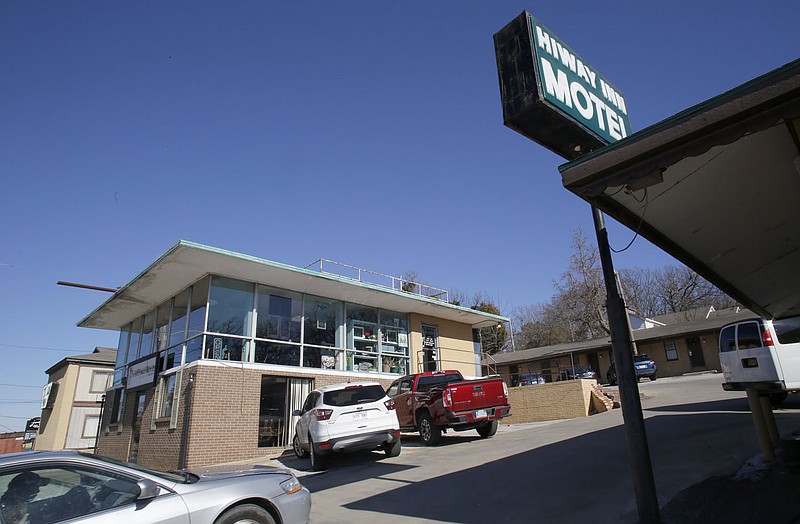 The Hi-Way Inn and Motel, located at 1140 N. College Ave., is seen Jan. 29, 2019, in Fayetteville. The development nonprofit for the Fayetteville Housing Authority on Thursday agreed to sell or relinquish ownership of five properties, including the motel which it had converted into apartments, to recoup debt. (File photo/NWA Democrat-Gazette/David Gottschalk)

FAYETTEVILLE -- The Housing Authority's nonprofit arm wants to cut its losses and sell or relinquish ownership of five properties it intended to buy and renovate for low-income residents.

The board for FHA Development, which is made up of Housing Authority board members, voted Thursday to make the move.

The plan for the properties was to use bank loans, grants and resident rent to make a profit. Purchases were in the process, but when covid-19 hit, bank financing fell through and many residents couldn't pay rent, Chairwoman Melissa Terry said during a Thursday board meeting.

The authority nonprofit had to come up with new plans, she said, and some properties were purchased and some were leased to own.

FHA Development now has about $164,000 in unpaid rent and costs for renovations and maintenance at the properties. The nonprofit also is carrying about $12,000 in interest per month on restructured loans and $18,700 per month to the Housing Authority itself for administration and support services, Terry said.

The goal is to make back the money invested in the projects that no longer have a path to solvency, board member Ezra Brashears said.

"We have made a magnificent try. We kept people housed during covid, and it cost us a lot. It cost us the ability to go forward comfortably," he said. "So, with the market as it is, let's sell, take the burden off the staff and cut our losses. We'll probably come out ahead a little bit."

The authority nonprofit was in line to buy five properties totaling 133 units at a cost of $7.3 million for purchase price and renovations, according to a document Terry presented to the board.

Four of the properties were offered to the authority nonprofit by the same owner, John Cloyed. A real estate contract for the properties was signed in December 2019 with a planned closing date of April 2020. In late March 2020, the bank that had agreed to finance the purchases told the authority nonprofit it couldn't complete the transaction because of the pandemic, according to the document Terry shared.

Two of those four properties didn't close and went under lease to the development nonprofit with an option to purchase. They were an apartment complex on West End Avenue north of Wedington Drive and one on Dunn Avenue between 11th and 13th streets. Those properties are scheduled to turn back over to the original owner Tuesday.

The authority nonprofit recruited new banks and received financing for the other two properties. The deal for a complex at 12th Street and South Washington Avenue closed April 22 last year for $865,000. The bank financed 75% and the seller agreed to a second mortgage for the remainder of the purchase price and closing costs, according to the document. The debt is still outstanding.

The deal for another complex south of Deane Street and Porter Road closed June 15 last year for just more than $1.3 million. The bank financed 85% of the purchase price and the seller agreed to a second mortgage of $200,000 to be repaid in October this year, according to the document.

The first property FHA Development bought was the former Hi-Way Inn & Motel across from the veterans hospital on North College Avenue in 2019. The property also includes Cafe Rue Orleans restaurant. The authority nonprofit closed on the property purchase in April 2019 for $690,000.

Cafe Rue Orleans continued to operate as a restaurant, and the motel was converted into apartments. Residents who live in public housing at the authority-owned Hillcrest Towers downtown moved to the motel while renovations took place at the towers. The plan was to eventually have veterans live at the renovated motel. Renovations finished at Hillcrest, and those residents have since moved back. Board members discussed other plans to house veterans during Thursday's meeting.

The board agreed to allow the West End and Dunn avenue apartments revert back to the previous owner. It also agreed to put the 12th and Deane street properties on the market, along with the motel and restaurant property.

Board member Kristen Bensinger, who is chairwoman of the Housing Authority's regular board, resigned at the beginning of Thursday's nonprofit board meeting. She read a letter to the board outlining her concerns over the authority nonprofit's finances and a lack of transparent communication.

Bensinger said during the meeting that the document Terry shared with the board outlining the financial situation with the properties was the first time members had gotten a clear explanation in a public setting. The authority's development nonprofit board now has three members with Terry, Brashears and Monique Jones. Former member Lucky McMahon resigned from both boards last month for personal reasons.

The Fayetteville Housing Authority’s development nonprofit planned to buy and renovate the following properties but decided Thursday to sell or relinquish ownership. Properties denoted with * did not close and instead were leased with an option to purchase.