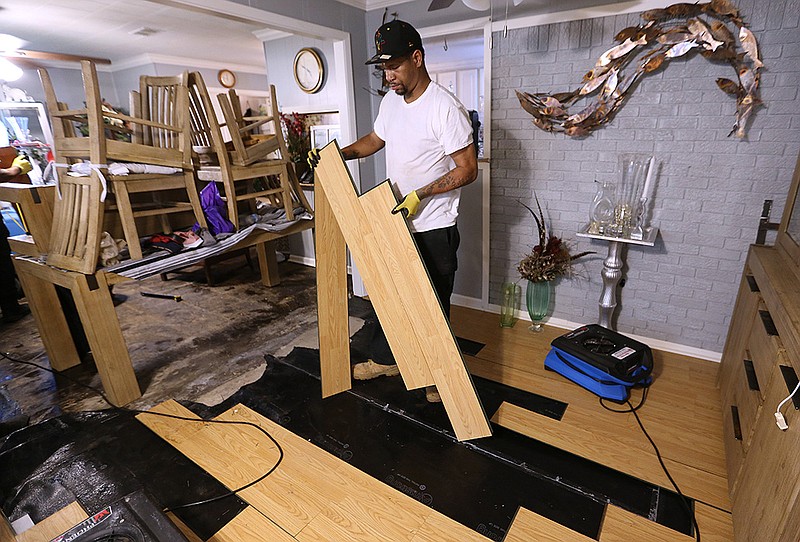 DUMAS -- Evelyn Murphy, 74, spent her retirement money renovating her house earlier this year, but on Friday, she watched workers pull up her new floors as fans aired out her home.

Unprecedented flooding throughout Desha County wiped out the renovations in a matter of two days.

Colorful area rugs hung from the porch railings outside her house and her sister's next door where she has been staying since Tuesday.

"I'm just thankful that I could stay with my sister and didn't have to pay a hotel," Murphy said.

Murphy's is one of about 100 homes and 20 businesses in Dumas that experienced water damage after flash floods inundated southeast Arkansas on Tuesday and Thursday, Mayor Flora Simon said Friday.

[Video not showing up above? Click here to watch » https://www.youtube.com/watch?v=oKwUW2MRmE0]

The region received a record 20 inches of rain in 48 hours. It was more than Desha County's drainage system could handle.

Dumas' streets were clear by Friday, but water remained in many Desha County fields. Officials worried more rain in the next few days could impede efforts to drain the water.

The National Weather Service is forecasting a "slight chance" of showers and thunderstorms in southeast Arkansas this weekend, with a 20% chance this morning, 50% this afternoon, 30% overnight and 20% on Sunday.

Water flows into Desha County from as far northeast as between Pine Bluff and Grady, and continues until it reaches the Mississippi River, the county's eastern border.

Canal 19, just southeast of Dumas, usually captures the excess rainwater, but the canal overflowed this week, leaving miles of roads and fields under water for hours at a time. The floods destroyed thousands of acres of crops, dealing a financial hit to farmers who were looking forward to a promising year of yields.

"There's not a whole lot of crop damage north [of the county], but when you get close to Dumas, you just see water inundating the fields, and it's a gut-wrenching sight for me to see that," Hutchinson said at a news conference at the Dumas Community Center after the tour, alongside state Emergency Management Director AJ Gary and Agriculture Secretary Wes Ward.

The Division of Emergency Management will use $100,000 from the Emergency Response Fund of the Governor's Disaster Fund to help the community recover. Desha County residents told the state officials Friday that they hope to receive federal aid, but the Federal Emergency Management Agency only assists communities that meet a financial threshold that varies by county. State and local officials worry that threshold won't be met.

Hutchinson and Ward urged farmers to assess and report damage to farm service agencies so that Hutchinson can send a letter to the U.S. Department of Agriculture advocating for federal aid. Representatives from the offices of U.S. Sen. John Boozman, R-Ark., and U.S. Rep. Rick Crawford, R-Ark., were present at the conference.

County Judge Robert Akin from neighboring Drew County compared the flooding to other devastating natural disasters in recent decades across the U.S., and said the federal government should provide relief.

"It was nobody's fault," Akin said. "I know that there were people blaming people, 'Oh, you didn't clean out ditches,' [but] the Suez Canal would not have handled the water that fell out of the sky Tuesday night."

The American Red Cross set up a flooding-assistance hotline at (417) 447-7180 that is active 10 a.m. to 6 p.m. every day until Thursday. The organization also opened a shelter at Marzell Missionary Baptist Church in Gould earlier this week. The shelter will close today, according to a news release.

It took five people and two days to push floodwaters from the building David Byrd owns on U.S. 65 South.

Byrd is Dumas' fire chief and owns Byrd Enterprises, one of the three businesses in the building. He learned Thursday that his insurance policy would not cover the damage from the flood.

"My [agent] said this is considered groundwater, and that's the reason insurance companies will not cover it," Byrd said.

Lydia Davis owns Big Boy's BBQ next door and said it would cost her $10,000 to replace the flooring after 4 inches of water seeped into the building. She hopes she can secure grant funding for the project.

"I'm just afraid to let those floors stay because I don't know what the future holds, since that much water came in," Davis said.

The Emergency Management Division sent a sandbagging machine to Dumas on Thursday to aid efforts to barricade the floodwaters, according to a tweet from the department, but much of the water flowed in before the city had any sandbags.

Dumas resident Onie Norman said at the news conference that while the city has done its best to mitigate the damage, it needs to have a plan in place for future flooding of similar proportions, especially with the drainage system overflowing.

"[In terms of] a rescue plan, sometimes the citizens have little knowledge of what the rescue plan is," she said. "This time, some citizens had gotten trapped in the waters, and most of the time they didn't know who to call to get out."

Simon, the mayor, said in an interview that the city will work on a rescue plan, even though flash flooding of such proportions is rare in Dumas and the fire and police departments are always ready to respond to emergencies.

"Things like this don't happen often in this area," she said. "You can do a plan now and it may be 20 years before you have to use it."

A few blocks from Murphy's house in western Dumas, the carpets and baseboards in Virginia Powell's sunroom were under water on Thursday, and the pressure of the water on the roof damaged the ceiling, she said. Repairs will be expensive since she wasn't able to secure flood insurance, she said.

"I've been over here 50 years and I've never had any problems," she said. "The street flooded, but it would never come up into the houses."

The houses would have undergone less flooding if people had refrained from driving down residential streets and pushing water into the buildings, Simon said. The city's 13-person street department barricaded several streets but did not have the resources or the manpower to block them all, she said.

"Everybody in town wanted their street blocked, and I kept saying we can't," she said. "Those streets that we blocked, people were moving the barricades out of the way and still going through the water."

The United Methodist Committee on Relief sought to help residents by giving away buckets of cleaning supplies, including garbage bags, insect repellent, household cleaner and scouring pads, at First United Methodist Church on Friday afternoon. Linda Weatherford, a church member who helped coordinate the supply drive, said 120 buckets were available Friday and 400 more would be today.

The visit from state officials proved they understand that the region needs help, Simon said, but she does not expect the state's financial support to meet the needs of the people most affected by the flooding.

"I think we are going to receive some support, but how substantial that's going to be? I'm not sure about that," Simon said. "That's based on past experience. I've been in this area forever. I think most of our support is going to come from agencies that are already beginning to come in, and that's what our citizens probably need to start preparing to receive and let them assist them to the maximum."

Besides homes, farms and other businesses, infrastructure took a hit from this week's floods, said Richard Tindall, Desha County 's county judge. The county repaved many of its roads earlier this year, but most of those roads have been under water for at least two days. The ones that were visible again were ruined, he said.

"Our budget for roads is shot, but hopefully we can get some help in that area," he said.

Meanwhile, more canals were threatening to overflow throughout the county Friday afternoon.

"Right now we're fighting to keep those canals in their banks," Tindall said. "We're using gravel for our roads to build dams."

The county's drainage system can handle 4 or 5 inches of rain in 24 hours, but the county received twice that much for two days in a row, said Jason Smith, the inspector for the Cypress Creek Drainage District in western Desha County.

"When something like this comes along, I won't say it devastates the system, but there's lots of repair work to be done when this type of event is over," he said.

Smith also is a farmer, with land between Dumas and Watson, and he said the rain submerged about 85% of his 4,000 acres of rice, soybeans and wheat.

About 3,800 of Steve Ross' 5,000 acres were under water Friday morning, he said at the news conference. His land stretches 31 miles from Gould to Rowher, and "the best crop starter we've had in 41 years" disappeared in the flood, he said.

"We know we can't make a full crop, but we could tear everything down and replant it," Ross said. "It's been a real dilemma deciding what to do, because once there's a late crop, that throws us late into harvest this fall, and next spring we'd start late again."

The Arkansas Farm Bureau estimated that statewide flooding could cost Arkansas' agriculture industry as much as $310 million.

Rep. Mark McElroy, R-Tillar, has now "been on both sides" of the impact of flooding in the region, he said at the news conference. He handled the aftermath of Desha County flooding in his two decades as county judge, and his house flooded earlier this week.

"Until you've been through this, when you see that water slowly creeping up your walls, your wife's crying and there's nothing you can do, baby pictures are on the floor -- it takes a human toll," McElroy said. 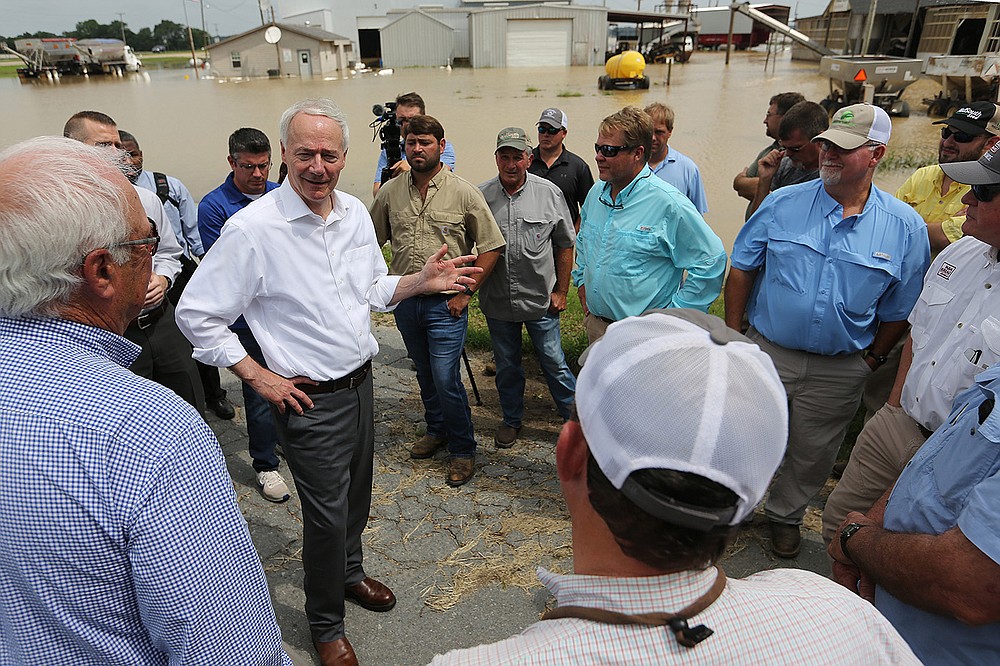 Gov. Asa Hutchinson talks with farmers Friday at the WinCott Gin Co. in Tillar after listening to their stories about crop damage during his tour of flooding in southeast Arkansas. (Arkansas Democrat-Gazette/Thomas Metthe) 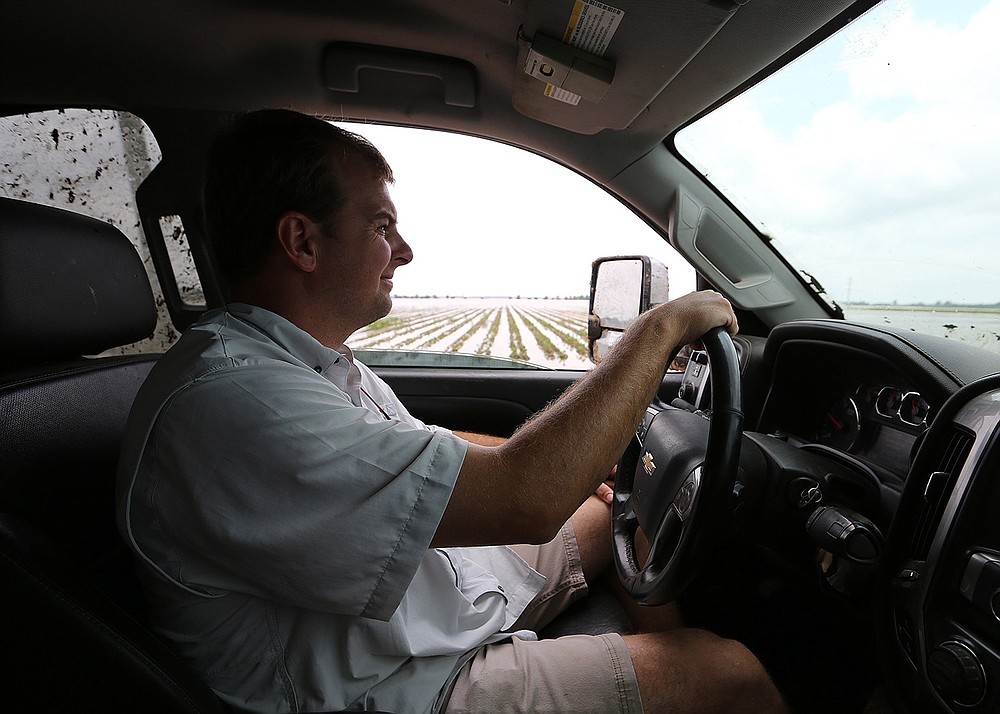 John Ross surveys flooded soybean fields on the land his family farms in Desha County. Ross said his family farm’s 5,000 acres has been affected by flooding from this week’s rains. “I went to bed on Monday and we had a good rain for the fields and the Hogs won. I thought it was a good night, but then the rain never stopped,” said Ross. (Arkansas Democrat-Gazette/Thomas Metthe)
ADVERTISEMENT