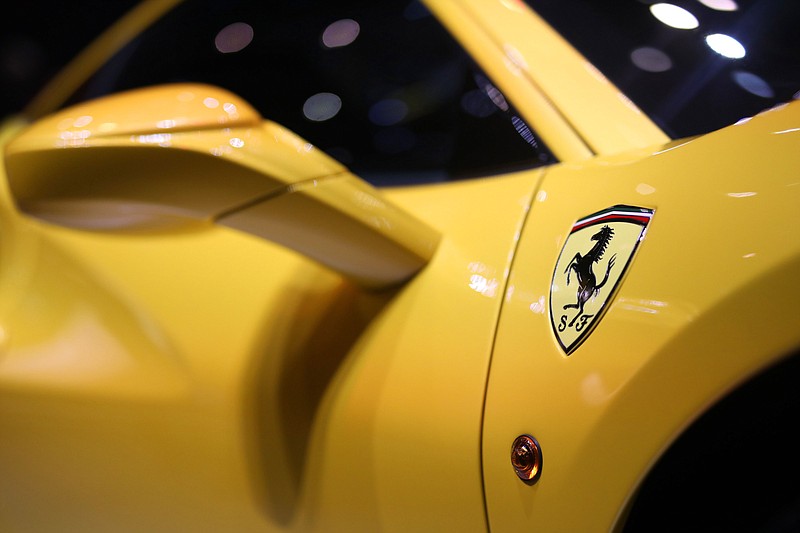 The Ferrari prancing horse logo on the bodywork of a Ferrari luxury automobile at the 87th Geneva International Motor Show in Geneva, Switzerland, on March 7, 2017. MUST CREDIT: Bloomberg photo by Chris Ratcliffe.

The man who helped the iPhone sense when it's been tilted sideways is taking over as CEO of Ferrari, highlighting the growing dominance of technology in the auto industry that's witnessing its most profound transformation in more than a century.

The iconic Italian supercar maker announced last week that it recruited Benedetto Vigna, 52, from chipmaker STMicroelectronics to become chief executive officer starting Sept. 1. The appointment is a watershed moment for incumbent carmakers that have rarely looked outside the sector and haven't named tech leaders to their top job.

"Appointing someone relatively young and from the technology field sets the tone for where Ferrari is headed," said Tom Narayan, an RBC Capital Markets analyst. "The biggest issues this company will face in our view over the next decade will be adapting to the changing auto technology landscape as a luxury brand."

The top job at Ferrari was one of the more enviable positions in the auto business before stricter emissions limits and demand for higher-tech gadgetry began to upend the industry.

While the CEO job is still an attractive position -- the company has been relatively insulated from these pressures because of its ultra-luxury sheen and heritage -- Ferrari's slow embrace of electric cars has started to weigh on its rich valuation recently. That puts pressure on Vigna to strike a balance between engineering purists hooked on roaring combustion engines and a younger clientele demanding the Italian carmaker embrace a battery-powered future in the same way that Porsche or Lamborghini have done.

Ferrari shares have slipped about 5% this year, underperforming the likes of Volkswagen and Daimler, which have capitalized on rising enthusiasm about EVs.

"The appointment is highly unexpected and, in our view, reflects the need to 'reinvent' Ferrari and the difficulty of securing candidates willing to take on the task," Jefferies analyst Philippe Houchois said in a note.

At STMicro, Vigna helped pioneer screen-sensor technology in the iPhone 4 that's now used widely in smartphones and vehicle navigation systems globally. He'll go from running STMicro's analog sensor group -- its most profitable unit -- to replacing John Elkann, the Ferrari chairman who's been filling in as interim CEO since December.

Around the time Ferrari debuted its first plug-in hybrid in 2019, then-CEO Louis Camilleri said that many customers had trouble imagining a battery-powered car as a true Ferrari. Elkann only recently outlined plans for a fully electric model for 2025, years after Porsche debuted its Taycan model.

Choosing an executive with a strong background in sensors and software signals Ferrari is set to shift faster toward the tech industry, after previously measuring itself up against luxury-goods makers such as Hermes International or conglomerate LVMH. The appointment of an executive from a chipmaker also comes as automakers struggle with a severe shortage of semiconductors.

Vigna's "deep understanding of the technologies driving much of the change in our industry, and his proven innovation, business-building and leadership skills, will further strengthen Ferrari and its unique story of passion and performance, in the exciting era ahead," Elkann said in a statement.

It's not the first time that Elkann, who leads the family empire of the Agnelli clan, has tapped a relative outsider for a challenging task in the automotive sector. Longtime Fiat and Ferrari leader Sergio Marchionne joined in 2004 from SGS SA, a Geneva-based product-testing company, successfully transforming Fiat and eventually combining it with Chrysler. Camilleri was also an outsider -- though he already sat on the Ferrari board -- having previously worked for cigarette maker Philip Morris.

The three-dimensional motion sensors Vigna pioneered at STMicro played a critical role in innovating both mobile phones and video-game consoles like the Nintendo Wii.

"Benedetto combined strong managerial and technical skills with an incredible human warmth that allows him to be a true leader," Pasquale Pistorio, a former STMicro chairman who mentored Vigna, said in a phone interview.

Weaning customers off high-powered combustion engines will be a complicated feat, though Porsche's experience with the Taycan shows it can be done. After going on sale in 2019, deliveries have surged to almost level with the iconic 911. The model is attracting a significant number of buyers new to the brand.

Italian rival Lamborghini announced last month that by 2024, it will offer plug-in hybrid versions of each model in its lineup -- from the best-selling Urus SUV to the track-suited Aventador.

Ferrari will share details about its future during a capital markets day in 2022, a year of important new product launches, Elkann said earlier this year. The Purosangue -- the brand's first-ever SUV -- is "turning out to be something truly special," the chairman of holding company Exor NV has said.

In May, the automaker delayed long-standing earnings targets as it adjusts spending in response to the pandemic. Ferrari had aimed for 2022 profit of at least $2.2 billion before interest, taxes, depreciation and amortization and now plans to achieve this and other goals a year later.