Bradley County Pink Tomato Festival nearly back to normal in 2021 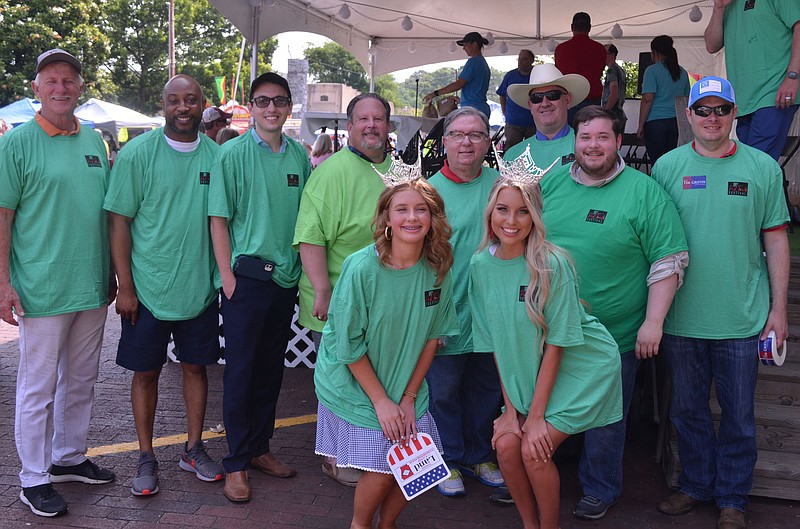 V.I.P. tomato eating contestants line up to take the challenge. (Special to The Commercial/Richard Ledbetter)

With the onset of hot, humid summer weather, the south Arkansas tomato crop is once more approaching fruition, hearkening another in the long line of Bradley County Pink Tomato Festivals hosted by the city of Warren.

"The Pink Tomato Festival is the longest consecutively running event of its kind in Arkansas," said Ashley Foreman, Bradley County Chamber of Commerce executive director. "It is traditionally held the second week of June. Counting our down-sized version in 2020, this is our 65th year, making us the oldest festival in Arkansas. We were just named recipient of the Arkansas Food Hall of Fame Best Food Related Festival award for 2021."

Since they weren't able to do much last year, the festival committee continued to meet and plan for 2021.

"When the green light came down from the governor's office, we were full-speed ahead. Even with the adjustments we made for 2021, everyone agreed it is just so great to be back!" Foreman said.

"We were unable to hold the annual tomato luncheon because there just wasn't enough time to make all the preparations to bring that about this year," Foreman said.

The arts and crafts show opened Friday at 9 a.m. and ran through Saturday.

"Unfortunately," she said, "Johnson Brothers carnival had a couple of their people test positive recently, so the CDC recommended they quarantine. Out of an abundance of caution we canceled the carnival but were able to procure a gyro-sphere, several bounce houses, obstacle course and rock climbing wall for the children to enjoy."

The Vision Coalition, a group of 25- to 35-year-old business people and entrepreneurs around Warren, sponsored a Sidewalk Chalk Art Contest on Cypress Street as another activity for the kids, with prizes awarded to the winners, Foreman said.

"The biggest question we kept hearing before the event was, 'Will the tomatoes be ready?' I told them, 'Because of this spring's cool, wet weather, the full crop won't come off until next week.' Even so, we still had plenty of produce available for purchase," she said.

Two other categories of competition included children's and professional. The pros have a three-minute window to consume the most tomatoes whereas the other two competitions are allowed only two minutes. The professional competition was won with a total of 3.625 pounds of ripe fruit consumed by 2019 Kids category winner Gage Weaver.

John Wheeler has chaired the tomato eating contest for 35 years.

"I'm really glad we are able to have the fest back, even though we were late getting started due to restrictions," Wheeler said. "Our committee gets together on Thursday evening before kick-off and weighs out 200 pounds of tomatoes into four to five pound bags for the contestants. This is only the second time in my tenure that we have had to go outside Bradley County to have enough produce to meet that need."

While enjoying the festivities, local businessman Thomas Frazier said, "This is refreshing from the town's standpoint to see folks throwing candy in the parade and kids jumping in the street to pick it up. The politicians are back and it seems like Main Street is alive again. It's good to see folks come back to the country."

Foreman said, "The volunteers who bring their talents into play to make our festival happen all have 9 to 5 jobs, but each one still manages to take on a little piece of the task, stepping up to get it done every year."

In a departure from previous fests, Foreman said, "With the short time to organize and a lot of the nationally known bands still not touring, we decided against hiring big name entertainers and sticking with local talent."

The musical line-up for 2021 consisted of a popular Southeast-Arkansas band, Carolina Cotton, performing on the outdoor stage at 3 p.m. Saturday followed by local South Arkansas Talent Search winner Gwendolyn White at 4:30 p.m. The Cutest Baby Contest was held at 5 p.m. followed by the Grace Cowboy Church Gospel group from 7-8:30 p.m. Festivities wrapped up at 9 p.m. with a Grand Finale Fireworks Show. 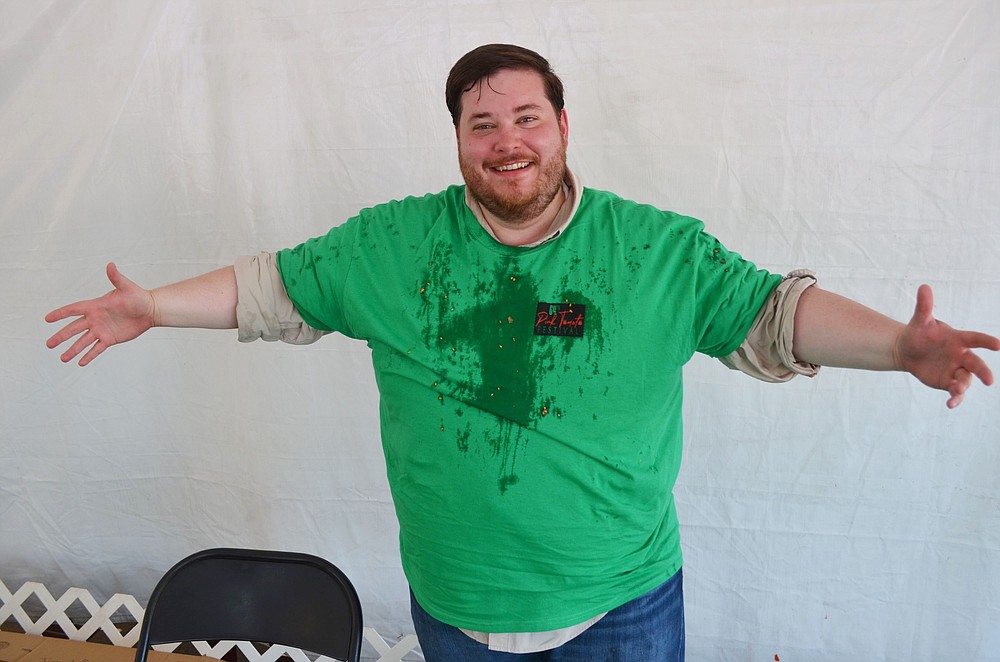 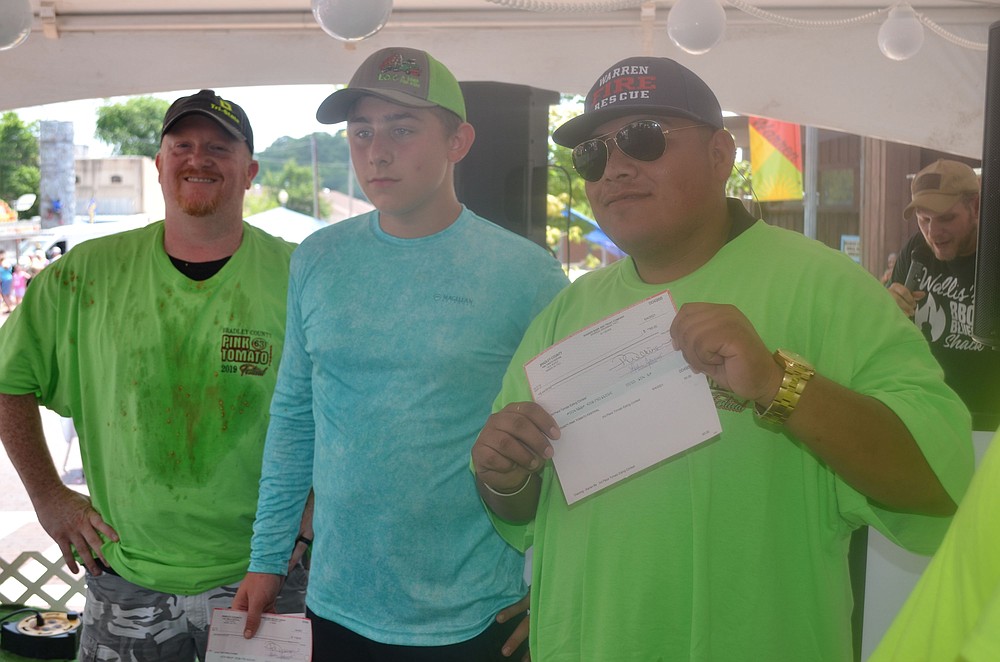 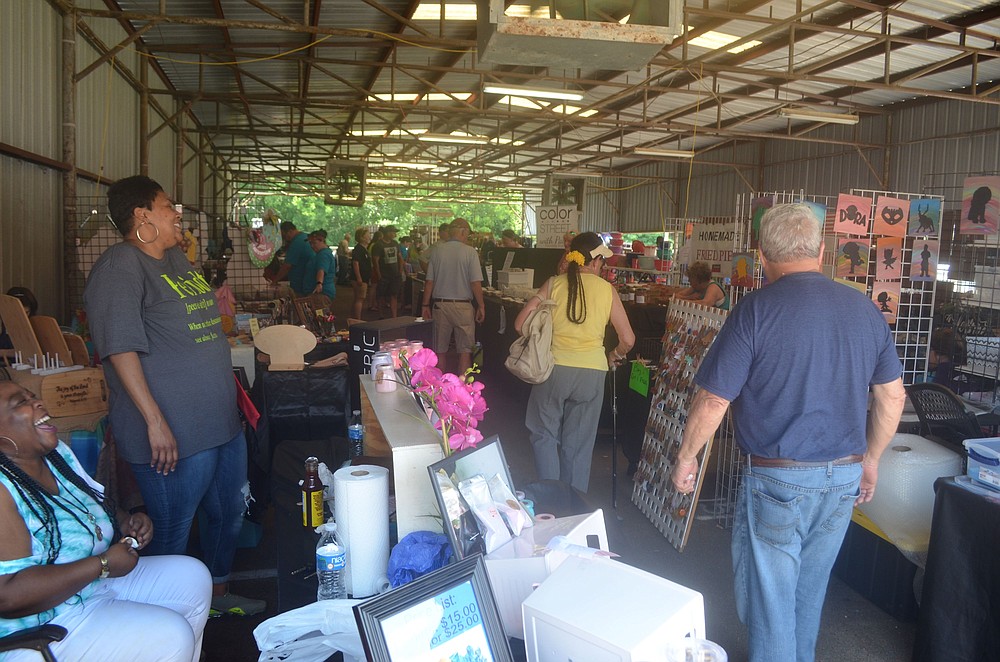 Arts and crafts are always a favorite attraction of the 65-year-old Pink Tomato Festival. (Special to The Commercial/Richard Ledbetter)
ADVERTISEMENT