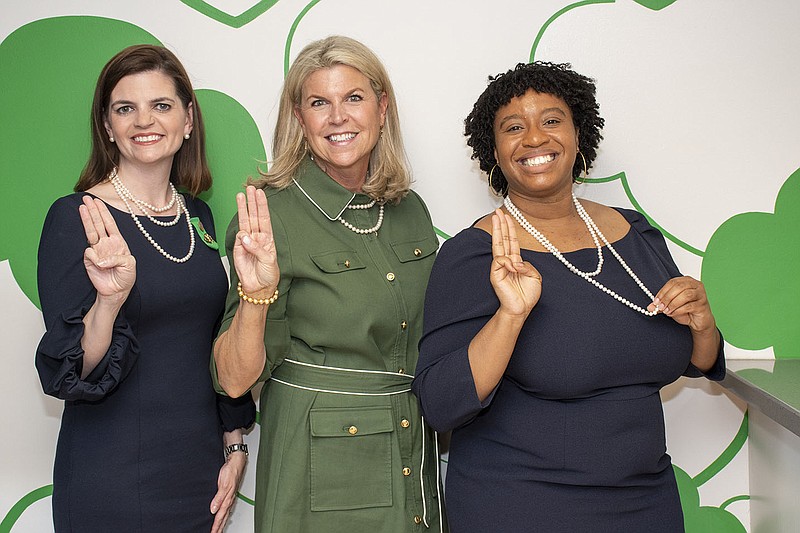 Juliette Gordon Low, who founded the Girl Scouts in 1912, was so committed to making sure the new organization for girls was a success that she sold a valuable strand of her own wedding pearls to help with funding.

A group of women in the local Girl Scout council area -- Girl Scout Diamonds of Arkansas, Oklahoma and Texas -- also are committed to the Girl Scouts. They understand the benefits and importance of being in the Girls Scouts for young girls and have made a financial commitment to the council. They are members of Juliette's Circle.

Dana Kleine, a Roden+Fields consultant and an owner of Corky's Ribs and BBQ, was one of the first women to join the giving circle. Her mother was a Brownie and Girl Scout leader and she recalls, "It is my first memory of being a part of a group."

Juliette's Circle member Kara Wilkins, principal consultant for KWilkins Consulting Group and former Girl Scout says, "I received the Gold Star Award and went to college on a Girl Scout scholarship. So it has really made a big impact in my life." She noted she also appreciates how Girl Scouts has shifted with the times, with STEAM programs and "other things that younger girls may be looking for, in terms of helping them to build their self esteem and in their progress in other ways."

Wilkins decided to join the circle because Girl Scouts had such a fundamental impact on her. It was a way for her to still lean in, still stay involved and be invested outside of the traditional buying a box of cookies.

Arkansas Highway Commissioner Maria Holder, also a former Girl Scout, received a Juliette's Circle membership as a Christmas gift from her husband and children. Where she grew up in Mississippi, Holder says, joining Girl Scouts was one of the few things available for girls to do.

"I just loved it -- the sense of responsibility and community service." She explains this was in the early '80s so there was a sense of empowerment for girls and women and that responsibility "stays with you for the rest of your life."

"When I had girls it was just a given that they would be involved in Girl Scouts And fortunately, we have more resources for the girls and children than we had growing up," Holder says. "But Girl Scouts is all the more important because of that. It's something that's universal."

She says that while the Girl Scouts still have the core program of community service, first aid, cooking and sewing, the programs have been enhanced and enriched. "Now they also have Internet safety and eating healthy and they've taken the core program and expanded it to meet today's girls where they are and in what they're interested in."

"When I support Girl Scouts, it's because of the influence they've had on my own girls' lives," Holder says of being a Circle member. "I think about all the individual troop leaders and cookie moms and cookie dads and members of the service unit and the staff. To be able to give back a small amount for what they have done for our family -- there's no question that I want to be part of that."

"A lot of people might not realize that Girl Scouts is a nonprofit because we have the cookies," says Council President and Chief Executive Officer Dawn Prasifka. "But in order for us to provide the programs and to provide the membership assistance and the scholarship to deserving seniors -- we can't do that without donor contributions."

Members of Juliette's Circle make the commitment to donate $1,000 a year for three years.

"Too many times adults perceive that the way to support Girls Scouts is by becoming a troop leader. But we realize that's not for everyone. Not everyone has the space in their day for that. So this is also a powerful way that they can support our mission," says Vanessa Russell, fund development manager for the council who helped create the Circle.

Prasifka says wherever she goes and people find out she works for the Girls Scouts she hears, "I was a Girl Scout" and "I loved being a Girl Scout." They would tell her about their great experiences and how their core had been shaped by the program, she says.

"That's what Vanessa [Russell] wanted to bring to life with this, is a remembrance and a connection," Prasifka says about bringing supporters into the Circle. "Other councils have other types of giving circles. But we wanted one that was really unique, that really spoke to the women here and that brought back the roots of what brought them to Girl Scouts."

It's a chance for the women to look back and to draw a line from where they came from and make the connection of how Girl Scouts shaped and informed them as adults, she says.

Another connection that the members of the Juliette's Circle will have is a strand of pearls. Russell says that she went to Jones and Son Fine Jewelry with the idea and they have helped to underwrite the program.

"There's a lot of symbolism around the pearls," says Russell, because Low sold hers to fund her dream of the Girl Scouts. Each of the 100 founding members of the Circle will receive a strand of pearls.

"I thought women who like pearls probably already have pearls -- but they don't have 60-inch pearls, which we think are really special," Russell says.

Those interested in helping to fund programs and activities of the Girl Scout Diamonds of Arkansas, Oklahoma and Texas or join Juliette's Circle can email Russell for more information at vrussell@girlscoutsdiamonds.org.