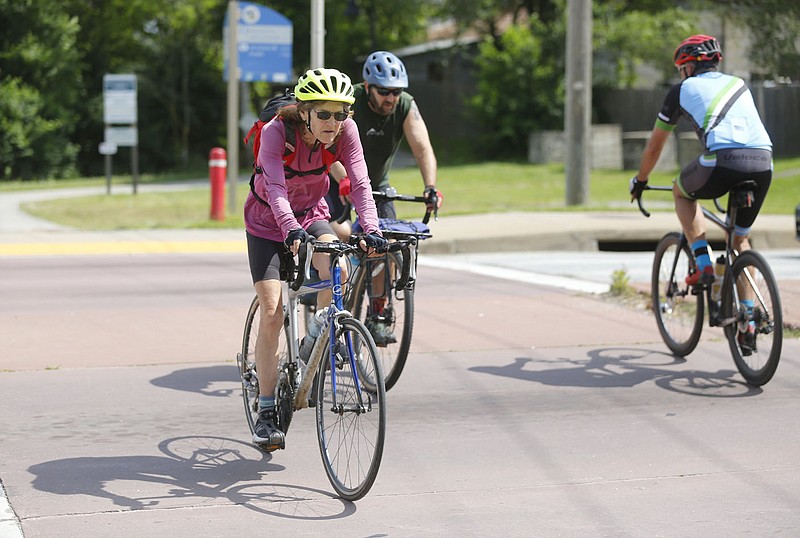 Karen Mowry (left), crosses Friday, June 11, 2021, W. North Street with other cyclist after the light change in Fayetteville. Cyclists and pedestrians are at an obvious disadvantage versus cars so engineers and planners are designing streets that make things safer by decreasing the chances of them coming into direct contact. Check out nwadg.com/photos for a photo gallery. (NWA Democrat-Gazette/David Gottschalk)

The region’s explosive growth in cycling combined with the increasing number of cars as the population climbs means more incidents of cars hitting bikes, sometimes with tragic results.

Engineers and planners are designing streets to reduce the chances of cyclists and pedestrians coming into contact with cars. The initiative is called complete streets.

“It’s real important to think about all the users,” said Matt Crafton, president of Crafton Tull Engineering. “Complete streets is just a term f0r incorporating people who are walking, people in wheelchairs, people on bikes as well as cars into that street.”

Crafton spoke on a panel last month at the Safe Roads Summit, hosted by the Arkansas Good Roads Foundation at Thaden Fieldhouse in Bentonville. The summit focused on cycling safety and integrating cycling into everyday travel.

“We’re working to create a world-class network of recreation and active transportation infrastructure,” said Paxton Roberts, executive director of Bike NWA. “The most important thing is that we create safe ways for people to leave the front door of their house or their school or their work and get to where they want to go.”

Roberts, at the Cycling Summit, said safer infrastructure will lead to more people choosing to commute by bike.

“If we don’t have safe places to ride, we will never see those numbers,” Roberts said. “We can encourage people all day long, but we have to have a place to ride. We have to make it easy and convenient to ride your bicycle to work or ride your bike to school.”

Joe Allbright, senior director for corporate real estate at Walmart, talked at the summit about how the retailer’s new campus in Bentonville is being designed with walking, biking and the outdoors in mind.

Walmart is hoping up to 10% of its workforce will use alternate transportation every day, Allbright said. The company plans to provide showers and covered bike parking to encourage the thousands of employees who live within 5 miles of campus to ride to work. The Northwest Arkansas Razorback Greenway will pass through the campus, and it’ll be about a seven-minute trip downtown by bike.

The Northwest Arkansas Regional Planning Commission earlier this year completed the 2045 Metropolitan Transportation Plan, which provides a long-range, comprehensive look at the region’s transportation needs and implementation strategies including highways, transit, and bicycle and pedestrian facilities.

Complete streets make it easy to cross the street, walk or bike to shops, jobs and schools, according to the National Complete Streets Coalition, a program of Smart Growth America, which is a nonprofit, nonpartisan alliance of public interest organizations and transportation professionals.

The coalition launched the complete streets initiative in 2004.

Creating complete streets means transportation agencies must change their approach to community roads, according to the coalition. Communities direct their transportation planners and engineers to design and operate the entire right of way to prioritize safer, slower speeds for all who use the road, rather than high speeds for motor vehicles.

Each city in the region with a population of more than 1,000 has its own bike and pedestrian plan. The 2045 plan also envisions walkable communities.

“I would say, over the last five years, we have seen many of the cities adopt master street plans that incorporate sidewalks and trails on one side of a major arterial-type road and implement trail connections,” Conklin said.

“We’re up to 30 communities that have now adopted their own community plans and have endorsed the regional plan,” Conklin said.

The Arkansas 112 corridor project is one example of how the region is working to make a major road safer for cyclists and pedestrians. Proposed improvements would make the road a limited access, four-lane, divided highway with raised medians, roundabouts and a 10-foot, multiuse sidewalk.

“We’re working on the Highway 112 corridor, which has federal Highway Administration proven safety countermeasures to reduce fatalities and serious injuries for those using the roadway driving,” Conklin said. “But, it will also potentially create an 18-mile, off-street side path.”

Many cities are also implementing those safety countermeasures — such as Fayetteville with Rupple Road and Springdale with Gene George Boulevard — to create a safe, comfortable, low-stress bicycle and pedestrian network not just within their cities, but also connecting to the regional network, Conklin said.

“I think, as a region, we all recognize that we need to create our roadway networks and our bicycle and our pedestrian networks in a manner that reduces fatalities and serious injures,” Conklin said.

Here is a link to Northwest Arkansas’ current bike-ped plan, which is part of the region’s the 2045 Metropolitan Transportation Plan: nwaonline.com/613safety/.

PeopleForBikes named Benton-ville and Fayetteville last week as two of the best biking cities in the world in its annual ratings. The ratings analysis evaluated more than 750 cities and communities across the globe to spotlight the best towns and cities for bicycling and to provide city leaders with insights to make biking better in their communities.

Three Northwest Arkansas cities were named among the country’s top 20 bike towns in 2020 by PlacesForBikes, a national cycling organization. Rogers was ranked No. 6, Fayetteville No. 10 and Bella Vista No. 14 in a list of the nation’s best cycling cities. Other cities that made the Top 100 were Bentonville at No. 39 and Spring-dale at No. 74.