One Of A Kind: Miss Arkansas, a Greenwood native, remembers two-year reign 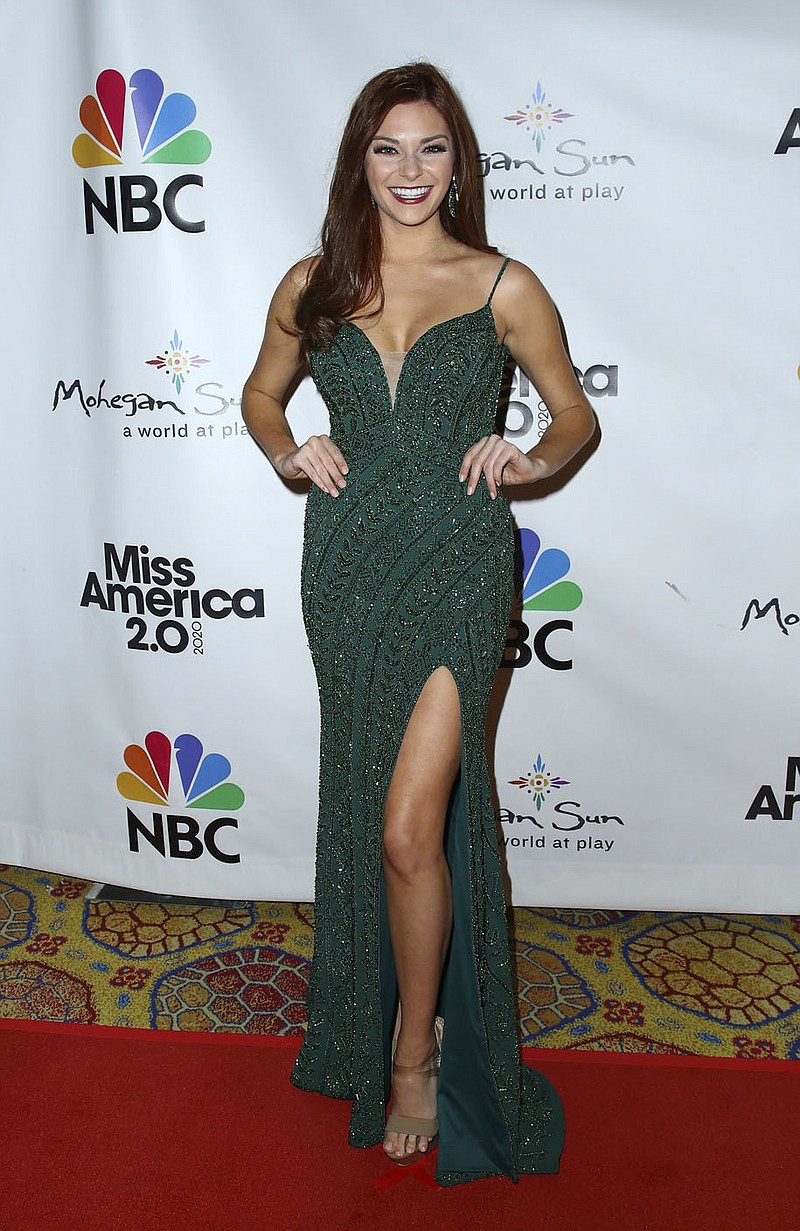 "I hope that I made people feel valued and cared about," muses Dahlem, who grew up in Greenwood, south of Fort Smith. "If I was able to do that, then even if the students and people that I met over my years never remember my name, I pray that they remember that I truly loved every moment of meeting them. Most of all, I hope they remember what I told them: That if I can be Miss Arkansas, then they can achieve whatever goal they set for themselves."

Dahlem competed in the Miss Arkansas Pageant four times before winning the state title on June 15, 2019. Being Miss Arkansas nowadays means being a businesswoman whose job is to inspire younger women to follow in her footsteps, and although she intended to move on if she did not win, "I never really felt like I wasn't gaining from the Miss Arkansas system. Even if I didn't leave with the title of Miss Arkansas for four years, I left with scholarships, friendships and learning experiences."

None of that prepared her for how her reign would turn out. Competing for the title of Miss America 2020 was its own unusual experience as the pageant moved to December and to Mohegan Sun in Connecticut, leaving its Atlantic City traditions behind.

"The pageant itself was very different from what it has historically been," Dahlem remembers. "That alone was difficult to maneuver because just as we learned about a new change that was being made, something else would be changed as well. A revolving door of changes, if you will. However, I made some of my very best friends because of Miss America! There were six of us that became very close. I truly don't know what my experience would have been if we hadn't all had each other! Miss Texas and I still talk almost every day."

Having been named a STEM Scholarship Finalist at Miss America, Dahlem then returned to Arkansas to finish out her obligations for 2019.

"I loved the big crowds at local events." she remembers. "I enjoy being around the energy of other people and community events allowed me to experience the joy of others. But my very favorite thing, and what I will miss the most, are the school appearances I did. I loved standing in a school gym or auditorium and speaking. After every speech, I let the students ask me whatever questions that had, whether it was about Miss Arkansas, my platform, myself, or whatever was on their mind! I will cherish those memories forever."

It was at the beginning of May 2020 that Dahlem became unique in the Miss Arkansas Pageant system.

"It never had occurred to me before that moment that I may get another year. I was incredibly shocked! No woman has ever been Miss Arkansas for more than one year, and of all people to have that opportunity it ended up being me," she says of her reign being extended by the pandemic. "I didn't know that Mountainburg Middle School would be the last school I spoke to in early March 2020, and I didn't know that March 11, 2020, when I was attending the opening of Rogers Top Golf would be the last 'normal' appearance I would have as Miss Arkansas. I would have not changed a thing; I loved every event and school that I was invited to, and even if I had gotten a full 12 months of those events, I still would have wanted more."

But it's not as though she didn't keep busy.

"I was able to visit one school, and a few outdoor events. I did a lot of Zoom calls to read to classrooms for Read Across America Week, and I was able to visit Pulaski Heights Middle School in person, and although we were all masked up and distanced, I am so appreciative for that moment to enter a school in person one last time. I also worked closely with the Arkansas Department of Health to film a commercial encouraging Arkansans to get their vaccine!"

She was also doing something else no Miss Arkansas had ever done.

Now, Dahlem returns to Little Rock for what she calls her favorite week of the year.

"You get to make new friends, compete, and grow as a person," she says of the Miss Arkansas Pageant. "It is truly one of the best experiences a woman could have, and I have always been so grateful that I was given the opportunity to have that experience. It will definitely be different this year being on the other side as Miss Arkansas instead of a contestant, but I know it will still be an experience I will cherish forever."

Asked what she would tell this year's competitors, Dahlem says: "It always works out."

"I competed for five years before I ever was given the title of Miss Arkansas," she goes on. "I remember those four years, leaving after the week of competition. I was always disappointed but as each year went by, I began to be more at peace with the disappointment. Although the job of Miss Arkansas is an amazing experience and opportunity, it is not the end-all, be-all of life. Only 83 women have ever been Miss Arkansas, and while I am incredibly honored to be one of those women, if I had never been given this gift of Miss Arkansas, I would still be Darynne. Everyone's journey is different and when you begin to learn that who you are isn't tied to a title or a job, that's when you become the best version of yourself."

For Dahlem, that means learning to "go with the flow and be comfortable in every situation imaginable. Every high and low was an absolute blessing and taught me so much."

Now she will pursue her educational goal full time to become a pediatric cardiologist.

"This summer I will be conducting research with Arkansas Children's Hospital! I have always had a hope that I would get to work at ACH and I am so excited for this opportunity! After that, I get to be a regular medical school student and continue working on my medical degree."

"Darynne will be remembered as a Miss Arkansas for everyone," says Toni Lindsey, who is the director of media and publicity for the Miss Arkansas Organization and was Darynne's director when she was Miss University of Arkansas (2017) and Miss Northwest Arkansas (2018). "You can put Darynne in a power suit and send her to address Congress about any topic, or put her in a T-shirt and shorts in the floor with a child battling cancer, and she adapts to the situation, engages them and treats them as the most important person in the room." 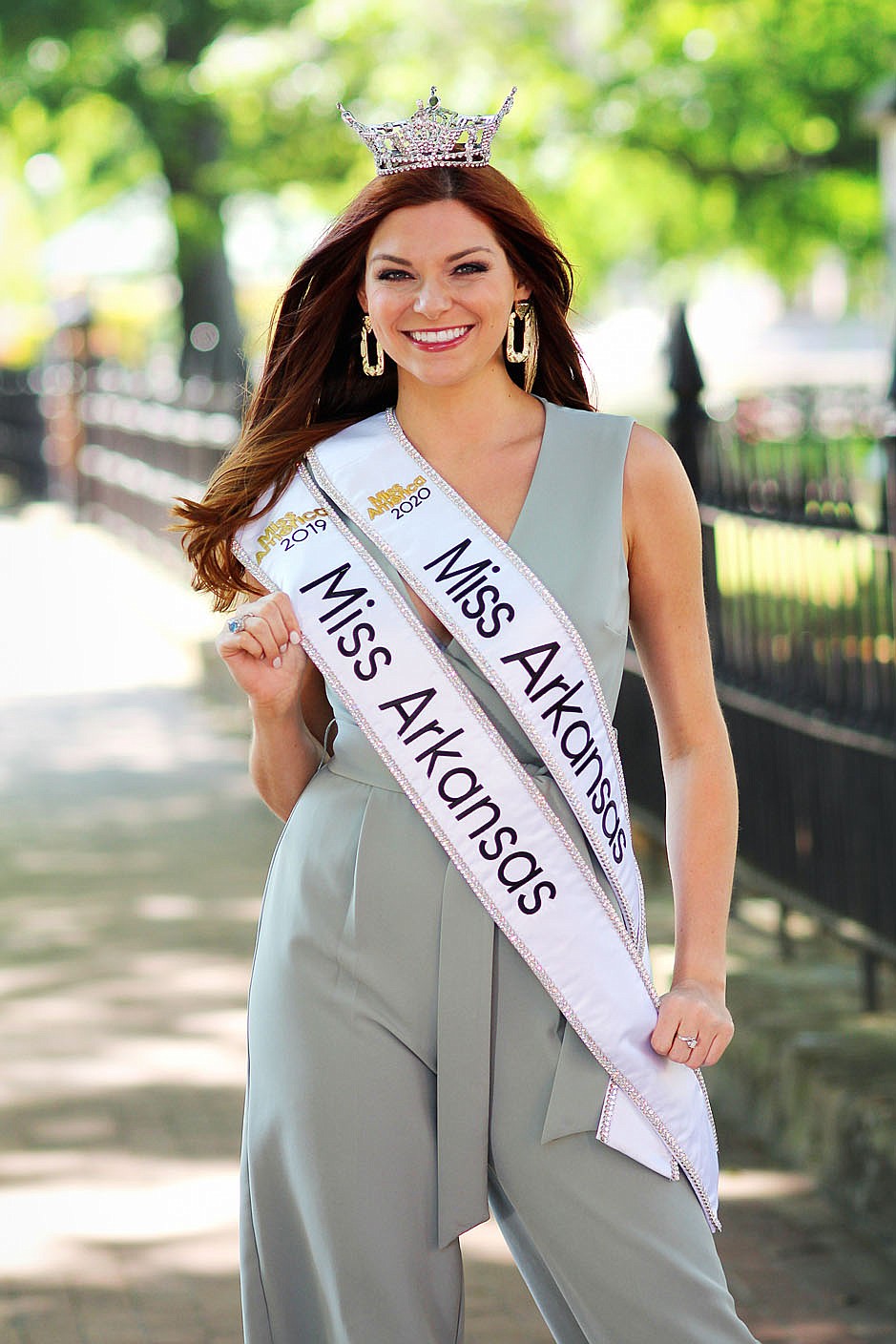 Darynne Dahlem, who grew up in Greenwood and attended the University of Arkansas in Fayetteville, is the first woman to ever serve two terms as Miss Arkansas. Because her reign was extended by the pandemic, she was also in medical school full time during the last half of it. (Courtesy Photo/West Wind Photography) 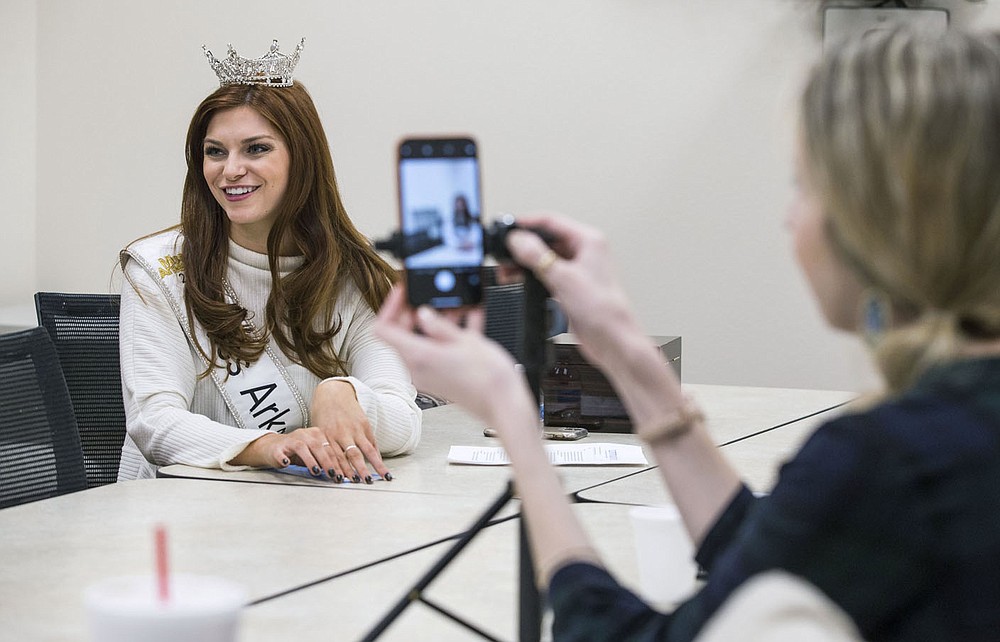 Miss Arkansas Darynne Dahlem records messages Tuesday, Jan. 21, 2020, with Abbie Luzius, community development director with Community Clinic, at the Community Clinic in Fayetteville. The videos will be used on the clinic's social media platforms. Dahlem, who plans to go to medical school to be a pediatrician, visited the Community Clinic location to learn about the medication assisted treatment program that began in March. Abbie Luzius, community development director with the clinic, said the program employs a wholistic approach to treating opioid addiction beyond just using medication. Dahlem described the partnership as a natural fit with her 'Know who you are' platform that fights addiction by encouraging people to resist peer pressure. Check out nwaonline.com/200122Daily/ for today‚Äôs photo gallery. (NWA Democrat-Gazette/Ben Goff) 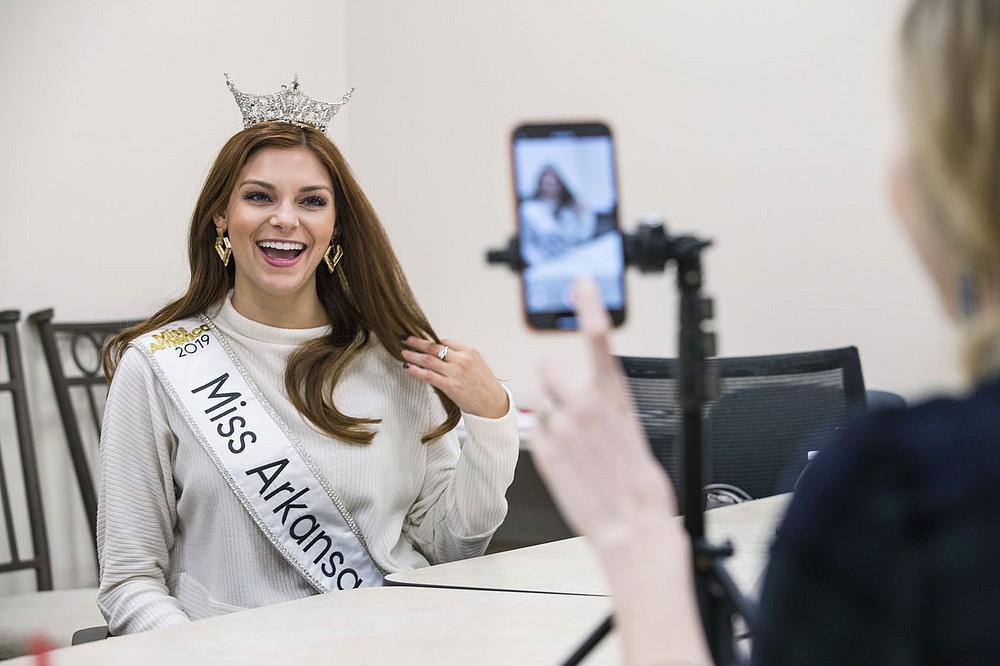 Miss Arkansas Darynne Dahlem records messages Tuesday, Jan. 21, 2020, at the Community Clinic in Fayetteville. The videos will be used to promote awareness on the Community Clinic's social media platforms. Dahlem, who plans to go to medical school to be a pediatrician, visited the Community Clinic location to learn about the medication assisted treatment program that began in March. Abbie Luzius, community development director with the clinic, said the program employs a wholistic approach to treating opioid addiction beyond just using medication. Dahlem described the partnership as a natural fit with her 'Know who you are' platform that fights addiction by encouraging people to resist peer pressure. Check out nwaonline.com/200122Daily/ for today‚Äôs photo gallery. (NWA Democrat-Gazette/Ben Goff)
More News

BONUS — Each of the preliminary competitions and the finals for both Miss Arkansas Outstanding Teen and Miss Arkansas will be streamed on the official website, missarkansas.org. On June 19, fans can watch the finals of Miss Arkansas 2021 live on KATV beginning at 7 p.m.