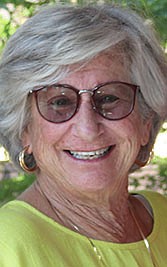 LITTLE ROCK -- Arkansas has lost a philanthropist and patron of the arts.

Sunday would have been her 72nd birthday.

Judy Tenenbaum co-founded the Argenta Community Theater in North Little Rock and donated to many other charities in Central Arkansas.

"That's just one of countless things that she's done, not only for the community but for the entire state," Rick Fleetwood said regarding the theater.

Fleetwood said he and Tenenbaum were next-door neighbors in Little Rock.

"We were like brother and sister," he said. "She loved me, and I loved her."

"She didn't donate just her checkbook," he said. "She would donate her time. Her family would sponsor Riverfest, and she'd be the first one there to set up the tables. She loved far more to be involved than to just make a financial contribution. The arts were her passion."

Judy Tenenbaum was born in New York to Muriel and Daniel Kohn. Her father was a traveling salesman for the Cohn-Hall-Marx Co., selling drapery and upholstery fabric to department stores, hotels and furniture manufacturers.

When she was 8, her father was transferred to Dallas. After she graduated from high school, she enrolled at the University of Oklahoma at Norman. Her first week in college, she met Harold Tenenbaum. When they were both 21, they married, dropped out of college and moved to his hometown of Little Rock.

Harold Tenenbaum had a successful career in the recycling business, allowing the family to donate money to many organizations and political campaigns.

"He made the money, and I gave it away," Judy Tenenbaum told the Arkansas Democrat-Gazette in a 2012 interview.

The Tenenbaums divorced in 2006.

"Judy and I kind of helped save each other," he said. "We became very, very close friends. She truly understood this: having a purpose every day was critical to living a good long life, a healthy life."

"We went to Scandinavia, Israel and Egypt," he said. "She loved to go to different places. She loved to learn. We went to Robben Island, where Nelson Mandela was held. She was very Jewish. She was very proud of her religion, her faith. We went to the Western Wall, and Dachau and a couple of other concentration camps."

"She had a wide variety of interests. We went to the tomb of St. Francis of Assisi. She loved to do things that people who travel don't normally do and to experience that moment. She would always say a prayer no matter whether she was at a temple or a church."

"If Judy was your friend, she was a friend you could definitely count on," Fleetwood said. "She had a saying: 'I've got your back.' When she said that, you knew she meant it. I was blessed to have her as my best friend."

Insalaco said the last project he worked on with Tenenbaum was "Curtain Call for a Cause" at the Argenta Community Theater earlier this month. The event benefits Arkansas Enterprises for the Developmentally Disabled.