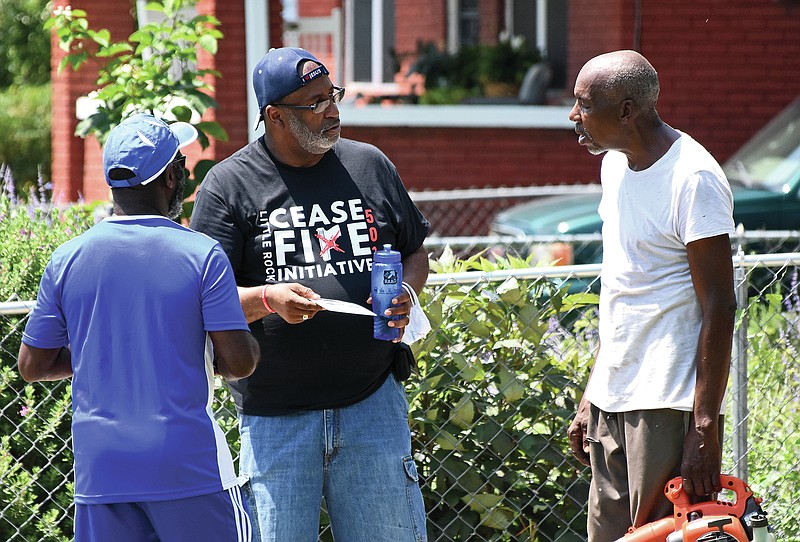 "Operation Cease Fire" is the first of three community outreach initiatives the department is planning. Saturday's was for residents in the Hanger Hill, Pettaway and Meadowbrook neighborhoods, which are served by the department's 12th Street division.

Officers -- including Police Chief Keith Humphrey and Assistant Chief Crystal Young-Haskins -- met with volunteers in Shiloh Baptist Church, Greater Missionary Baptist Church and Crump Park from 11 a.m. to 1:30 p.m. and fanned out from there.

It's about building trust and giving law enforcement a face, Humphrey said.

[Video not showing up above? Click here to watch » https://www.youtube.com/watch?v=mUuaE6emf5o]

"I'm hired to be responsible for the safety in this city, and [community members] need to see the chief is not just a bunch of words," he said. "I'm not a sit-behind-the-desk chief."

Going to events like the one Saturday should be part of any police chief's job, he said.

"Crime never has a day off. I have officers working 24/7, 365. Because I have this title, it doesn't mean I don't have an obligation to do that, [too]. If we're trying to maintain peace in this city, the chief has to set that tone. People need to see the chief out and about."

Incremental increases in community outreach is the name of the game, Humphrey said, adding that it will eventually lower the number of violent crimes committed in the city.

Saturday's volunteers and officers asked community members to pledge to respect others, keep the peace, never use firearms in personal disputes and use their choices and actions to reverse violence in the city.

Lt. Theddus McRae organized the event for the Police Department and joined in providing bicycle escorts for some of the volunteers.

"We've taken the statistics of the violent crime that has occurred over the past year, and this specific weekend was one of our high violent crime weekends," McRae said. "So what we did was we're investing in the community. We're asking them to take a pledge to help us bridge the gap and reduce violence."

June 2020 was the city's highest crime month in a decade, reaching more than 400 violent crimes. May of this year was next-highest with only two fewer such crimes reported.

There isn't a goal or a specific lower number they hope to reach with the Cease Fire initiative, Humphrey and McRae said.

"We want as little crime as we can get, but the only way for us to reach that goal is through the community," McRae said. "This cease fire initiative helps us bridge that gap, takes us out of the patrol car and into [people's] homes to let them know we're concerned about what's going on out here."

Department spokesman Mark Edwards said this weekend is the first of planned monthly visits to neighborhoods in the city.

"We're doing it by substations, so [this one is] 12th Street," Edwards said. "Next month it might be Northwest division, and, of course, the third month would be Southwest Division."

Such community door-to-door non-enforcement policing "improved residents' attitudes toward police," according to a 2019 study from the Proceedings of the National Academy of Sciences of the United States of America.

"Research shows us that initiatives work, and it also gives our officers a chance to get out and meet some of the people in the neighborhoods and sit down and talk with them," Edwards said.

Wrapping up this weekend's effort is a charity basketball game at the Dunbar Recreational Center today at 2 p.m., a news release from Edwards said.

The event is open to the public, and proceeds will go to a yet-to-be-determined charity, Edwards said.