Uncertain in his career but certain about her 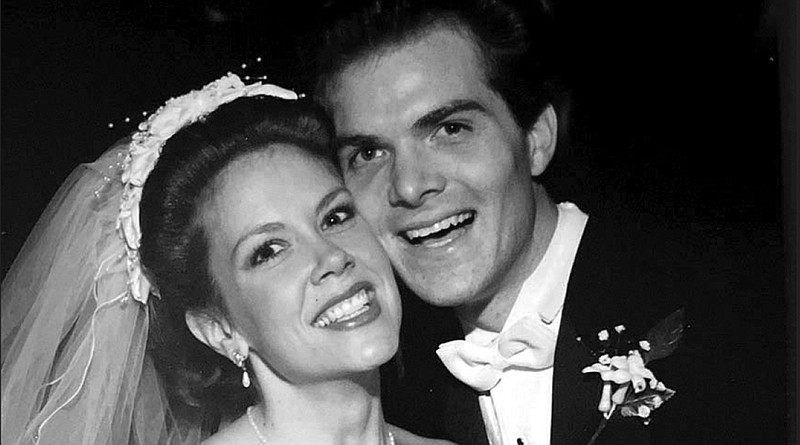 Dana and Eric Spann on their wedding day, Nov. 2, 1991. (Special to the Democrat-Gazette)

Dana Glover felt like she knew Eric Spann before she even met him. He had his eye on the future, though, and he didn't see her in it just yet.

In 1989, Dana had just finished college, moved to Little Rock and started going to First Baptist Church. She inquired about how to get more involved there and was introduced to Lawanda Spann. Lawanda had taught Sunday School for 23 years and Dana began helping her with a class.

Lawanda and her husband had raised three sons, all grown and gone, and she took Dana under her wing. Dana spent hours at the Spann home and she learned about the boys who once lived there, including Eric.

Eric, living in Dallas then, heard about Dana each time he called home.

"They would say, 'Dana's here eating dinner with us,' or 'We're going to see a play with Dana,' or 'Dana and I are having a party for our Sunday School girls,' or 'Dana is sleeping over here because her electricity is out at her apartment,'" Eric says. "I was still trying to find my niche in the world so I wasn't interested in any Danas."

Eric moved back home about a year later, and he sometimes found Dana with his parents at their dining room table.

Dana and Eric became friends, sitting together at Bible study and singles group activities and sometimes got together outside those gatherings.

After about six months at home, Eric began making plans to go to Golden Gate Seminary in Mill Valley, Calif.

"By that time, I had fallen in love with him," Dana says. "I was just enamored."

Everyone around her noticed, she says, with the exception of Eric.

"I thought she was beautiful and fun and I loved her sense of humor," he says. "But I was still trying to figure out what I was going to do in life. I had a terrible job and I couldn't figure out how I was going to earn money and all that stuff so I wasn't trying to get any girl involved in that."

A close friend of Dana's had advised her not to let him forget her while he was away and she took that to heart.

"Everybody on campus, including the professors, knew who Dana was because Dana would send boxes of stuff every week," Eric says.

Eric and Dana planned to get together while he was home for the holidays but she was flying out for a trip with her parents the day he flew in. Eric said he would pick her up at the airport when she returned on Dec. 31 so they could celebrate New Year's Eve. Her flight was delayed by several hours, leaving just enough time for him to drop her off. He flew back to California that day.

"What that kind of showed me was that, dang, I was really looking forward to spending time with her. I was really disappointed," he says.

He was back in Little Rock that April for a wedding, but Dana had a wedding at the same time in Pine Bluff. Dana had asked Eric's parents to pray with her.

"We prayed specifically that Eric and I would talk about our relationship that weekend and that he would bring it up, and that it would be yes or no," Dana says.

She picked him up from the airport, and he said they should talk.

Over breakfast the next day, before Dana left for Pine Bluff, he told her he didn't know if he was the marrying type and that he planned to be a missionary or a pastor and would likely never be wealthy. He also told her he wasn't ready to make a commitment.

"He said, 'But when I turn around to grab the hands of my wife, it's your face that I see. It's your hands that I grab,'" she says. "I cried. I thought that was the sweetest thing."

Dana flew to California on June 4, her birthday. Eric took her to dinner at Equinox, the revolving restaurant at the top of the Hyatt Regency in San Francisco.

He popped the question that night, on their first official date.

"We had never kissed, had never dated," Dana says.

Eric has a bachelor's degree in home economics, with an emphasis on apparel, and he skipped the next semester of seminary to spend time with Dana and to make her wedding dress.

The newlyweds spent the next year and a half exploring the San Francisco area while Eric finished seminary. They moved from there to Dallas and after that to Pine Bluff so Dana could go back to nursing school.

Eight years and four children later, the Spanns moved to Thailand for a five-year stint with the International Mission Board. They now live in Little Rock.

"We've not been afraid to live," Dana says. "San Francisco, even Dallas and Thailand -- we visited all the countries around, Malaysia, Cambodia, Myanmar, Vietnam ... we have had a lot of adventures."

She says: “I thought, ‘Gosh, he’s going to fit in beautifully with my family.’”

She says: “I just remember we were doing all this running around and we got into the car to drive off and when we shut the door, it was just silent.”

He says: “I wanted to see her before the wedding because I didn’t want to cry when I saw her walking down the aisle. Everybody left the bridal room and I went in and I guess it put us both at ease because we knew for sure we were the right ones.”

She says: “Always maintain a united front in public. When you get home you can hash it out but never argue with your spouse in public.”

He says: “We are unanimous on that.”