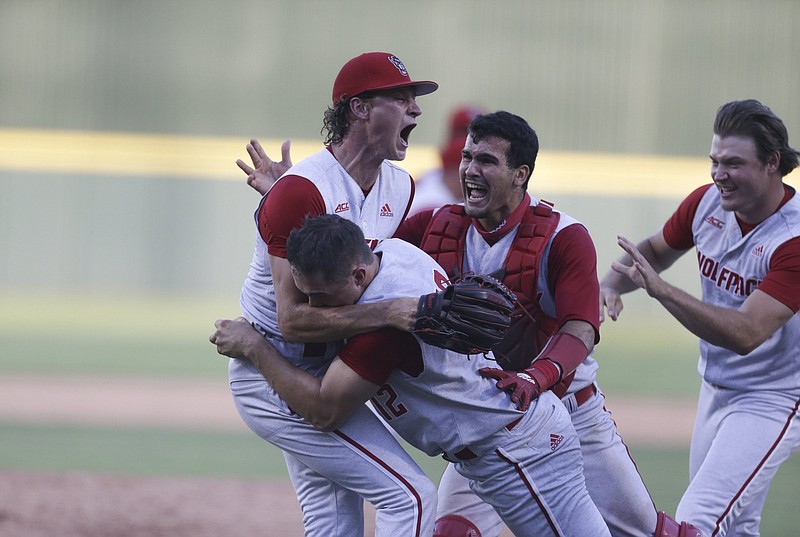 FAYETTEVILLE -- The Arkansas Razorbacks and star pitcher Kevin Kopps enjoyed a dream season in 2021, but it will not have a storybook ending.

North Carolina State stunned the No. 1 University of Arkansas 3-2 on Sunday night in the winner-take-all Game 3 of an NCAA super regional, ensuring that Miami in 1999 will remain the last national top seed to win the College World Series.

North Carolina State shortstop Jose Torres hit a solo home run on Kopps' 118th and last pitch in the top of the ninth inning to provide the winning margin.

[Video not showing up above? Click here to watch » https://www.youtube.com/watch?v=yAVTi__mXio]

Lefty closer Evan Justice (5-2) retired all six batters he faced, ending the game on Jalen Battles' tap in front of the plate, which catcher Luca Tresh fielded and fired to first base to touch off a celebration. Wolfpack first baseman Austin Murr tackled Justice on the infield, where the dog pile commenced.

After a lengthy celebration, the Wolfpack poured a full cooler of Gatorade on Coach Elliott Avent, who guided North Carolina State (35-18) to its third College World Series and second under his watch.

The Wolfpack punched their ticket to Omaha, Neb., the hard way. They became the first team to win a three-game series against the Razorbacks (50-13) all season, did it in front of a rowdy crowd of 11,084 at Baum-Walker Stadium and became the only team to score more than one run on and beat Kopps (12-1).

Arkansas had won all of its 14 series versus one team this season, plus a three-game sweep at the season-opening College Baseball Showdown and a four-game sweep for the SEC Tournament championship.

"What a great series. Just two tough losses the last couple of days," Arkansas Coach Dave Van Horn said. "Really, you've just got to give North Carolina State credit. They played great. They got big hits and their pitchers did a great job."

Kopps, making his first start of the year and seventh of his career, made two key errors with his legendary cutter and they both left the yard.

Jonny Butler stroked a two-run home run to right-center field in the top of the third inning after a Murr walk to give the Wolfpack a 2-1 lead. Then Torres led off the ninth inning with a towering shot to left after falling behind 0-2 for his third home run of the super regional.

"I was just sitting on cutters, and I got something up and I was able to put a swing on it and hit a home run," Torres said.

Arkansas walloped the Wolfpack 21-2 in the super regional opener, but mustered only eight hits in the final two games while dropping a pair of one-run games. The Razorbacks hit .227 in the postseason and had six or fewer hits in five of their last six games.

North Carolina State starter Matt Willadsen, who entered with a 4.97 ERA, allowed one unearned run in his four innings.

Arkansas outfielder Cayden Wallace hit a tying home run, his 14th, off lefty reliever Chris Villaman in the bottom of the seventh inning to tie the game 2-2.

But that was the Razorbacks' only hit in their final 16 batters.

Avent credited pitching coach Clint Chrysler with formulating a game plan to face the Razorbacks. North Carolina State started freshman right-handers with ERAs over 4.00 in its two wins at the super regional.

"He has such a great rapport with these pitchers," Avent said. "He has a great makeup. He's just done an amazing job. To pitch as well as we did against this great Arkansas ballclub is just a tribute to him and our pitching staff."

The Wolfpack outhit Arkansas 16-8 in the final two games.

"We knew we were good enough," Butler said. "We knew we were one of the best teams in the country. To win two one-run games here, we just kept fighting and it feels great."

"Coach Hobbs just asked me if I wanted to start," Kopps said. "He just said I had earned the right, I guess, to tell them yes or no. Yeah, my career and my teammates on the line, of course I wanted the ball."

Willadsen gave the Wolfpack everything they could ask for, lasting 4 innings and giving up 1 unearned run on 2 hits and 4 walks while stranding 5 runners combined in the second and fourth innings by retiring Matt Goodheart on a ground ball and a strikeout.

Arkansas broke on top in the second inning with a little help from the Wolfpack, as third baseman Vojtech Mensik -- playing in the shortstop spot in a heavy shift -- bobbled Christian Franklin's hard grounder and threw late to first.

With one out, Cullen Smith's ground ball toward first base moved the runner to second. Charlie Welch hammered a low, outside pitch the other way on a full count, just inside the first-base bag for an RBI double into the right corner.

The fans got loud when Casey Opitz and Battles worked back-to-back walks to load the bases. However, Willadsen quickly got ahead of Goodheart and retired him on a ground ball to second base to escape with just one run allowed.

Kopps walked Murr with one out in the third inning, then struck out Tyler McDonough looking. Butler fell behind 0-1 but got a pitch he could handle on the next offering and launched a shot to deep left-center field.

Arkansas center fielder Christian Franklin made a huge leap and got his glove over the wall but the ball was just a bit higher. Butler's 13th home run gave the Wolfpack a 2-1 lead.

"When he's on and he really gets that good pitch, gets some good spin on that thing, you can only hope to foul it off," Butler said. "I was lucky enough. I think one of his backed up on him a little bit, and he left it over the middle of the plate."