What to do when your kid plays Roblox all the time

Some experts say video games are good in moderation, but all experts say outside playtime is essential by Amy Brill, The Washington Post | June 14, 2021 at 1:58 a.m. 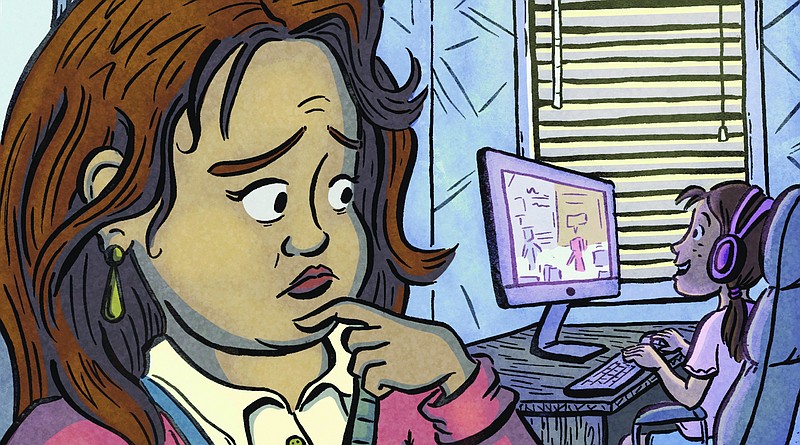 Our collective Year of Living Intimately has finally entered a new phase — Vaccines! Unmasking! — just in time for summer vacation and, wait for it, even more unsupervised, unscheduled hours for my children to roam about the house.

I already know my husband and kids better than I ever imagined, although I still cannot understand how a well-educated 12-year-old can think Thomas Jefferson invented the light bulb, or why an advanced society would force its elders to duke it out online for vaccine appointments. The long-term physical and emotional toll of a year of isolation on my 90-year-old mother and school-age children remains a terrifying mystery.

The locus of these two intense, pandemic-defining feelings — confusion and fear — has, strangely enough, become ... a game. Or, a bunch of games? I'm unsure.

My 9-year-old daughter, who made Lego habitats and fairy potions in the Before Times, now just ... keeps ... playing ... Roblox. If I don't hear her voice, it means she is playing Roblox or watching YouTube videos of other people playing Roblox.

She's addicted, I joke to parent friends, and they nod knowingly, resigned. "I have to hide the devices," they say.

Much has been written about this video game juggernaut, valued at a joystick-breaking $29.5 billion. In 2020, 36 million people — two-thirds of whom were under 16 — spent more than 30 billion hours on the online platform.

[RELATED: What is Roblox?]

Many of those users, it seems, are parented by people who, like me, are worried that their kids are spending too much time playing it.

We've been advised to set boundaries, police their screen time or get on the digital fun bus ourselves and trade some elf shrews with TinkerBelle2012. But my fun bus does not stop at Adopt Me (one of the countless user-generated Roblox games, in which players adopt and trade fantastical digital pets). And I'm fine with her playing, as long as she's not actually addicted to something that's bad for her.

"As parents we look for the quick answer," explains Nir Eyal, author of "Indistractible: How to Control Your Attention and Choose Your Life," "but studies show that up to three hours of extracurricular time spent on screens has no deleterious effects." It's really just one study that studied the earlier studies, but Eyal is sure that Roblox (and most other things our kids are looking at on their devices) is not addictive, and that we are blaming technology for problems that have nothing to do with elf shrews.

The bigger issue is: What are kids looking for online? Eyal thinks children are deficient in three core areas that promote well-being and human development: connection, competence and autonomy. Stripped of in-person school, socializing, teams, clubs and just about everything else in real life (or "IRL"), it makes sense they'd seek these things online.

"So you're saying I should pay more attention to her then?" I pictured the frayed tatters of my remaining free time vanishing like the string cheese and Pirate's Booty I bought two hours ago.

"No, it's paying less attention." Eyal, whose 6-year-old learned to police her own screen time using the microwave timer, cited psychologist and free-play "unschooling" guru Peter Gray. "Time spent in free play — with no parents, teachers, coaches — has declined precipitously."

In other words, some parents are driving our over-scheduled, test-prepped kids into Roblox world, where they can just ... do their own thing.

As a passionate advocate of paying less attention to my children, I'm relieved to hear this. But the American Psychiatric Association definitely considers internet gaming disorder to be a thing, defining it back in 2013 as "persistent and recurrent use of the internet to engage in games, often with other players, leading to clinically significant impairment or distress."

One of the reasons it's so hard for me to know if my kid's playing is problematic, though, is that scientists don't seem sure, either. Only about half of the 200-plus scholars in one study expressed confidence in the criteria for internet gaming disorder; they were more concerned about the field over-pathologizing normal youths. If they don't even know, how am I supposed to know?

I asked Anna Lembke, professor and medical director of addiction medicine at Stanford University School of Medicine and author of the forthcoming "Dopamine Nation: Finding Balance in the Age of Indulgence." Her take was unambiguous:

"Video games are addictive, and we don't need studies to tell us so. We just need to look around at all the people, including our own kids, who can't stop playing them."

She explained that playing video games releases high amounts of dopamine, the brain's pleasure neurotransmitter. "Gaming is fun and feels good in the moment, but repeated use leads to anxiety, depression, loneliness" and all the other things you already know because everyone knows what addiction is, you idiot. She didn't say that, but she may as well have.

"The result is that we need more, and more-potent forms, of the drug over time to get the same effect," Lembke told me, "and when we're not using our drug, we experience a dopamine-deficit state akin to a clinical depression."

"I can state with absolute clinical certainty that [video game addiction] is indeed a real issue," he wrote back almost immediately. "The folks who say it's not really an addiction simply don't understand addiction. They'll say, 'Well, the real issue is, say, depression, and the kid is escaping or self-medicating the depression via gaming.' But that's true for almost any addiction."

Excess is the problem with habit-forming platforms like Roblox (and Minecraft and Fortnite before it); kids have a hard time limiting their use because they don't have fully developed frontal cortices, which help regulate impulse control and decision-making. But what is "excessive" when it comes to games? Fewer than nine hours a week is a good barometer, but the number of hours is less important than whether the child's schoolwork, relationships or mood are suffering as a result of time spent online.

TURN OFF, TUNE OUT?

These two experts' take-no-prisoners messages sent me skulking to my child's room to make sure she hadn't sneaked back onto her iPad instead of going to sleep. She hadn't. I kept thinking about my late father, born in 1928, who never used a computer, called our television "the idiot box," hated rock 'n' roll and was adamantly opposed to marijuana, which he considered a deadly drug.

What if hysteria about Roblox is just the latest moral panic on a centuries-long list of cultural flash points destined to age poorly? Think: Galileo's assertion that Earth circled the sun; "Reefer Madness"; and the works of Victor Hugo, Elvis Presley, Robert Mapplethorpe, 2 Live Crew and Madonna.

Today's "immersive and interactive" screens make them quite a bit more stimulating than my "Star Trek" marathons did back in the rabbit-ear antenna days, Kardaras points out. Some kids — those with attention-deficit hyperactivity disorder for example — are at even higher risk for addiction than others.

But this generation of kids can't just turn off and tune out. School, television, communication, information — everything is screen-based. So how do we manage it?

The short answer: Stick with two long-standing pillars of child rearing: Moderation is good, and kids need to run around outdoors.

Talk to your kids about creating limits on game-playing, and give them agency over setting timers and adhering to agreed-upon boundaries. And then carve out time for them to go outside and play. They need to make up games, climb trees and chase each other. They need to build things, use their bodies and their senses, and engage with the physical world.

As long as we make sure they're doing that, off-screen, for a solid chunk of time, on a regular basis, they will probably be OK.

There is no app for that.

Amy Brill is the author of the novel "The Movement of Stars."

Print Headline: Is my kid a Roblox addict?