Cases down in most states, but new surges feared in others by Compiled Democrat-Gazette Staff From Wire Reports | June 14, 2021 at 7:13 a.m. 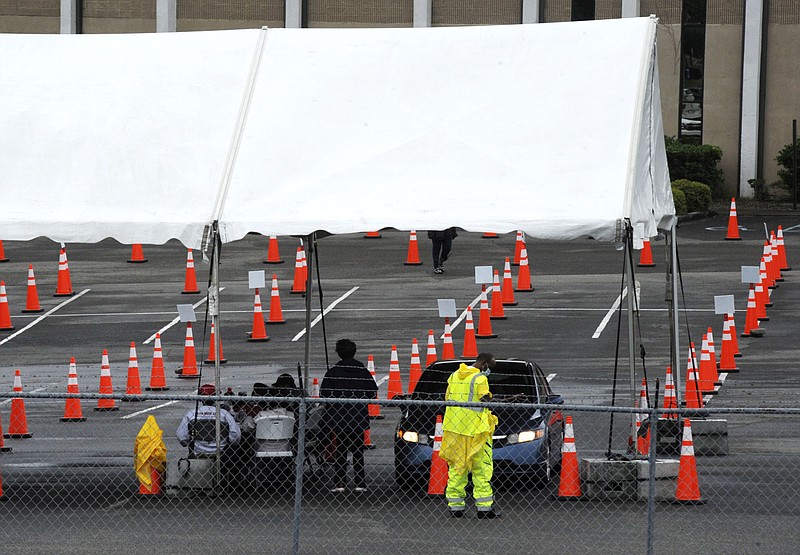 FILE - Workers at a mostly empty COVID-19 vaccination clinic located at Cathedral of the Cross A.O.H. Church of God in Birmingham, Ala., are shown in this Monday, May 3, 2021, file photo. New COVID-19 cases are declining across the most of the country, even in some states with vaccine-hesitant populations. But almost all states bucking that trend have lower-than-average vaccination rates, and experts warn that relief from the pandemic could be fleeting in regions where few people get inoculated. (AP Photo/Jay Reeves, File)

JACKSON, Miss. -- New covid-19 cases are declining across most of the country, even in some states with vaccine-hesitant populations. But almost all states bucking that trend have lower-than-average vaccination rates, and experts warn that relief from the pandemic could be fleeting in regions where few people get inoculated.

Case totals nationally have declined in a week from a seven-day rolling average of nearly 21,000 on May 29 to 14,315 on Saturday, according to data from Johns Hopkins University.

However, Arkansas is one of eight states that have seen their seven-day averages rise from two weeks earlier, according to Johns Hopkins.

Experts said some states are seeing increased immunity because there were high rates of natural spread of the disease, which has killed nearly 600,000 Americans.

"We certainly are getting some population benefit from our previous cases, but we paid for it," said Mississippi State Health Officer Dr. Thomas Dobbs. "We paid for it with deaths."

More than 7,300 Mississippians have died in the pandemic, and the state has the sixth-highest per-capita death rate.

Dobbs estimated that about 60% of the state's residents have "some underlying immunity."

"So we're now sort of seeing that effect, most likely, because we have a combination of natural and vaccine-induced immunity," he said.

In addition to Arkansas, the states that have seen their seven-day rolling averages for infections rise from two weeks earlier are Alabama, Hawaii, Missouri, Nevada, Texas, Utah and Wyoming, according to Johns Hopkins. All of them except Hawaii have recorded vaccination rates that are lower than the U.S. average of 43% fully vaccinated, according to the U.S Centers for Disease Control and Prevention.

The 10 states with the fewest new cases per capita over that time frame all have fully vaccinated rates above the national average.

Medical experts said a host of factors is playing into the drop in case counts across the country, including vaccines, natural immunity from exposure to the virus, warmer weather and people spending less time indoors.

But Dr. Leana Wen, a public health professor at George Washington University, said she is concerned that the natural immunity of those who have been exposed to coronavirus may soon wane. And she's worried that states with low vaccination rates could become hot spots.

"Just because we're lucky in June doesn't mean we'll continue to be lucky come the late fall and winter," said Wen, former health commissioner for Baltimore. "We could well have variants here that are more transmissible, more virulent, and those who do not have immunity or have waning immunity could be susceptible once again."

Dr. Albert Ko, who chairs the Department of Epidemiology of Microbial Diseases at Yale, said there is no accurate data to show what percentage of the population in "high burden" states have been exposed to the virus, but he said estimates have put it as high as 50%.

"I think it doesn't deny the importance of vaccination, particularly because the levels of antibodies that you get that are induced by natural infection are lower than that of what we have for our best vaccine," Ko said.

He said it is important that even those exposed to the disease get vaccinated because natural immunity does not last as long as vaccine immunity and the levels of antibodies are lower.

Wen said research strongly suggests that vaccinations provide a benefit to those who already have some antibodies because of infection.

"I think it is a fallacy that many people have that recovery means they no longer need to be vaccinated," she said.

Meanwhile, a federal judge in Texas dismissed a lawsuit brought by employees of Houston Methodist Hospital who challenged the hospital's vaccination requirement.

U.S. District Judge Lynn Hughes of the Southern District of Texas issued a ruling Saturday that upheld the hospital's policy, announced in April. The judge said the hospital's decision to mandate inoculations for employees was consistent with public policy.

And he rejected the claim by Jennifer Bridges, a nurse and the lead plaintiff in the suit, that the vaccines available for use in the United States were experimental and dangerous.

"The hospital's employees are not participants in a human trial," Hughes wrote. "Methodist is trying to do their business of saving lives without giving them the COVID-19 virus. It is a choice made to keep staff, patients and their families safer."

The judge's decision appeared to be among the first to rule in favor of employer-mandated vaccinations. Several major hospital systems have begun to require shots.

But many private employers and the federal government have not instituted mandatory immunization as they shift operations back to office settings. Earlier this year, the U.S. Equal Employment Opportunity Commission issued guidance allowing employers to require vaccines for on-site workers.

In Houston, Bridges was among those who led a walkout June 7, the hospital's deadline for getting the vaccine. The next day, the hospital suspended without pay 178 employees who refused to get a shot.

Bridges cited the lack of full Food and Drug Administration approval for the shots as justification for refusing to get vaccinated. But the FDA, which has granted emergency-use authorizations for three vaccines, says clinical trials and post-market study show they are safe, as does the Centers for Disease Control and Prevention.

The judge also noted that Texas employment law only protects employees from termination for refusing to commit an act that carries criminal penalties.

And the judge called "reprehensible" the lawsuit's contention that a vaccination requirement was akin to medical experimentation during the Holocaust.

"Bridges can freely choose to accept or refuse a COVID-19 vaccine, however if she refuses, she will simply need to work somewhere else," he said, also rejecting the argument that employees were being coerced.

"Every employment includes limits on the worker's behavior in exchange for remuneration. That is all part of the bargain," Hughes concluded.

In a statement late Saturday, Dr. Marc Boom, chief executive of Houston Methodist, said: "Our employees and physicians made their decisions for our patients, who are always at the center of everything we do."

The hospital said it would begin proceedings to terminate employees who were suspended if they do not get vaccinated by June 21.

"All of my clients continue to be committed to fighting this unjust policy," Woodfill said in a statement. "What is shocking is that many of my clients were on the front line treating COVID-positive patients at Texas Methodist Hospital during the height of the pandemic. As a result, many of them contracted COVID-19. As a thank you for their service and sacrifice, Methodist Hospital awards them a pink slip and sentences them to bankruptcy."

California is finally about to fully reopen its economy Tuesday for the first time in 15 months.

During the darkest days of the pandemic, Martha Medina would occasionally slip into her shuttered store on Los Angeles' oldest street to ensure everything was secure.

Colorful folklorico dresses from each of Mexico's 32 states lined the walls. Black charro suits worn by mariachis and adorned with ornate gold or silver trim hung from a rack in the back. Brightly painted Dia de los Muertos folk art skulls and figurines were safely locked behind a glass case.

Missing were customers, employees and happy pulses of traditional Latin American music such as cumbia, mariachi and son jarocho, the Veracruz sound.

"Those days I felt very sad," Medina said. "I had the feeling I would never open the shop again."

Back in business now but with government-imposed restrictions, Medina and other merchants and restaurateurs on Olvera Street -- and those around the state -- are still struggling and facing an uncertain future even as the state reopens.

"My only hope is to continue day to day," said Medina, who remains optimistic. "I don't expect normal. I expect semi-normal."

California imposed the first statewide shutdown in March 2020 and is among the last to fully reopen, though businesses have operated at reduced capacity for months. It was an early model for how restrictions could keep the virus at bay, but later became the U.S. epicenter of a deadly winter surge that overwhelmed hospitals in Los Angeles and other areas.

More people tested positive for the virus in California -- about 3.8 million -- and more people died -- 63,000-plus -- than elsewhere in the country. However, the nation's most populous state had a lower per-capita death rate than most others.

For the past couple months, the state has experienced among the lowest rates of infection in the U.S. Its vaccination level also is higher than most other states; two-thirds of those eligible have gotten at least one dose.

Gov. Gavin Newsom long ago set June 15 as the target to lift restrictions on capacity and distancing regulations for nearly all businesses and activities. But reopening doesn't necessarily mean people will immediately flock to places and events they once packed.

Olvera Street has long thrived as a tourist destination and symbol of the state's early ties to Mexico. The location where settlers established a farming community in 1781 as El Pueblo de Los Angeles, its historic buildings were restored and rebuilt as a traditional Mexican marketplace in the 1930s.

As Hispanics in California have experienced disproportionately worse outcomes from covid-19, so too has Olvera Street.

In addition, the location does not lend itself to options that gave other businesses a chance, such as curbside pickup or takeout meals. While the city, which owns the property, has forgiven rent through June, owners are still hurting.

Most businesses have reduced hours and closed a few days a week, said Valerie Hanley, treasurer of the Olvera Street Merchants Association Foundation and a shop owner.

"We're not like a local restaurant in your town," Hanley said. "We're one of those little niche things. If you can't fill the niche with the right people, we're in trouble."

Medina's shop, Olverita's Village, which used to be open daily, has cut back to five days a week.

She's mindful of the lives lost in the pandemic, including several of her Mexican suppliers -- an artisan who shaped large pottery vases, a leather worker and two women who embroidered shirts. She's thinking of honoring them when Day of the Dead is celebrated in November, when she hopes business will be better.

Information for this article was contributed by Dylan Lovan, Leah Willingham, Pat Eaton-Robb, Brian Melley and other staff members of The Associated Press; and by Sheila Kaplan of The New York Times. 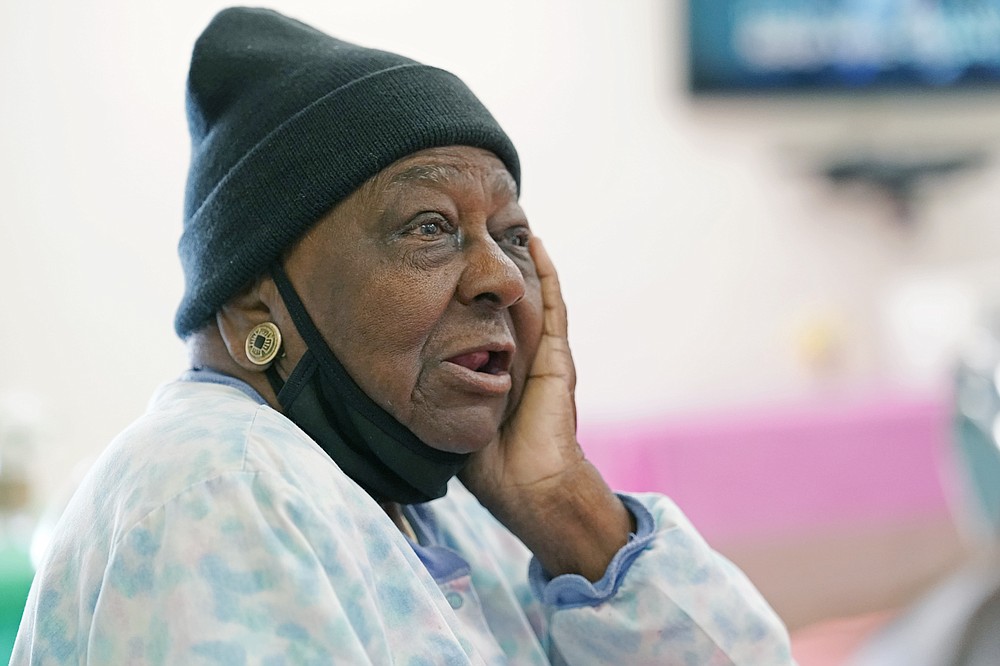 FILE - P.M. Browner, 88, speaks about her apprehension over receiving the COVID-19 vaccine, while waiting for a transportation bus at the Rev. S.L.A. Jones Activity Center for the Elderly to take her and other seniors to the Aaron E. Henry Community Health Service Center to receive a vaccination, in Clarksdale, Miss., in this April 7, 2021, file photo. New COVID-19 cases are declining across the most of the country, even in some states with vaccine-hesitant populations. But almost all states bucking that trend have lower-than-average vaccination rates, and experts warn that relief from the pandemic could be fleeting in regions where few people get inoculated. (AP Photo/Rogelio V. Solis, File)
ADVERTISEMENT