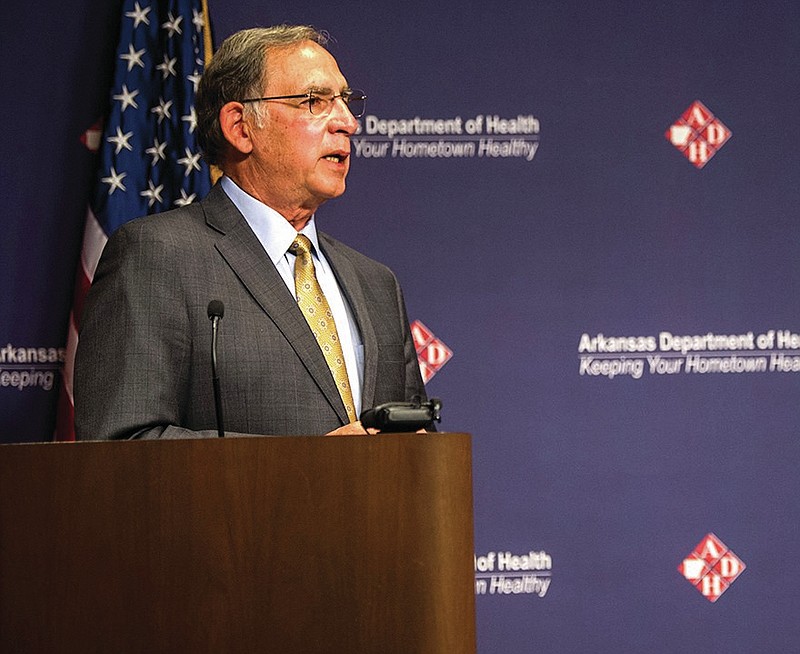 U.S. Sen. John Boozman talks to the press during an event at the Arkansas Department of Health on March 30.

The two-term Republican senator from Rogers was joined on the tour by Garland County Judge Darryl Mahoney, County Attorney John Howard and former County Judge Larry Williams, who serves on the board of directors for the Area Agency on Aging of West Central Arkansas.

The property at 225 Hazel St. reverted to the federal government in December.

The complaint the U.S. Department of Health and Human Services filed in the U.S. District Court for the Western District of Arkansas in September against Malvern National Bank and Quapaw House Inc. said the property was mortgaged without HHS consent, triggering the reversion clause in the quitclaim deed that conveyed the property to Quapaw House in 2003.

According to judgments entered against the bank and Quapaw House, the deed prevented Quapaw House from mortgaging the property unless authorized in writing by HHS. The property was part of the collateral the outpatient and residential service provider for people with mental health and substance use disorders used to secure a $1 million loan from the bank in November 2019, according to property records.

The federal court ruled that mortgaging the property without HHS consent triggered the agency's reversionary interest stipulated in the 2003 deed.

The Garland County Circuit Court declared Quapaw House insolvent in September and appointed a receiver to distribute its property to creditors. Mahoney said the building at 225 and 227 Hazel St. has been vacant for about two years.

"We were over looking at the Quapaw Center and trying to hash around various things that might be of value and making sure that property is acquired in some way," Boozman said. "We don't want it to get in a state of disrepair. It's really a nice building, a nice facility. We'll be working to facilitate whatever use that is. The Government Service Administration is the one who has control of that. ...It's really a unique facility. It is a building that needs to be preserved."

According to information provided by the Garland County Historical Society, local architect I. Granger McDaniel designed the building in 1972. The building is one of several McDaniel designs influenced by the aesthetic Frank Lloyd Wright popularized, J. Mason Toms noted in the organization's 2017 journal.

The Weyerhaeuser offices at 810 Whittington Ave. and the former Hot Springs Savings & Loan Auto Bank at 200 Park Ave. McDaniel designed in 1956 and 1967 were influenced by the Wright aesthetic, the article read.

"However, the building that best illustrates the arc influence of Wright in McDaniel's work is the former Social Security Administration Office, now Quapaw House," Toms wrote. "This 1972 design closely resembles the form and style of the Solar-Hemicycle House by Wright. The fieldstone walls, sections of glazing, as well as the general footprint of the building, all speak to this connection."

McDaniel was a pilot before he became an architect, taking flying lessons at Hot Springs Memorial Field while he attended Hot Springs High School. Toms said the precocious aviator's life "was the stuff of movies," inspiring the Virgil Hilts character played by Steve McQueen in the 1963 film "The Great Escape."

"In 1941, at age 17, Granger McDaniel made his way to Canada with a forged diploma and forged birth certificate to enlist in the Royal Air Force," Toms wrote. "At the enlistment station he informed officials that he had flying experience, so they assigned him to the RAF Eagle Squadron, a special division that was established for American pilots to be able to fly in the war before the United States officially entered the conflict."

At 19, McDaniel was promoted to captain after his bomber crew received a citation for courage and skill from King George VI in 1942. His plane was shot down over the North Sea later that year.

McDaniel was one of three members of the seven-man crew who survived the crash. A Danish fishing boat picked them up and turned them over to the Nazis, who sent McDaniel to the Stalag Luft III prisoner-of-war camp in Poland.

"It was also this camp where the movie 'The Great Escape' was set," Toms wrote. "McDaniel quickly earned a nickname at the camp, the 'Cooler King.' This moniker was given to him because he was constantly breaking the camp's code of conduct either by trying to escape or by just causing general mayhem. These infractions would result in McDaniel being sent to solitary confinement, which was nicknamed 'the cooler' because it is where you would be sent to cool your heels.

"'Cooler King' was also the nickname of Steve McQueen's character in 'The Great Escape' because the character of Virgil Hilts was based on McDaniel."

Unlike Hilts, McDaniel eventually escaped the prison camp. On April 30, 1945, he and a fellow prisoner reached the American lines at Torgau, Germany.

"A little over a week later the Nazi forces surrendered, and McDaniel was able to spend V.E. Day in Paris," Toms wrote. "Shortly after this, he was discharged and sent back to America, a place he had not seen in almost four years. He returned home a hero, but he could not rest on his laurels just yet. He was still a young man, and he knew he still had a great deal to contribute to the world."