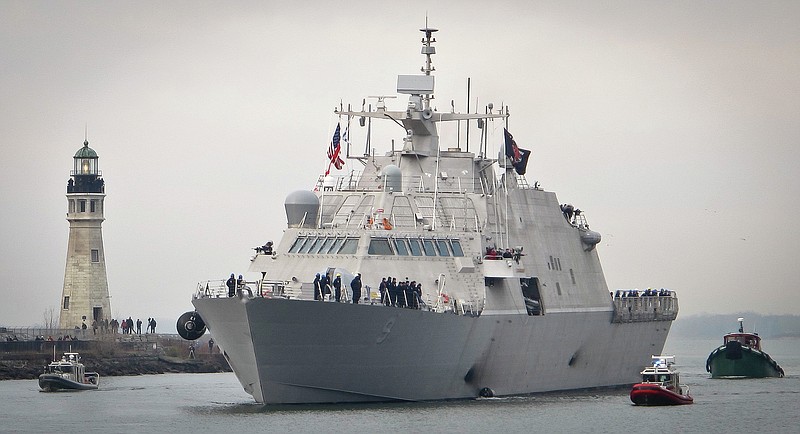 The new USS Little Rock arrives at Buffalo harbor with a police and fireboat escort, Monday, Dec. 4, 2017, in Buffalo, N.Y. The littoral combat ship will be docked on the Lake Erie waterfront until its commissioning Dec. 16, 2017. (AP Photo/Carolyn Thompson)

The USS Little Rock's time in service stands to be coming to an end as a proposed budget for the U.S. Navy shows the ship scheduled for decommission in 2022.

If decommissioned, then the capital city's namesake ship, currently stationed in Mayport, Fla., will have served about five years.

It is one of 15 ships on the chopping block for 2022 and one of four littoral combat ships set to be decommissioned for a total of $186.1 million in savings, Navy budget documents show.

"Decommissioning these two ships includes a cost avoidance strategy, so that scarce maintenance funding can be allocated to the highest priority ships," the overview says.

When the Navy christened its first vessels in a new class of littoral combat ships, they were characterized as fast, agile and capable of operating close to shore against missile-firing boats and small submarines. But today, the Navy faces more capable warships deployed by China and Russia, leaving officials to figure out what to do with their littoral fleet.

Ron Maxwell, coordinator of the ship's Namesake Committee, remembers the 2017 commissioning ceremony of the USS Little Rock in Buffalo, N.Y.

"It was 24 degrees and a light snow falling, but a beautiful ceremony," Maxwell, a Navy veteran, said recently. "We had a live feed at the Ron Robinson Theater" in Little Rock.

It is disappointing to hear about the possible decommissioning of the ship, Maxwell said.

"I know when a ship is decommissioned, it can stay decommissioned for many years," Maxwell said. "The name won't be out there on the high seas representing our city for a good while."

The USS Little Rock was commissioned in Buffalo, where the original 1945 warship named after the city sits as a museum, according to an Arkansas Democrat-Gazette article at the time. Former Navy Secretary and Mississippi Gov. Ray Mabus is credited with continuing the USS Little Rock name. He served on the original ship in the 1970s.

Each crew member received a jacket with the ship's crest embroidered on the left breast, a hunting knife from the Arkansas Game and Fish Commission and a gift bag from the Little Rock Convention and Visitors Bureau.

A painting of the capital city's skyline from the Arkansas River's north shore also was provided by the cities of Little Rock and North Little Rock.

Construction of the $360 million Lockheed Martin ship started in 2012.

Maxwell said there is pride in having a ship named after a city. Crew members from the ship have even traveled to Little Rock on goodwill missions to learn about its namesake city, he said.

"Several of us toured them around and showed them the highlights of the city," Maxwell said. "As they take their mission around the world and people say, 'Well, where is Little Rock?' they can tell people about the city."

Not long after the USS Little Rock was commissioned, it found itself and its 70-person crew trapped in icy conditions near Montreal on the St. Lawrence Seaway. It ended up spending the entire winter iced in the waterway, Maxwell said.

The Department of Defense budget was submitted to Congress on May 28.

Information for this article was contributed by Andrew Dyer of The San Diego Union-Tribune.