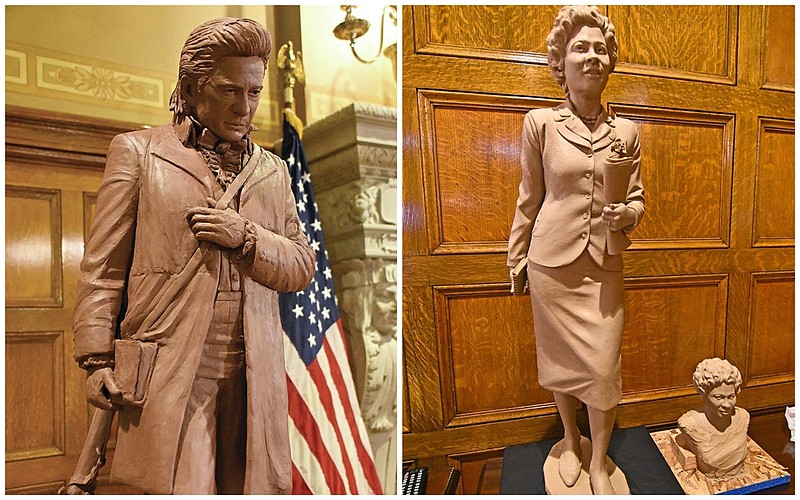 A Little Rock artist and a sculptor from Idaho have been selected to create new statues to represent Arkansas in the U.S. Capitol.

Members of the Capitol Arts and Grounds Commission and the National Statuary Hall steering committee ranked their first, second and third choices from among the three finalists for each of the two sculptures after viewing presentations and clay models from the artists last week.

The panel reviewed the final scores at a meeting Monday afternoon and recommended the best-scoring artists to Republican Secretary of State John Thurston, who accepted the recommendations.

In 2019, the Arkansas Legislature passed a law ordering the replacement of the two statues representing the Natural State in the U.S. Capitol. Congress in 1864 invited each state to submit up to two bronze or marble statues to be placed in Statuary Hall, and they now occupy other areas in the U.S. Capitol as well.

Victor was among the three finalists for both statues and was ultimately selected to sculpt Bates' likeness. He was chosen over J. Brett Grill of Grand Rapids, Mich., who scored the second-highest, and Jane DeDecker of Loveland, Colo.

Victor is the only living artist to have three works in Statuary Hall, according to his website.

His model of Bates, a mentor to the Little Rock Nine and the co-publisher of a newspaper focused on civil rights and issues in the Black community, depicts her with a newspaper in one hand and a spiral-bound notebook and pen in the other.

In a presentation to the statue selection panel last week, Victor said he was inspired by reading about her life and how she turned the pain of losing her mother as a young girl into positive action.

"Her story is not only incredibly moving, but it's courageous, and as an artist there's nothing that you could possibly do or work on that could be more inspiring than Daisy's life," he said.

He said the stance he chose for the sculpture, which depicts her stepping forward, was inspired by a photo of Bates leading a group of people at a civil-rights march while holding a newspaper under one arm. The stance symbolizes how she made strides forward for Black Americans, Victor said.

He described her smile as "enigmatic yet optimistic," which he said is intended to express her leadership and energy.

Kresse was chosen to sculpt Cash's statue over Victor, who ranked second-highest, and over Craig Campbell of Wichita, Kan.

In his presentation to the panel, Kresse touted his past work making busts of Arkansas musicians for their hometowns, including Levon Helm, Sister Rosetta Tharpe and a younger version of Cash.

His model of Cash for the Statuary Hall wears a suit with a ruffled collar and sleeves under a long trench coat and carries a Bible under one arm and his guitar on his back.

Kresse said he sculpted the guitar strap so it draws a line from Cash's Bible to his heart.

He told the panel that he aimed to capture Cash's main motivating factors, which included his faith as well as the trauma from the death of his brother.

In sculpting the face, Kresse said he sought to capture pain, determination and wonder. The sculpture's expression is intended to show Cash reflecting on his life and what made him the man he was, Kresse said.

"The more I learned about him, the more my respect and love for him just flew through the roof," he said, adding later that Cash "wasn't trying to pull off somebody that he wasn't, and that's why all these different groups claim him as their own."

The panel's recommendations were made and accepted with little discussion Monday.

Shane Broadway, chairman of the National Statuary Hall steering committee, said all five finalists were "some of the most talented people I've had the opportunity to meet."

Broadway said he had sent photos of the statues, without the artists' names, to family members of Cash, who were pleased with the panel's decision.

"I have an email, a message from Rosanne, that that was exactly the look that she remembers her daddy," Broadway said.

Thurston's office will now begin contract negotiations with the chosen artists. If contracts aren't agreed upon with the first-choice artists, then the next-best-ranking artists will be commissioned.

The 2019 legislation included an unfunded appropriation of $750,000, and officials said last month that more than $780,000 in private donations and grants has been raised for the project.