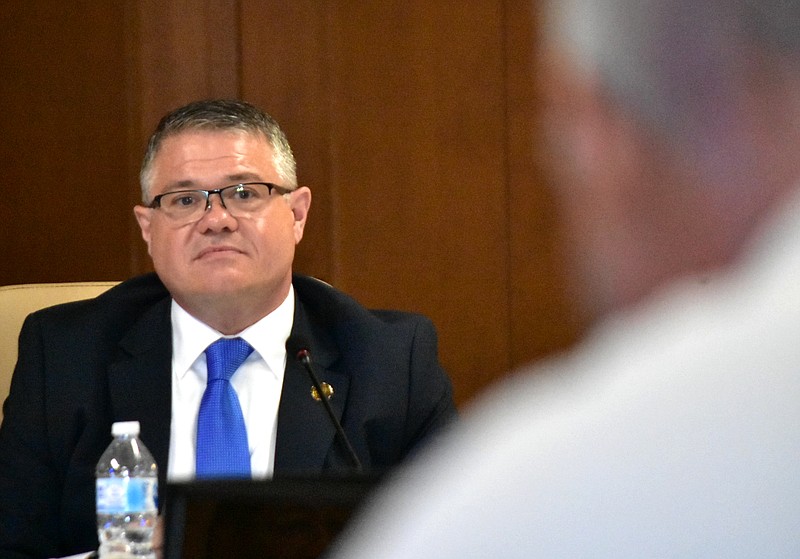 Paul George respects Robert Jones so much that he chose to follow the Kingsland, Ga., police chief to Pine Bluff for a tour of the city as Jones interviewed for the same position with city leaders and the public Monday.

"Chief Jones is a really good leader," said George, a lieutenant on the Kingsland force. "He's actually the best chief, I think, in the state of Georgia. I'd hate to lose him and get a chief that would let our department go to shambles. I know whatever department he goes to, no matter what state it's in, that department will thrive. So that's why I'm willing to leave the department I'm at, which is where he is, to go where he's going to be, because wherever I go, that agency is going to thrive."

Jones fielded questions for about 40 minutes at Jefferson Regional Medical Center's Merritt Chapel, hours before taking questions from the public at the Pine Bluff Convention Center.

Mayor Shirley Washington said she granted George permission to travel to Pine Bluff with Jones, who is completing a three-day stay today. Jones told members of the search committee and council members that he has not promised George a job, and Washington made clear that George was not interviewing for a position.

George said he's not concerned about whether he'll be hired in Pine Bluff.

Jones was announced June 4 as the lone finalist for Pine Bluff police chief out of more than 30 applicants. Washington said Monday that she would meet with members of the search committee either today or Wednesday before making the final decision on whether to offer the position to Jones.

If he's offered the job and accepts, then Jones will take over on or after July 1, when Kelvin Sergeant officially retires after 26 years on the force. Sergeant has been Pine Bluff police chief since 2018.

If Jones were rejected, Washington said, then a second round of interviews would begin.

George was called up to the meeting roundtable to state his case for Jones, 46, who has been police chief in Kingsland for almost two years. Kingsland is a steadily growing town of almost 19,000 residents that is located 35 miles north of Jacksonville, Fla. Jones is seeking to helm a Police Department in a city of an estimated 39,800 that has seen a steady decline in population since the 1990s.

Jones, who also served as police chief in Adairsville, Ga., from 2011-14, told Pine Bluff leaders that he sees his job as a personal challenge and a mission.

"I think it's where God has led me," he said. "We've just got to see if it's touched the hearts of everybody else that they feel this is where I need to be."

Council Member Joni Alexander spoke of Pine Bluff "changing drivers but not the direction" of its Police Department. Jones' first act, he said, would be to evaluate the department from "top to bottom and from bottom to top," but he also remarked that he saw "officers busting their tails, doing what they need to do" during a tour of the city on Sunday.

Jones also noted a need for addressing blight and broken windows, which attract criminals. He set a goal of reducing crime by 40% to 50% in the city.

Jones acknowledged that's a lofty goal for an area that endured a stretch of six homicides in a six-day span from June 5 through Thursday, five of which occurred within the city limits. No suspects have been named in three of the shootings that occurred within a 1.3-mile radius, and a 14-year-old girl was the victim in one of them.

"Transparency is always going to be the strength of a police department and the government in general," Jones said, when asked about the crime surge in Pine Bluff. "You always have to protect the investigation to make sure you have a good, fair prosecution because the prosecution's not just fair for the police department. You want to make sure it's fair for the people considered to be suspects, and then later on [if] you find out they're not suspects, it wouldn't be fair to release those names haphazardly and them not be true suspects in the crime."

Jones' name has also surfaced in the search for a police chief in Austin, Texas, but he said Pine Bluff is where he would want to be.

"Austin is a challenge in itself," Jones said. "It's had some definitely challenging areas, as you know. Over the weekend, they had a major shooting downtown. And so it's not quite as challenging as Pine Bluff is, but it's also an excellent opportunity. As far as being in the process of that, I'm not a finalist there or been named a finalist. I've just been put on the list, that's all."

Pine Bluff, like Kingsland, has experienced a shortage of police officers in recent years. The concern was highlighted after March 1, when a 15-year-old Watson Chapel Junior High School student was shot on campus and died two days later at a Little Rock hospital. A 15-year-old classmate was charged in the killing.

Sergeant explained a week later to School Board members that school resource officers had been called back to patrol to address the staffing shortage. Pine Bluff currently has 102 full-time officers employed, and it needs 137 to be fully staffed, according to information from the Police Department.

When Council Member Steven Shaner asked Jones how he would retain staff members, Jones gave ideas about relaxing grooming rules such as cutting facial hair or covering tattoos and about offering a competitive starting salary.

"You want people from your community in your Police Department," Jones said. "You want to put as many people from Pine Bluff in police cars."

"I've been a recruiter before," George said. "We've been able to get our agency fully staffed. I'm excited to see him do that here, and I want to be a part of that."

Jones said he would like to remain in Pine Bluff for at least five years but "hopefully more," adding his ultimate goal is to teach in college. Jones holds degrees from Thomas University (Georgia), Grand Canyon University (Arizona) and Columbus (Georgia) State University, and he has also taken postgraduate classes at the University of Notre Dame, from which he donned a lapel pin Monday.

If hired, the married father of four (one grown) said, his wife and two youngest children would come to Pine Bluff after the 2021-22 school year, with the second-oldest entering her senior year of high school in August. His wife accepted a teaching contract in Kingsland. 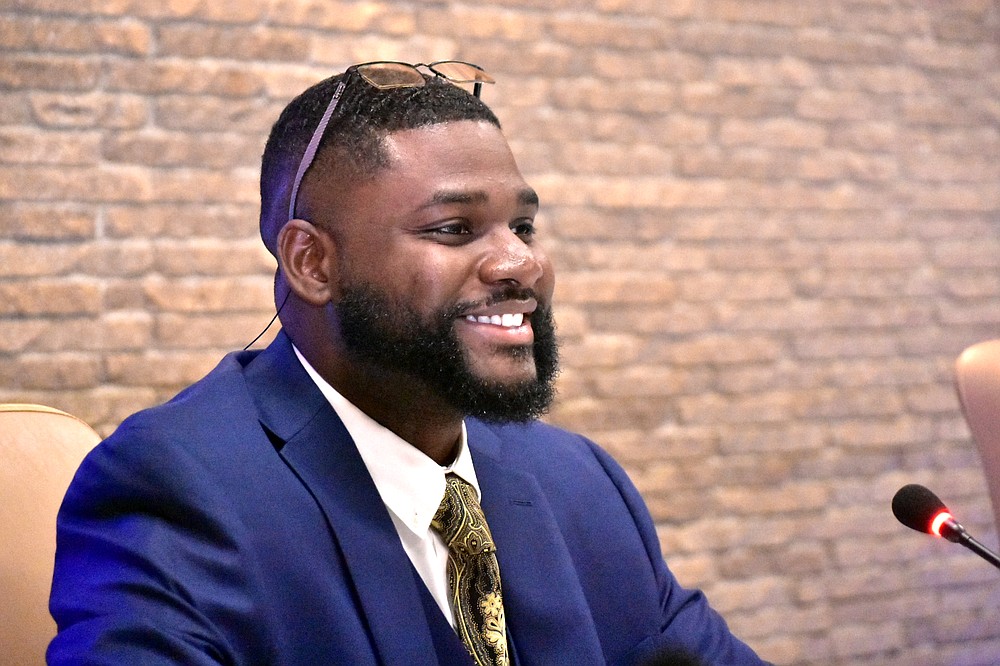