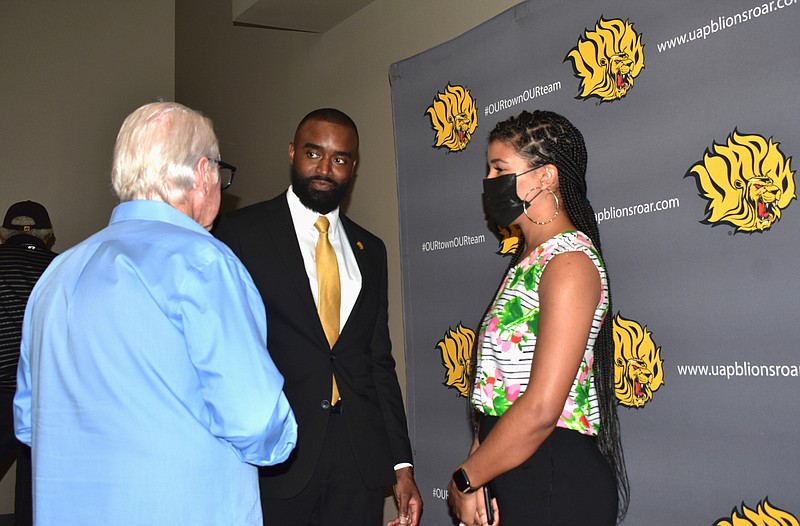 Solomon Bozeman vowed the University of Arkansas at Pine Bluff would win multiple championships with a pace-and-space offense and tough-and-gritty defense during his introductory news conference Tuesday.

Bozeman, who was born in Little Rock, got a big taste of March Madness during a Sweet 16 run as an assistant coach with Oral Roberts University. Bozeman completed his third season on Paul Mills’ staff in Tulsa.

UAPB announced Bozeman as the successor to George Ivory, who spent 13 years at the helm and led the Golden Lions to their only Southwestern Athletic Conference tournament championship as a Division I program in the 2009-10 season. That team won the NCAA opening-round game against Winthrop University.

Bozeman credited Mills with teaching him the nuances of the pace-and-space offense, which scored 81.1 points per game and produced the nation’s leading scorer in Max Abmas.

Bozeman plans to build a team that can score 80-85 points per game.

Chris Robinson, who was announced as UAPB’s athletic director a week before Bozeman was hired, revealed that Bozeman won the job over finalists Mike Bibby, a former NBA star and national championship player at the University of Arizona, and Shawn Forrest, the Golden Lions’ all-time leading scorer in the school’s Division I era (since 1997) who is now a Georgia Southern University assistant.

“One thing about [Bozeman] as a whole is the developmental aspect, developing students – definitely student-athletes, and you can see that time and time again,” Robinson said. “And his connection with the state as well, we want to help him do some things within the state, within our borders, and try to be as a great representative of the state of Arkansas and of course right here in Pine Bluff. A big tradition of athletes [rests here], and we want to get those things going again.”

Bozeman, whose father Eric has been a head coach at Henderson State and Southern Arkansas universities, admittedly went against his wife Myla’s wishes and told those in a packed STEM Conference Center meeting room there’s a reason why the word Arkansas is tattooed on his back.

“I’ve done a good job recruiting Arkansas guys, and they helped me get to where I am today,” he said, adding he landed 2016 Southland Conference Freshman of the Year Jaylen Franklin while at Abilene Christian University and recent ORU senior R.J. Glasper from the Natural State.

An official list of new signees would be released next week, Bozeman said, but one of them was apparently revealed on social media Tuesday morning.

Three Rivers College in Missouri announced Brahm Harris, a 6-foot-5, 215-pound wing from Maumelle, committed to UAPB. Harris averaged 13.6 points and 4.4 rebounds per game and shot 41.7% from the floor (36.5% from 3-point range) for the two-year college.

Bozeman said he went to work before behind hired to address the Golden Lions’ needs, having the feeling he would be the search committee’s top choice. For two months following Ivory’s resignation, the Golden Lions were faced with having to replace their leading scorer, Shaun Doss Jr., and second-leading rebounder Markedric Bell to transfer. Both earned degrees from UAPB.

“We’ve just got to work,” Bozeman said, asked about the program’s most pressing needs. “We’ve got some good guys coming back, some good kids, some tough kids. Then, we’ve got an incoming recruiting class. I’m telling you, it’s going to be a special season.”

Like many teams in the SWAC, UAPB has been known for taking its lumps against bigger-name competition in “money games” to bolster the athletic department coffers as a limited-resource institution, but Bozeman made clear he doesn’t want to settle for any blowout losses against anyone. He confirmed the Lions will play a rare nonconference home game against Arkansas State and are looking for a second opponent to host.

“We will win here, and I expect to win here,” Bozeman said. “And I’m not planning on taking two to three years. I want to get this thing done Year One.”