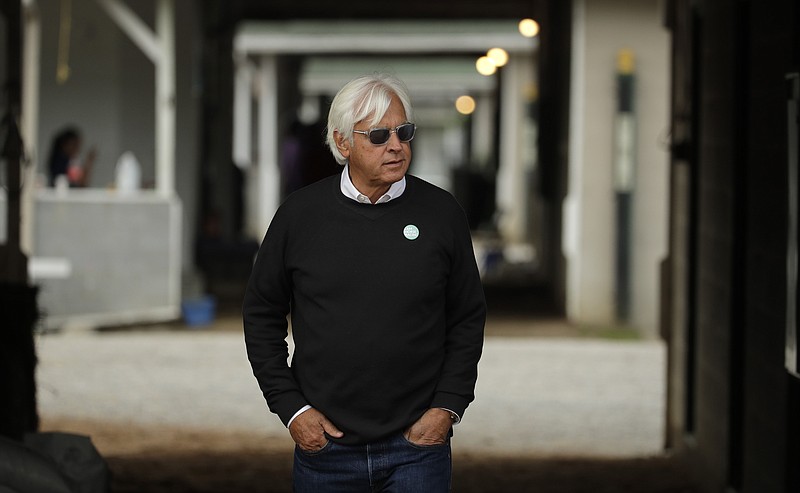 FILE - In this May 1, 2019, file photo, trainer Bob Baffert looks out from his barn before a workout at Churchill Downs in Louisville, Ky. Baffert was suspended for two years by Churchill Downs on Wednesday, Mune 2, 2021, after an additional drug test of Medina Spirit confirmed the presence of the steroid betamethasone in the Kentucky Derby winner’s system. (AP Photo/Charlie Riedel, File)

Trainer Bob Baffert sued in federal court Tuesday in an effort to get his suspension by the New York Racing Association lifted. The NYRA suspended the Hall of Famer in mid-May after Kentucky Derby winner Medina Spirit failed a postrace drug test that found 21 picograms of betamethasone. The steroid helps reduce swelling and Baffert acknowledged that Medina Spirit tested positive for the substance that is banned on race day in Kentucky. The trainer later said an ointment used to treat a skin condition contained the substance. In the filing in Brooklyn, Baffert said he was suspended without "any prior notice" by the NYRA, which did not specify "duration or terms of the suspension" and did not accuse him of violating any New York state law or regulation. The NYRA said it took the action "to protect the integrity of the sport."

The Philadelphia Eagles agreed to terms with quarterback Nick Mullens on Monday. The 26-year-old Mullens spent his first four seasons with the San Francisco 49ers, going 5-11 in 16 starts. Mullens has 4,714 yards passing, 25 touchdowns, 22 interceptions and an 87.2 passer rating. Mullens joins Jalen Hurts and Joe Flacco on Philadelphia's roster. Mullens signed with the 49ers as an undrafted free agent in 2017 after breaking Brett Favre's single-season record for yards passing and TDs as a junior at Southern Mississippi in 2015.

Patrik Schick scored both goals for the Czech Republic on Monday in a 2-0 victory over Scotland at the European Championship. Scotland lost possession when a shot toward the Czech goal was blocked and the ball fell to Schick. The Bayer Leverkusen forward looked up and spotted opposing goalkeeper David Marshall way off his line before hitting a long, curling shot that bounced into goal. Marshall gave chase, but he could only watch the ball sail into the goal before he ended up tangled in the net. Schick had earlier given the Czechs the lead in the 42nd minute with a powerful header after muscling himself between two Scotland defenders. It was an excellent finish that came from an equally outstanding cross from right back Vladimir Coufal.

Slovakia defender Milan Skriniar scored the winning goal in Slovakia's 2-1 victory over Poland. Wojciech Szczesny became the first goalkeeper to score an own-goal at the European Championship, even if he was completely blameless. The Juventus keeper was unfortunate as the ball rebounded off his near post, onto his outstretched arm and back into the net after a shot by Slovakia winger Robert Mak in the 18th minute.

Roger Federer returned to the court with a victory over qualifier Ilya Ivashka on Monday in Halle, Germany, as the Swiss player chases his 11th Halle Open title after withdrawing from the French Open to prioritize the grass-court season. Federer held serve throughout in a 7-6 (4), 7-5 win over his Belarusian opponent but didn't break until the last game of the match. Federer is now 69-7 in career matches in Halle, his favored warmup for Wimbledon. Five of his eight career Wimbledon titles have come after winning Halle the same year. Federer pulled out of the French Open after the third round last week, saying he wanted to look after his fitness after two knee operations. Also, Sebastian Korda of the United States upset sixth-seeded Roberto Bautista Agut 6-3, 7-6 (0) despite being ranked 42 places below his Spanish opponent at 52nd.

Madison Keys started her German Open campaign with a 6-3, 6-4 win over Polish qualifier Magdalena Frech on Monday. Keyes, who is ranked 28th, hit three aces and saved four of the six break points she faced. She will next face the top-seeded Aryna Sabalenka in the second round of the Wimbledon warm-up tournament. The 26-year-old Keys is going for her third singles title on grass after wins in Eastbourne in 2014 and Birmingham two years later. Another American, Amanda Anisimova, lost 6-3, 6-1 to Alize Cornet of France. Cornet next faces Canada's Bianca Andreescu. Also, Ekaterina Alexandrova defeated Anna Kalinskaya 6-3, 6-2 in an all-Russian clash to set up a second-round meeting with second-seeded Elina Svitolina.

Former Georgia guard K.D. Johnson is transferring to SEC rival Auburn. Tigers Coach Bruce Pearl said Monday that Johnson has signed a financial aid agreement to play for Auburn next season. Johnson, who averaged 13.5 points and 1.9 steals per game as a freshman at Georgia last season, will be eligible immediately and have four years remaining. The 6-1, 190-pounder played in 16 games last season after being declared eligible before the Auburn game. "Three or four years ago, Auburn may have been one of the first schools to offer K.D., and I fell in love with him because he had such a strong personality on the basketball court, he was tough, he was aggressive and he was not afraid," Pearl said. "After last season, and with us having this enormous transition of our backcourt, we were really excited about the possibility of working together. I think he will excel offensively and defensively with what we do." The Atlanta native shot 42% from the floor, including 39% from three-point range, last season. Johnson scored 21 points against Auburn in his college debut on Jan. 13, adding 7 rebounds, 4 steals, 2 assists and 2 blocks.