PREP FOOTBALL: Fayetteville’s Kittell making most of his workouts 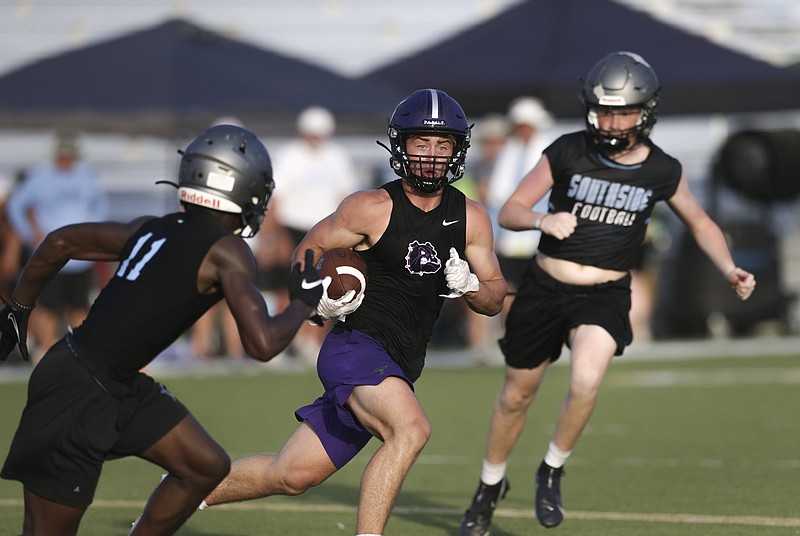 FORT SMITH -- Dylan Kittell doesn't want to waste any opportunity to get better after last summer's team workouts were restricted because of covid.

The Fayetteville wide receiver has made the most of his chances so far this summer. Kittell caught all five of Fayetteville's touchdowns in a 36-20 victory in the championship game Friday against Fort Smith Southside at the Alma 7-on-7 tournament.

He continued to turn heads Monday with his play at the Fort Smith Northside team camp that was joined by Greenwood, Fayetteville, Van Buren, Alma and McAlester (Okla.) at Mayo-Thompson Stadium.

"I want to make the most of this time out here with my teammates," Kittell said. "We've had camps, 7-on-7s and practices. It's helping make up for last year. I've grown a lot as a player and I want to show it to make this team better. I think we have the best receivers in the state, so we want to go out there and prove that."

Kittell last year finished second on the team in catches with 15 and third on the team with his 294 receiving yards. With the work and production Kittell has been able to provide in the summer, Fayetteville coach Casey Dick likes Kittell's chances to improve vastly on those numbers.

"He is really, really crafty," Dick said. "He approaches every single day with an outstanding work ethic. He is just a guy that never runs out of energy. He has a lot of similarities to (former all-state Fayetteville wide receiver) Connor Flannigan with how he runs routes and his build. Dylan does a great job with everything we ask him to do."

The Bulldogs' receiving core is led by Isaiah Sategna, who is committed to Texas A&M and is considered by some the top prospect in the state. He had 41 catches for 819 yards and seven touchdowns last fall. But the depth with Kittell, Hayes Robinson, Kaylon Morris and Omar Murray has given the offense high hopes after averaging 24 points per game last season.

"We know we are good and can be good," Kittell said. "We just got to go out there and show it. We believe it. We just need to show it now. I want my production to go up so I can help this team make a run for a state title."

Kittell, who will be a senior next season, is a player the coaching staff relies upon to show younger players how things are done. Dick said Kittell does it all for the Bulldogs when he is on and off the field.

"He is just a great athlete and leads by example with what to do every single time," Dick said. "He does the right thing when we are practicing or just watching film. I love his daily approach. We need 148 other guys like him and the world would be a better place."

Northside coach Mike Falleur said it was a joy hosting the camp after teams weren't able to attend these types of events a summer ago. He was pleased with the competition level he was able to get to come to Northside for all programs to get better during the more than two-hour event.

"With covid last year, it's awesome we get to do this again," Falleur said. "We like being able to host this for the local teams around. Everybody is out here getting ready. Hopefully we've done a decent job at this thing. We want teams out here getting better."

Falleur has gotten a pretty good look at his squad with this being the third team camp the Grizzlies have been a part of along with being at the 7-on-7 tournament in Alma.

"I like where we are right now," Falleur said. "This is giving us a great look at our team. I have been very proud of our defensive line, which was young, and the offensive line getting better. We wanted to see progress in those two spots, and we have. We aren't there yet, but we like what we have seen. Those position groups need to play well if we are going to make progress in the fall."

All programs in attendance at the team camp were coming off the marathon Alma 7-on-7 tournament Friday that lasted more than 10 hours for some teams that made deep runs.

Greenwood lost in the first round but was happy to be at Monday's team camp ready to bounce back, said coach Chris Young.

"We are glad to be out here at a team camp getting better," Young said. "We are a little new to 7-on-7s because we haven't been to those as much recently. We believe at Greenwood these camps really get you ready for what you are going to do in the fall. We gained some things from the 7-on-7, but we really like these team settings. We feel like we got better being out here against some good teams."

Young said he liked the progress he saw from his team Monday. The Bulldogs are working on finding the right pieces to the puzzle coming off the program's 10th state title last fall. About nine players are competing for four receiver spots with the secondary rotating a lot of skilled position players as well.

After getting a lot of reps last Friday at the 7-on-7 and seeing plenty of snaps Monday, Young said he has enjoyed watching the progress of Hunter Houston, who the team is breaking in at quarterback as the new starter. Houston was a backup last year but started a regular-season game and also played the role of hero filling in during a playoff victory.

"I love the progress he has made," Young said. "But he has been a little inconsistent. He makes a really good throw then he might miss a throw on the next chance. We want to get four yards a play, so we need to work on being consistent. He is getting better out here and has a chance to be a great football player. We love what we see from him out here because we see the progress."

This was the first team camp of the year for Van Buren. With a young group seeing its first varsity action against other teams, missed assignments naturally will happen. Other miscues will happen as well. But the thing coach Crosby Tuck liked the most was the progress the team made catching up to the speed of the game.

"We have a lot of youth out here whether that is age or experience level," Tuck said. "We are trying to figure out varsity speed right now. That's why we do these camps. We are adjusting to the speed so our guys are ready to go. We need to get these young guys ready to go. In our first half of this journey, we need to pick up our energy.

"I think we are a little surprised at the game speed. With the exception of about five guys out here, it is a new speed for them."

Tuck said he was glad to have quarterback Connor Brady back Monday after he was away from the team when it was at the 7-on-7 tournament in Alma. Bryce Perkins filled in most of that day at quarterback for the Pointers. Tuck said having Brady back made a difference at the team camp.

"It's nice to have him back because he is a big part of what we do," Tuck said. "His presence is even just a big part of it. He is a guy that is a senior and people look up to him. I'm very happy to have him out here competing in that quarterback spot today."

The trend all offseason for Alma has been to play up to bigger competition. That continued Monday. What also continued was the sharp level of play from the Airedales.

Alma coach Rusty Bush, who spent many years coaching at Northside, liked what he saw from his team despite being the smallest school at the team camp.

"We just wanted to stay steady out here and we've had a really good day," Bush said. "Our kids have really stepped up. We are missing four starting linemen for just various reasons. We got some young guys playing and we are building depth. We are throwing it and catching it better. And I think we've been steady on defense all summer."

Alma got a really good look at transfer quarterback Joe Trusty last Friday during the 7-on-7 tournament. Hunter McAlister, who is also competing for the job, hurt his ankle in basketball practice and was held out. That allowed Trusty to get all of the snaps Friday.

McAlister was back Monday at the signal-caller position but was a little limited in his movement.

"We saw some really good things from him that we already knew," Bush said of Trusty. "He has really good velocity on the football. He is very football savvy. Right now he is behind just because he doesn't know the system because he came in during January. But he has been working hard. McAlister was able to do some work out here as well. We are glad to see progress from those guys and all our players out here."