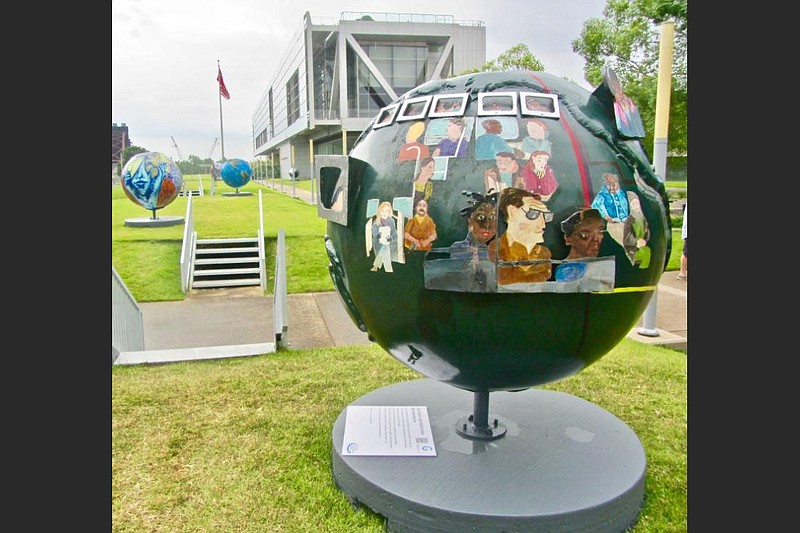 Dotted like colorful mini-planets on the grounds of the William J. Clinton Presidential Center and Park are 26 whimsical spheres. They make up the complex's first exhibition since covid-19 forced nationwide closings of attractions 15 months ago.

While the Clinton Presidential Center's interior remains shut until July 1, "Cool Globes: Hot Ideas for a Cooler Planet" is scattered on the site's grounds. The visiting show presents a save-our-environment message via playful models of Earth in a panoply of guises and disguises.

"Cool Globes" has landed in Little Rock with an international reputation built since its debut in Chicago in 2007. Versions of the exhibit have appeared across the United States, as well as cities in Canada, Brazil, the Netherlands, Switzerland, Denmark, France and Israel.

Environmental activist Wendy Abrams has explained her founding of "Cool Globes," which stemmed from the 2005 Clinton Global Initiative project:

"I was intrigued by the question of how to capture the public's attention on a subject as complex as global warming. One night, friends and I came up with an idea — 'public art with a purpose.' The idea was to put sculptures on the sidewalk, each depicting a solution to global warming, forcing people to confront the issue, but in a nonthreatening manner."

The closest thing to a threat in the Clinton Center exhibit is the tormented face from Edvard Munch's iconic "The Scream," on the globe painted by Nancy L. Steinmeyer. Its information panel declares: "First we scream, then we act." The scary artwork "might represent the planet calling out for help." But "before you can help confront climate change, it's important to get educated on the issues."

Pants and bras and other attire decorate the globe from Thom Cicchelli titled "Drawing the Line on Climate Change." The display, labeled "Green your laundry," points out that "for drying, hanging clothes is ideal because a dryer uses more energy than virtually any other home appliance."

Lakresha Diaz, one of four Arkansas artists who created works for the show, has sculpted an oversize honeybee perched where the globe's North Pole would be. Titled "Earth: The Nectar of Life," the work comes with a reminder that "one out of every three bites of food in the United States depends on honeybees and other pollinators."

The Clinton Center's web posting about the exhibit cites the 42nd president's "commitment to environmental stewardship and addressing climate change began during his administration and continues today, through the work of the Clinton Foundation."

The site asserts that Clinton's administration "helped write and signed the Kyoto Protocol on Climate Change; adopted the most stringent policies in our nation's history to reduce air pollution and greenhouse gas emissions; established the Roadless Rule to safeguard 58.5 million acres of heritage forests and protect the last remaining undisturbed landscapes; and proposed funding and tax incentives to spur energy efficiency."

While strolling among the "Cool Globes," visitors may speculate on how much of an impact those efforts have had in the 20 years since Clinton left the White House. The hortatory messages conveyed by the artworks, even with their whimsy, suggest that the health of our planet remains dangerously imperiled.

The grounds of the Clinton Presidential Center, 1200 President Clinton Ave., Little Rock, are open daily free of charge. For information on the outdoor exhibit, visit coolglobes.org.