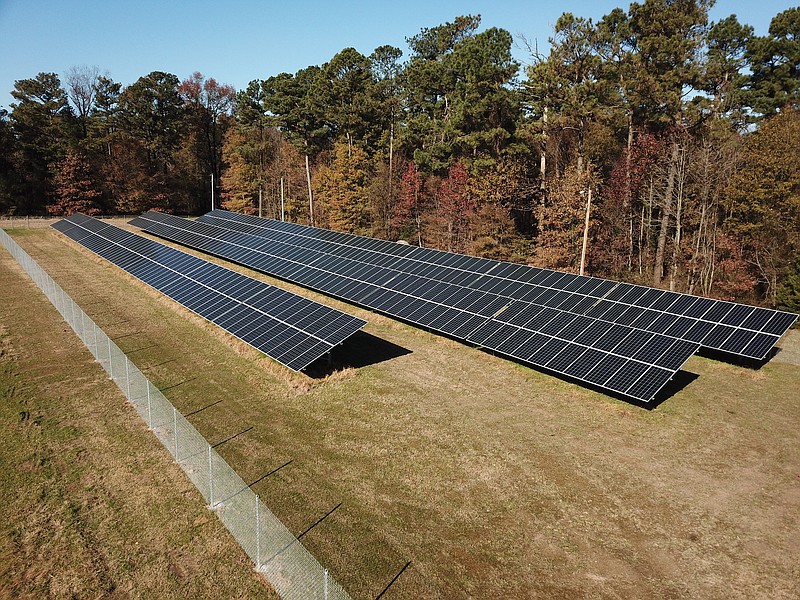 Banks of solar panels are set up as part of the Boyd farm installation in Cleveland County in this file photo. (Special to The Commercial/Stephen Boyd, University of Arkansas System Division of Agriculture)

Use of solar energy, net metering and grants from the U.S. Department of Agriculture have shown significant benefits for a Cleveland County poultry grower, said Yi Liang, associate professor-biological and agricultural engineering.

"Poultry farming is an energy-intensive business, with gas and electricity as major expenses," said Liang, who works as part of the Center of Excellence for Poultry Science.

Liang looked at results from a solar installation by Stephen Boyd, who operates a six-broiler farm in Cleveland County. The farm has been growing throughout its 10 years in operation, with varying sized houses built in different years.

"One thing in common between houses is that electricity consumption increased dramatically over the years," Liang said. "This increased electric demand is due to cooling requirements for modern broilers raised to heavy weights due to market demand."

Liang said Arkansas provides an advantage for those who produce their own energy through its "net metering" policy in which excess electricity generated by a consumer can be credited and applied during periods of peak electricity usage.

The decision to go solar wasn't made impulsively, Boyd said. His interest was piqued when he picked up some information from a vendor at an Arkansas Farm Bureau convention. The following year, there were more vendors, more information and more interest.

Then in 2020, he decided it was time to get some bids. Delta Solar of Little Rock won the contract.

"I wanted to be energy independent and be a good steward of natural resources," Boyd said. "It was pretty expensive, but I was able to apply for a REAP grant and use the tax benefits that go with the system. It just made sense to me."

The Boyd Family Farm had 460 solar panels installed on less than one acre of land and went online "right around Thanksgiving and I think the first full month was December," Boyd said. "It didn't produce a tremendous amount of energy in that month, due to the day length."

However, "since that first month, I have not paid for more than the minimum for any bill," he said. "My biggest bill for five meters combined was $104 and change."

The system is expected to save $25,000 a year on electricity bills.

And while installing solar isn't cheap, being able to use a USDA REAP grant and tax incentives will help Boyd to recoup his costs within two to four years.

"Under the Arkansas net-metering rules, any power that is put back onto the electric grid is credited against your other meters on a "1-to-1" basis," said Doug Hutchings, chief executive officer of Delta Solar. "This means that the energy you produce is valued at exactly what you would be paying for it. Note that farms, as commercial entities, will be paying less for power than residential users so it is critical to accurately model the true electric rate that a farmer is paying to accurately model the long-term savings."

"The investment in solar is making financial sense now and adds tremendous values to his own farm business, no matter whether he sells the farm several years from now, or passes it along to the next generations," Liang said. "A solar energy system has become more competitive due to the continuous drop of system prices and improvement on energy conversion efficiency, with additional benefits to reduce greenhouse gases."

Although his initial investment wasn't inexpensive, Boyd believes the system adds value to the farm and any future buyer of the farm will have the energy savings to look forward to.

In addition to solar, Boyd made other changes on his farm, changing to LED lights and tube heating throughout the poultry houses to increase efficiency of gas and electricity.

Hutchings said there are important considerations for an agriculture operation that wants to go solar.

"Farms can have complicated ownership structures with electric meters spanning multiple farming entities," he said. "Policy in Arkansas enables you to build a central solar array behind a single meter and use it to offset unlimited additional meters, but they have to be under 'common ownership.'"

"Typically, you will need to upgrade the transformers or install new utility infrastructure to accommodate a solar array that is offsetting multiple meters," he said.

"Talking with the utility early on in the process is critical to making sure that the local grid can handle the solar generated electricity in times when it is producing more than you consume," Hutchings said. "This is particularly important for seasonal users like grain bins or poultry producers who have periods of high usage followed by lower usage."

"As a rule of thumb, you are looking at somewhere between three to five acres of land per megawatt of solar panels," Hutchings said. "It is highly site dependent with an ideal location having flat ground with no shading from trees or buildings and no rocks is a big plus.

"Farms that often check all of these boxes and make an ideal site to deploy solar," he said. "The intersection of solar and agriculture is really interesting in Arkansas at the moment. Most people think solar is expensive and only done for environmental reasons, but we are regularly seeing projects provide 10[%] to 18% internal rates of return and produce upwards of $20,000 per acre in value from electric cost offset."

Boyd said a group of growers like himself were meeting once a month, until the pandemic started.

"We talked about a range of things in our industry, including what we did to set the houses up and they were very interested," he said. "I'm trying to get the group back together and get them back looking at it." 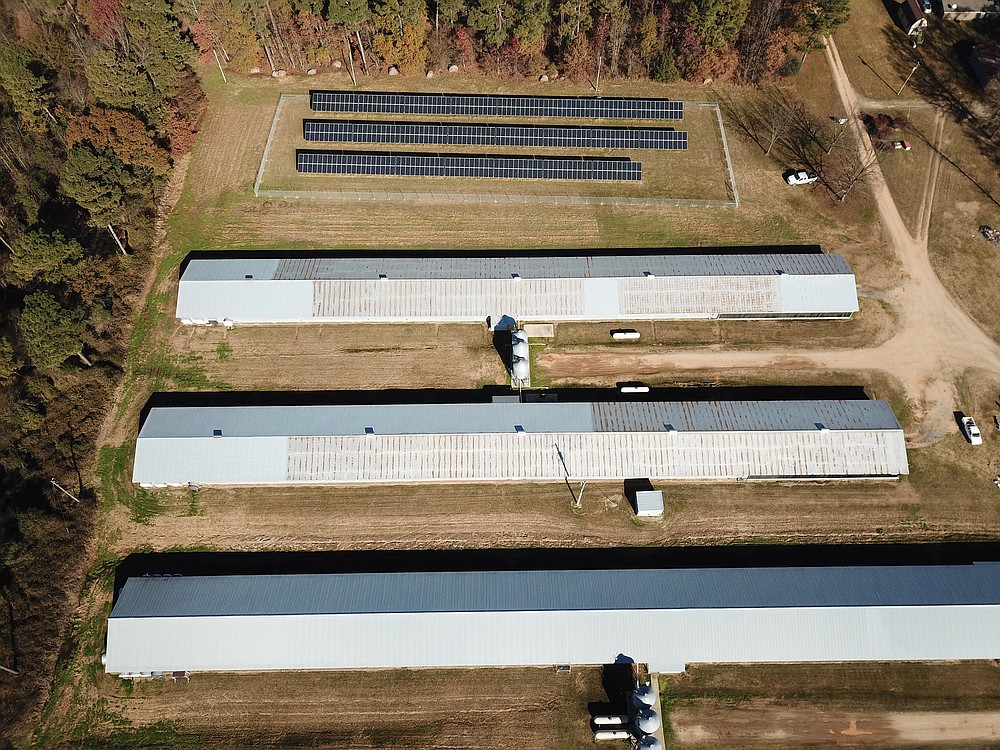