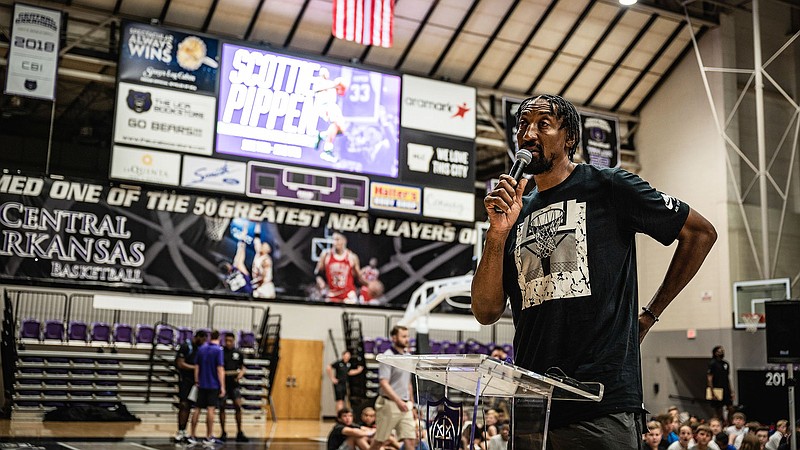 CONWAY -- Standing on the Farris Center court that now bears his name, Scottie Pippen spoke through tears Monday morning. It's been a challenging spring for the six-time NBA champion and former University of Central Arkansas star.

In April, Pippen announced in an Instagram post that Antron, the oldest of his seven children, had passed away at 33 years old. Weeks later came the news that Don Dyer -- Pippen's formative former coach who won 285 games with the Bears from 1979-93 -- had died at the age of 87.

The weight of those losses came with him to Conway, and his eyes welled when he grabbed a microphone and stepped forward onto the hardwood surface known as of Monday as "Scottie Pippen Court."

"It's been a tough couple of weeks for me," Pippen said, fighting the emotions. "It's not just about the court. It's about some people that I've lost along the way. Coach Dyer. My son. So it's tough.

"But this means a lot. The hard work that I've put in over the years and my dedication to the game. This just gives me an opportunity to leave a legacy behind."

[Video not showing up above? Click here to watch » https://www.youtube.com/watch?v=6zkgw3CED_8]

UCA opened the 2021 Scottie Pippen Basketball Camp by unveiling the court emblazoned with Pippen's name and signature in a ceremony that included Gov. Asa Hutchinson, men's basketball Coach Anthony Boone, Athletic Director Brad Teague and university President Houston Davis. Seated for the ceremony were the 180 campers who arrived for the first session of the four-day basketball camp for boys and girls between the second and 12th grades.

It was a moment months in the making. The school chose to dedicate the court to Pippen earlier this spring as part of a larger makeover inside Farris Center. Along with the addition of Pippen's name in purple writing, the court's Southland Conference logos have been replaced by those of the Atlantic Sun Conference, the Bears' new home as of June 30.

But Monday was centered on the seven-time NBA All-Star and Basketball Hall of Famer and what he still represents on campus.

"When our students and our student-athletes walk into this gym and they see [Pippen's] name on the floor, they'll understand the history and legacy of Scottie," Davis said. "They're going to be inspired to become that much more because of his resilience and resolve."

The ceremony began with remarks from Teague and Davis, followed by Hutchinson, who spoke of the privilege it was to meet Pippen and the pride he felt in the accomplishments of the native Arkansan.

Before Pippen's turn to speak, a video came across the scoreboard chronicling his career -- starting from his beginnings in Hamburg, then on to Conway where he started as a walk-on student manager before rising to become a two-time NAIA All-American and No. 5 overall draft pick in 1987. That all preceded a 17-year professional career that included NBA titles alongside Michael Jordan in Chicago, a collection of All-NBA honors and a pair of Olympic gold medals.

When the lights came on, the black cloth covering Pippen's swooping signature was removed and he spoke about the honor of seeing his name on the floor of the Farris Center.

"It's a great feeling," he said. "It's nothing that I set out to do. You dream of playing the game and being the best at it. To be able to have other people look upon your game and what you've done over your career is special to be honored this way. I'm truly grateful."

Pippen's eyes watered again when his mind returned to his time in Conway and the instrumental figures who pushed him forward. He battled tears while thanking Donald Wayne, the high school coach who brought him to UCA, then Arch Jones, a former assistant under Dyer during Pippen's collegiate career who later became the school's head coach and athletic director.

When his speech turned back to Dyer, Pippen paused, collected himself and looked straight ahead as he extended gratitude to the coach and school who took a chance on him and helped his basketball career take flight.

"The University of Central Arkansas has been the guide in my life. This is my family."