FILE - In this Feb.14, 2019 file photo, an Airbus A380, left, and a Boeing 747, both from Lufthansa airline pass each other at the airport in Frankfurt, Germany. The United States and the European Union on Tuesday appeared close to clinching a deal to end a damaging dispute over subsidies to Airbus and Boeing and lift billions of dollars in punitive tariffs. (AP Photo/Michael Probst, File)

BRUSSELS -- The deal the United States and the European Union reached Tuesday to end their long-running rift over subsidies to Boeing and Airbus will suspend billions in punitive tariffs. It will ease trans-Atlantic tensions. And it will let the two sides focus on a common economic threat: China.

But the breakthrough still leaves some trade friction between the U.S. and the EU unresolved. Most prominent, President Joe Biden kept in place import taxes that President Donald Trump imposed on European steel and aluminum, a move that infuriated some of America's closet allies three years ago.

For now, Tuesday's truce in the Boeing-Airbus dispute goes a long way toward repairing a huge commercial relationship -- $933 billion in two-way trade last year despite the pandemic -- that came under enormous strain during the Trump years. Among other things, the former president angrily charged the Europeans with using unfair trade practices to sell more products to the United States than they bought and of shirking their responsibility to pay for their own national defense.

No trade dispute between the two sides has raged longer than their aviation conflict. Since 2004, the U.S. and the EU have accused each other of unfairly subsidizing their aircraft-building giants -- America's Boeing and Europe's Airbus. Over the past two years, the World Trade Organization, which adjudicates such disputes, declared both sides guilty. It allowed the United States to impose up to $7.5 billion in tariffs and the EU up to $4 billion worth.

The duties victimized companies that have nothing to do with aircraft production, from French winemakers and German cookie bakers in Europe to spirits producers in the United States, among many others. Tuesday's agreement brought a measure of relief to companies on both sides of the Atlantic.

"For about 20 years, we have been at each other's throat," U.S. Trade Representative Katherine Tai said. "We have been too busy fighting each other."

In March, weeks after Biden took office, the two sides agreed to suspend the tariffs. That suspension, which took effect March 11, was to last for four months. The agreement announced Tuesday will take effect July 11 and will put the tariffs on hold for five years.

"It's obviously a good sign -- they agreed to something," said William Reinsch, a former U.S. trade official who is now an analyst at the Center for Strategic and International Studies.

The truce, he said, will add "an element of certainty and sanity" to trans-Atlantic trade.

But Reinsch notes that the two sides "kind of kicked the can down the road" by leaving unsettled some issues in the aircraft dispute, such as whether Airbus must repay the government subsidies it received over the years. Instead, the U.S. said in a fact sheet, the two sides had agreed to establish a group "to analyze and overcome any disagreements that may arise."

The deal might help solidify the duopoly of Airbus and Boeing, which together dominate the global market for airline jets. Both companies have struggled recently with declining orders and deliveries at a time when the pandemic devastated air travel and led airlines to cancel or delay purchases.

Tuesday's agreement made clear that the United States and the EU recognize that Boeing and Airbus face an external threat far bigger than each other: As part of its aggressive drive to become the world's dominant industrial power, China is intent on developing its own plane-making industry with heavy government support.

"It will be a classic Chinese game plan," Reinsch said. The government in Beijing will "force all the Chinese airlines to buy theirs. They'll create a market. Their planes will get better, and once they've gotten better and cheaper, they'll start flooding the global market."

The U.S. and EU have agreed to work together to counter Beijing's efforts to obtain foreign aviation technology. They plan to take joint action against unfair trade practices that appear intended to give Chinese plane manufacturers unfair advantages.

Richard Aboulafia, an aerospace analyst with Teal Group, suggested the agreement will help the U.S. and Europe pivot to present a united front against China. He noted that Chinese airlines delayed deliveries from Boeing and Airbus during the pandemic but continued to take deliveries from China's own manufacturer, Commercial Aircraft Corp. of China.

"The Chinese want to close their market and go their own way, and the biggest export market on the planet for Airbus and Boeing just goes away," Aboulafia said.

The U.S.-EU agreement won't stop China from doing that, he predicted, "but at least they can prevent a scenario where China divides the West and plays the U.S. and its allies off against each other."

In another sign of a trans-Atlantic reconciliation, the Group of Seven wealthy countries, including France, Germany, Italy and the United Kingdom, agreed this month to a Biden administration proposal for a 15% global minimum tax on the earnings of multinational corporations.

The idea is still a long way from taking effect. But a global corporate tax could potentially resolve another dispute between Washington and Europe: Several European countries, frustrated that big tech companies are so deft at avoiding taxes, have imposed digital services taxes aimed at American companies such as Google and Apple.

Calling the taxes unfair, the U.S. has prepared tariffs in retaliation. But a global tax rate that hits a broader range of multinationals could defuse the issue by raising tax revenue without discriminating against U.S. companies.

Information for this article was contributed by Samuel Petrequin, Jamey Keaten and David Koenig of The Associated Press. 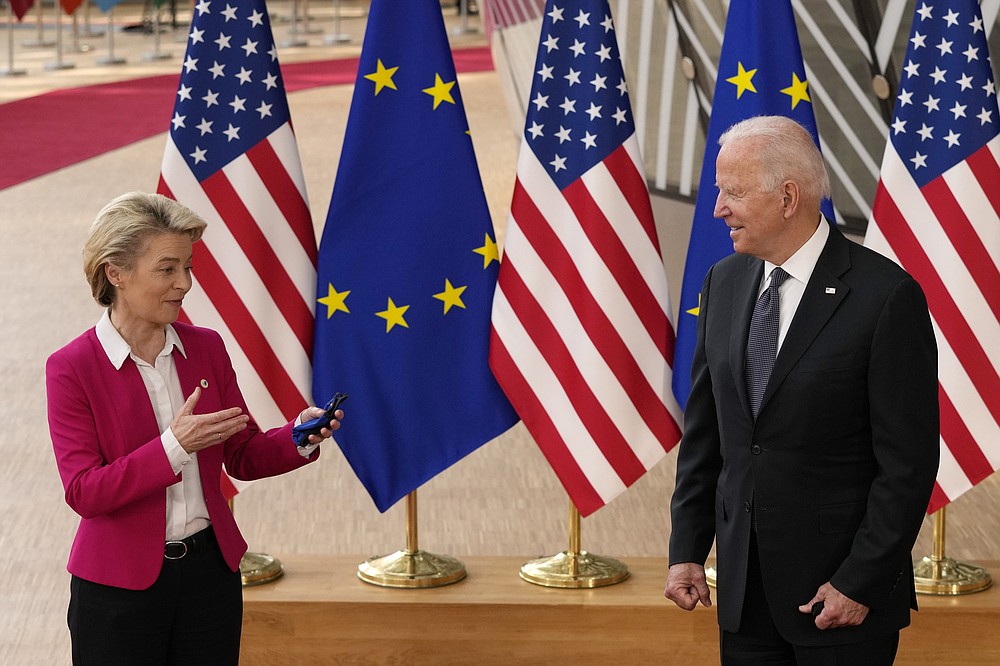 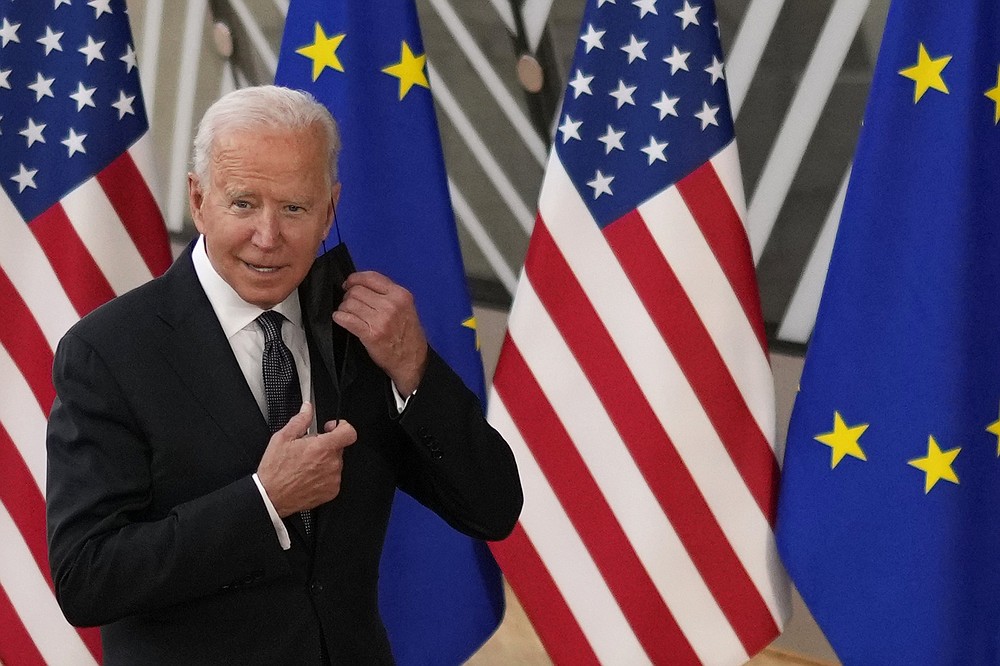 U.S. President Joe Biden takes off his protective facemask prior to speaking with the media during arrival for the EU-US summit at the European Council building in Brussels, Tuesday, June 15, 2021. (AP Photo/Francisco Seco) 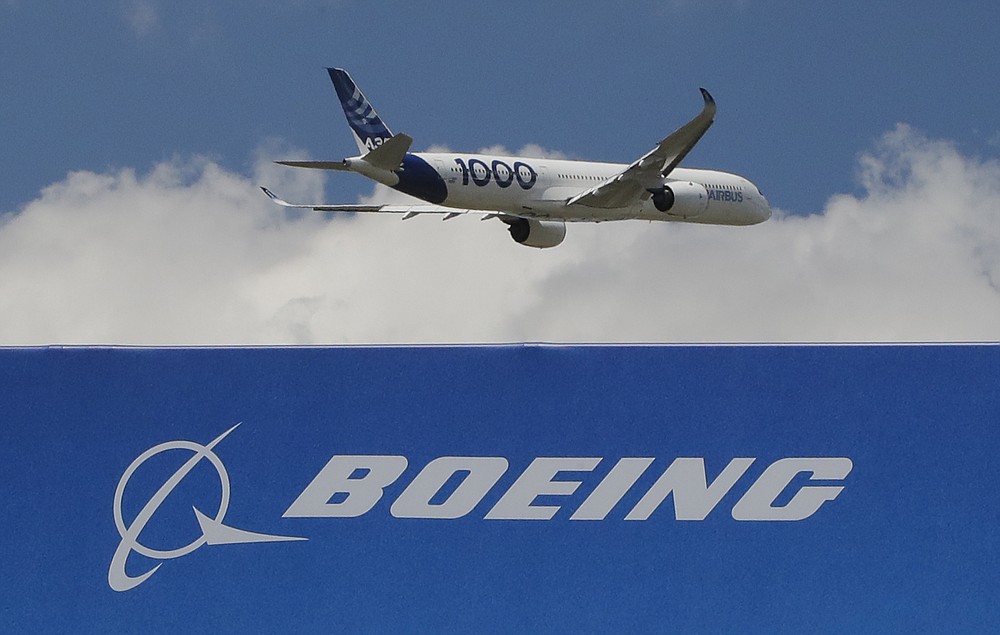 FILE - In this June 17, 2019, file photo, an Airbus A 350 - 1000 performs a demonstration flight at Paris Air Show in Le Bourget, east of Paris, France. The United States and the European Union on Tuesday appeared close to clinching a deal to end a damaging dispute over subsidies to Airbus and Boeing and lift billions of dollars in punitive tariffs. (AP Photo/Michel Euler, FILE) 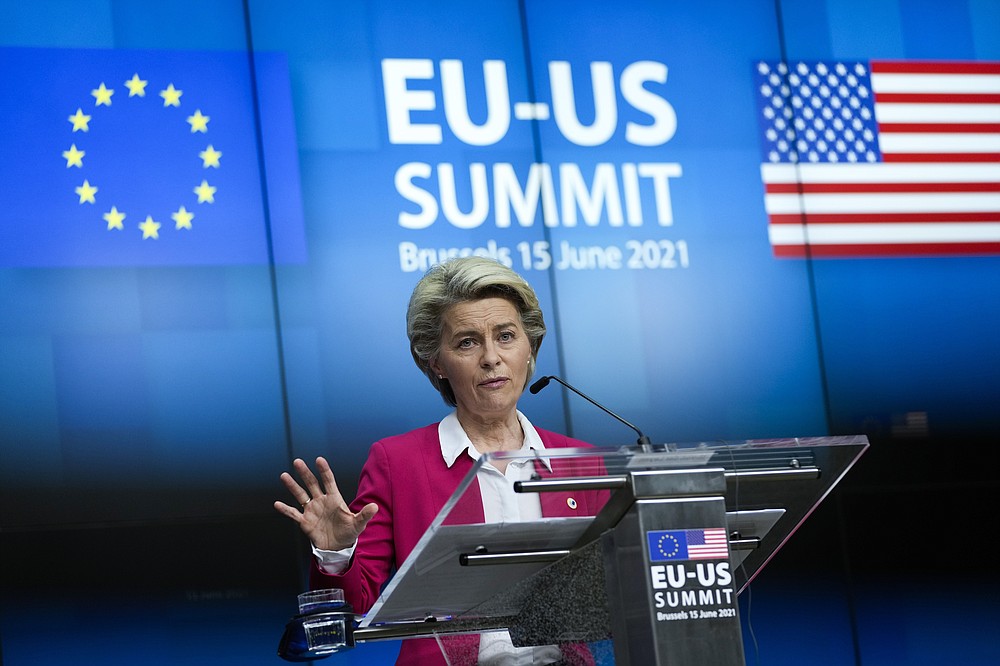