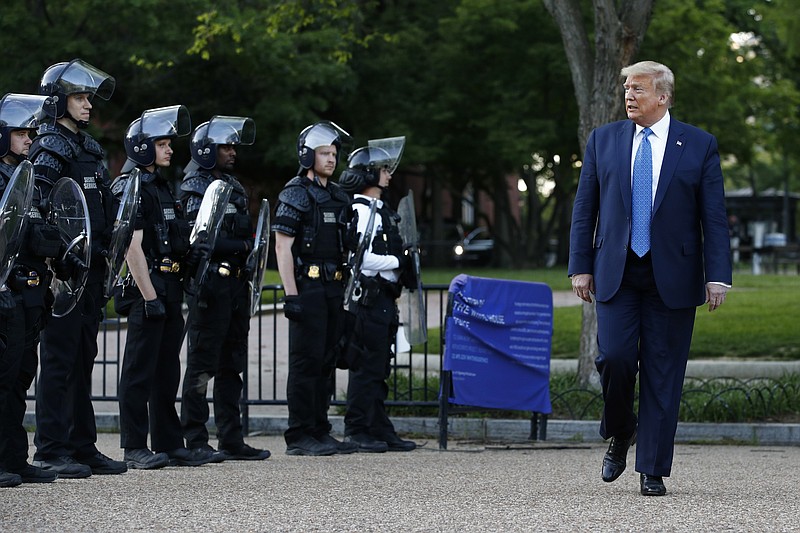 FILE - In this June 1, 2020 file photo, President Donald Trump walks past police in Lafayette Park after visiting outside St. John's Church across from the White House in Washington. An internal investigation has determined that the decision to clear racial justice protestors from an area in front of the White House last summer was not influenced by then-President Donald Trump’s plans for a photo opportunity at that spot. The report released Wednesday by the Department of Interior’s Inspector General concludes that the protestors were cleared by U.S. Park Police on June 1 of last year so new fencing could be installed. (AP Photo/Patrick Semansky)

WASHINGTON -- During the last weeks of his presidency, Donald Trump and his allies pressured the Justice Department to investigate unsubstantiated claims of widespread 2020 election fraud that even his former attorney general declared were without evidence, newly released emails show.

The emails, released Tuesday by the House Oversight Committee, reveal in new detail how Trump, his White House chief of staff and other allies pressured members of the U.S. government to challenge the 2020 election over false claims.

[Video not showing up above? Click here to watch » https://www.youtube.com/watch?v=jEFAcwBTgIw]

Officials at the Department of Homeland Security and the Justice Department, as well as Republican election leaders across the country, have repeatedly said there was no pervasive fraud. Former Attorney General William Barr, a longtime Trump loyalist, was among those who said there was no evidence of such fraud.

The emails also show the extent to which Trump worked to enlist then-acting Attorney General Jeffrey Rosen in his campaign's failing legal efforts to challenge the election result, including suggesting that Rosen file a brief with the U.S. Supreme Court.

Emails sent to Rosen include debunked conspiracy theories and claims of voter fraud. Trump repeated his claims about the election to the mob that stormed the U.S. Capitol on Jan. 6 in a failed effort to stop the certification of Joe Biden's victory.

Rosen on Tuesday did not respond to messages seeking comment. A spokesman for Trump did not immediately respond to requests for comment.

The documents "show that President Trump tried to corrupt our nation's chief law enforcement agency in a brazen attempt to overturn an election that he lost," said Rep. Carolyn Maloney, D-N.Y., chairwoman of the House Oversight Committee.

Maloney, whose committee is looking into the events leading up to the storming of the Capitol, said she has asked former Trump administration officials to sit for interviews. The House Oversight Committee requested the documents in May as part of the inquiry, and the Justice Department complied.

Meadows tried to have Rosen investigate the conspiracy theories and pushed for the acting attorney general to meet with an ally of Trump lawyer Rudy Giuliani, who was pitching the unfounded election conspiracies that Italy was using satellites and military technology to change votes.

After Rosen forwarded Meadows' email, Rich Donoghue, the acting deputy attorney general, sent a note to Rosen that said, "pure insanity." Rosen wrote back that he was asked to have the FBI meet with Giuliani's associate and that he said no, insisting the man could follow the FBI's normal protocol for tips by calling the public tip line or taking his information to an FBI field office. But Rosen said Giuliani was "insulted" by the answer.

"Asked if I would reconsider, I flatly refused, said I would not be giving any special treatment to Giuliani or any of his 'witnesses,' and re-affirmed yet again that I will not talk to Giuliani about any of this," Rosen wrote.

On Dec. 14, the day when Electoral College votes were certified and when Barr said he would be resigning later that month, a White House assistant sent a note to Rosen with the subject "From POTUS," the acronym for president of the United States. The email to Rosen, a deputy attorney general who became acting attorney general after Barr left, included talking points on alleged voter fraud in Antrim County in Michigan, a key battleground state. Those included claims such as "a Cover-up is Happening regarding voting machines in Michigan" and "Michigan cannot certify for Biden."

The files included a so-called forensic analysis of the Dominion Voting machines the county employed, alleging they were "intentionally and purposefully" calibrated to create fraudulent results.

"It's indicative of what the machines can and did do to move votes," the documents said. "We believe it has happened everywhere."

Moments after the Trump assistant sent the documents, Donoghue sent the same documents to the U.S. attorneys in the Eastern and Western districts of Michigan.

The claims were based on a report compiled by Allied Security Operations Group, a company led by a Republican businessman who pushed allegations that the 2020 election was stolen.

Trump and his allies were focused on Antrim County because of an error not long after polls closed that caused the county to briefly report that Biden was leading Trump in the heavily Republican area. Election officials quickly established that the issue was caused by human error, saying a clerk's failure to update software just before the election was responsible for the incorrect tally, which was rapidly updated to reflect Trump's victory.

Still, an area resident filed suit, and a judge in early December ordered that Allied Security Operations be given access to the county's voting machines to analyze on the resident's behalf.

Allied Security Operations, based in Texas, produced the report that asserted a vast conspiracy to rig the election. But an expert analysis of the report conducted on behalf of Michigan's attorney general and secretary of state -- as well as multiple reviews by other experts in recent months -- found the group's work was riddled with inaccuracies. A subsequent hand recount of Antrim County's ballots confirmed the voting machines had tabulated results correctly.

The campaign to have Rosen take up Trump's cause accelerated once he was appointed acting attorney general, according to the emails the committee disclosed.

On Dec. 29, Trump assistant Molly Michael emailed Rosen, Donoghue and then-acting Solicitor General Jeffrey Wall and included a draft legal brief for the Supreme Court, with a phone number where they could contact the president directly. The proposed complaint asked the court to "declare that the Electoral College votes cast" in the six battleground states that Trump lost "cannot be counted." It asked for the court to order a special election in those states.

Earlier that month, the Supreme Court had thrown out an effort by Texas to sue Georgia, Michigan, Pennsylvania and Wisconsin over how they conducted their elections, with the court asserting that Texas had not shown a legal interest "in the manner in which another state conducts its elections." The brief sent by Michael would have essentially had the U.S. government take Texas' place and would have added challenges to the votes in Arizona and Nevada.

To try to prove its case, the draft legal brief relied on descriptions of an election monitoring video that appeared similar to one that Republican officials in Georgia rejected as doctored, as well as the debunked notion, promoted by Trump, that machines made by Dominion had been hacked.

After Michael's message, a lawyer named Kurt Olsen, who had represented Texas, emailed senior Justice Department officials, urging them to file the complaint. The emails show he repeatedly called Rosen's senior advisers and others in the Justice Department to demand meetings, saying he was driving from Maryland to Justice Department headquarters in Washington to meet with Rosen because he couldn't reach him.

"As I said on our call, the President of the United States has seen this complaint, and he directed me last night to brief AG Rosen in person today and discuss bringing this action," he wrote in one email. "I have been instructed to report back to the President this afternoon after this meeting."

A person familiar with the matter, who spoke on condition of anonymity to describe the interactions, said a meeting never happened but that Olsen somehow got Rosen's private cellphone number, and Rosen picked up after he got a call from an unknown number. The person said Rosen gave Olsen a polite "brush-off."

The Associated Press reported late last year on the effort within the Trump administration to pressure government employees to adopt the narrative of 2020 election fraud. Trump asked the Justice Department to investigate allegations of voter fraud, and department leaders sent a memo to the states to prioritize the effort. Trump also asked that a special prosecutor be named to investigate the voter fraud claims.

Trump considered replacing Rosen with a more loyal ally, Jeffrey Clark, and even looked into whether the White House could appoint a special counsel without the Justice Department's approval. On Jan. 1, Meadows asked Rosen to have Clark investigate "signature match anomalies in Fulton county, GA."

It didn't happen, and on Jan. 3, another Justice Department official wrote that the "cause of justice won."

Three days later, hundreds of pro-Trump rioters broke into the Capitol, attacking police and sending lawmakers fleeing. At least 400 people have been arrested in connection with the riot, the largest Justice Department prosecution in history.

Rosen is in the process of negotiating to give a single interview to investigators from the House Oversight Committee, the Senate Judiciary Committee and others looking into the final days of the Trump administration. He has asked the Justice Department's current leaders to sort what he can and cannot say about the core facts that involve meetings at the Oval Office with Trump, which could be privileged, according to a person briefed on the matter.

Rosen met with department officials and spoke with Trump's representatives within the past week to discuss these issues, the person said. If the parties cannot come to an agreement, then the issue could be thrown into court.

Information for this article was contributed by Michael Balsamo and Colleen Long of The Associated Press; by Katie Benner of The New York Times; and by Karoun Demirjian, Matt Zapotosky, Amy Gardner, Rosalind S. Helderman and Josh Dawsey of The Washington Post.