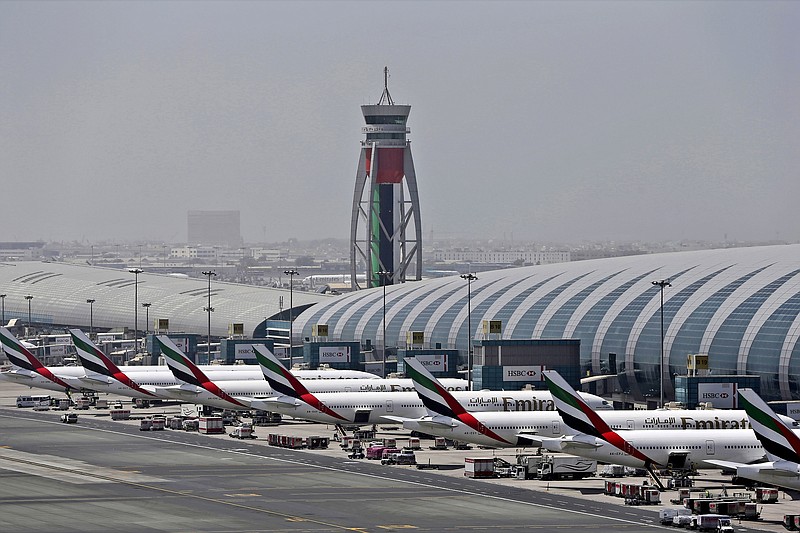 FILE - In this April 20, 2017, file photo, Emirates planes are parked at the Dubai International Airport in Dubai, United Arab Emirates. The Middle East's largest airline, Emirates, announced on Tuesday a net loss of $5.5 billion over the past year as revenue fell by more than 66% due to global travel restrictions sparked by the coronavirus pandemic. (AP Photo/Kamran Jebreili, File)

DUBAI, United Arab Emirates -- The Middle East's largest airline, Emirates, announced Tuesday a net loss of $5.5 billion over the past year as revenue fell by more than 66% because of global travel restrictions sparked by the coronavirus pandemic.

It marks the first time in more than three decades that the Dubai-based airline's parent group has not churned out a profit, underscoring just how dramatic an impact covid-19 has had on the aviation industry. Emirates Group, which also operates dnata Travel Services and ground services at airports, reported a total loss of $6 billion.

The Dubai-based airline said revenue had declined by $8.4 billion, even as operating costs decreased by 46%. The company has furloughed a third of its staff because of the pandemic's effect on its bottom line.

Revenue as a whole for the company, including its dnata services, stood at $9.7 billion, compared with $28.3 billion the year before.

Emirates' success is seen as integral to the health of Dubai's economy, which relies heavily on travel, tourism, real estate and investment to thrive. In a clear indication of just how important Emirates Air is to Dubai, the state-owned carrier was thrown a $2 billion lifeline from the government to stave off a liquidity crunch in 2020. The move underscored how dire the situation had become for one of the world's leading airlines amid the pandemic.

The International Air Transport Association has said it expects airlines to continue to suffer financial losses in 2021, despite vaccination rollouts in many developed countries around the world. The aviation industry's largest trade association estimated that airline losses reached as high as $126 billion in 2020.