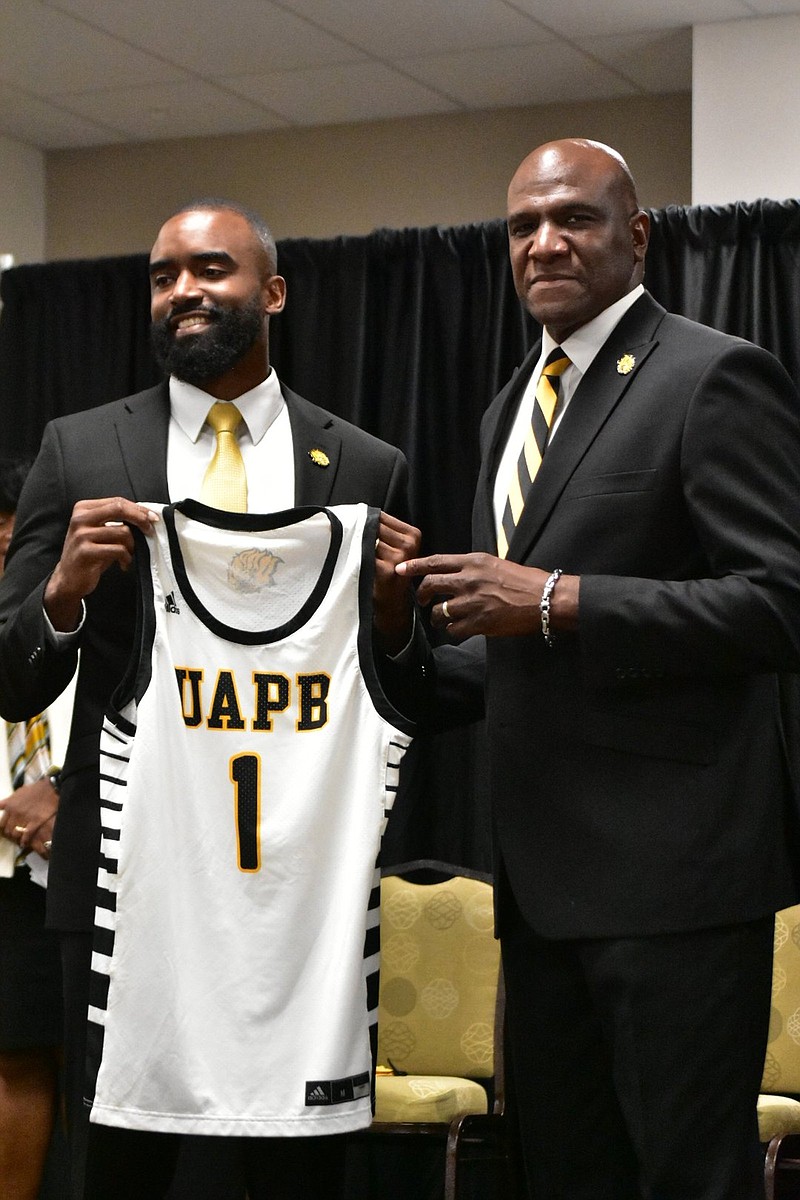 After thanking God, his mother Sheri, his father Eric and the athletic administration of the University of Arkansas-Pine Bluff, new Golden Lions men's basketball Coach Solomon Bozeman shifted his focus to the school's fan base Tuesday and laid out his lofty aspirations.

"We're going to win here," said the 33-year old who starred at Magnolia High School and later the University of Arkansas at Little Rock said. "We're going to win multiple championships. We're going to get to the NCAA Tournament multiple times. And when we get there we will shock some people. I want you to know that."

Bozeman brought energy and expectations to his introductory news conference, which took place inside UAPB's STEM Conference Center five days after the school announced his hiring. The Little Rock native comes to the Golden Lions from Oral Roberts, where he spent three seasons as an assistant coach and helped guide the Golden Eagles to the Sweet 16 in 2021. Bozeman has also held previous assistant roles with Abilene Christian (2014-16) and UALR (2016-18).

After speaking with Bozeman's previous bosses, players he's worked with and high school coaches around the state, Robinson said it was Bozeman's consistency and success in every role that set him apart.

"He's a young man, but he's an old spirit," said Robinson, who was also introduced Tuesday after his interim tag was removed on June 4. "He's wise beyond his years. He's a workhorse. He is a young man that's built credibility wherever he's gone. That's something you can't fake, and what what are were looking for are people who make a real impact on our student's lives."

Bozeman's arrival fills a head-coaching role that sat vacant for more than two months following George Ivory's retirement on April 7. The Golden Lions finished 4-21 in Ivory's final season and have recorded only one winning season since reaching the NCAA Tournament in 2010. Despite the drought, Bozeman plans to succeed and to do it fast.

"I expect to win here," Bozeman said. "I'm not planning on taking two or three years. We want to get this thing done Year 1."

Year 1 success will ride on the abilities of new faces in Pine Bluff following the transfers of leading scorer Shaun Doss Jr. and top rebounder Markedric Bell. Bozeman said Tuesday that he's been "working this job like it was mine for a month and a half now," and has assembled a class of as many as eight players, which he plans for the program to announce next week. Already verbally committed to that class are junior college additions Jaylan Thomas and Brahm Harris, and Western Kentucky transfer Kylen Milton -- the latter pair each hailing from Arkansas.

Bozeman arrives with seven seasons of experience as an assistant and knowledge gained from working under a series of coaches with diverse skillsets.

From Joe Golding and Brette Tanner at Abilene Christian, he learned the elements required to build one of the nation's top defenses. With Wes Flanigan and the Trojans, Bozeman understood the importance of the personal side of the game. And under Paul Mills at Oral Roberts, he picked the intricacies of spacing in an up-tempo offense that produced the nation's leading scorer in Max Abmas at 24.5 points per game in 2020-21.

He aims to incorporate all of their teachings into his program's style, and on Tuesday described a rigorous defense and an offense that will play open and fast, shoot three-pointers and play with a goal of scoring 80-85 points per game.

"Everybody around here in Arkansas, the UAPB fans, the community -- get your popcorn ready," Bozeman said. "It's about to be fun and exciting. I'm telling you right now we're going to play an exciting brand of basketball on the offensive end. We're going to play with pace and space. On the defensive end, we'll be tough and gritty. We will be one of the better defensive teams in the country."

On the recruiting front, Bozeman said he plans to build his program through the state of Arkansas. He referred to the state where he was born and later played both high school and college basketball as his home several times, and boasted his successes in recruiting from the state across his assistant roles, mentioning Little Rock Parkview's Jaylen Franklin -- who Bozeman recruited to Abilene Christian -- and Forrest City's R.J. Glasper and Baptist Prep's Issac McBride, a pair of Arkansans he brought to Oral Roberts.

To drive home his passion for the state, Bozeman went against the wishes of his wife Myla and told the gathered crowd about the eight-letters tattooed across his back that spell out the word, "Arkansas".

"I can't tell you how much I love Arkansas," Bozeman said. "Arkansas has been great to me. Recruiting these student-athletes from Arkansas is what I want to do. It's what I'm going to do. We're going to win with guys from Arkansas."

Bozeman at a glance

NOTEWORTHY Bozeman is the son of Eric Bozeman, who previously served as head men’s basketball coach at Henderson State University and Southern Arkansas University. … Played his senior season of high school at Magnolia where he scored 28.5 points per game and led the Panthers to a state championship game appearance. … Transferred to UALR in 2009 and started for two seasons with the Trojans, guiding UALR to the NCAA Tournament and earning Sun Belt Conference Player of the Year honors in 2011. … Played professionally in the NBA’s Developmental League and overseas (2011-14).