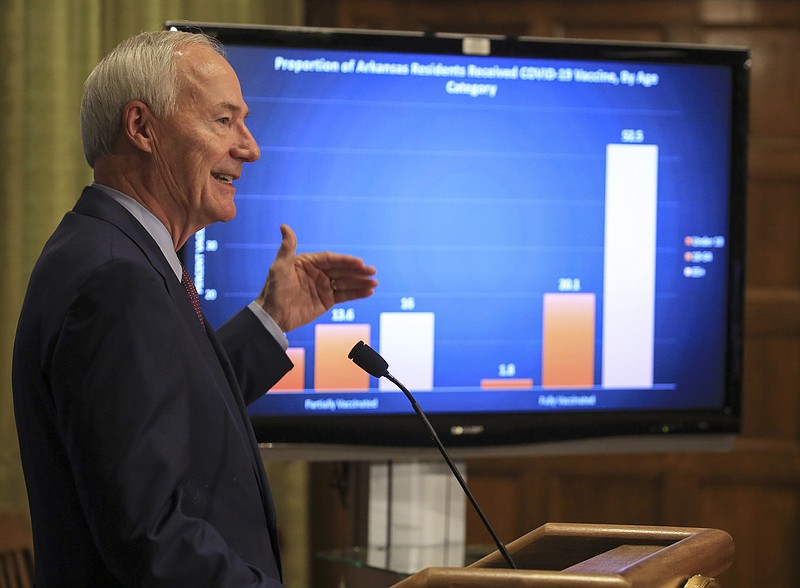 The number of active coronavirus cases in Arkansas rose to its highest level in more than a month Tuesday, while the state's total case count since March 2020 rose by 302.

The increase in new daily cases was the sixth in a row that was larger than the one a week earlier.

After falling a day earlier, the number of people hospitalized in the state with covid-19 rose by one, to 204.

[Video not showing up above? Click here to watch » https://www.youtube.com/watch?v=DoBeXDaXvXc]

The state's death toll from the virus, as tracked by the Department of Health, rose by six, to 5,869.

Also on Tuesday, the state for the first time released information on money people have won from scratch-off lottery tickets handed out since June 1 as rewards for receiving a vaccine shot.

Scott Hardin, a spokesman for the state Department of Finance and Administration, said 300 people who received the tickets had won a total of $12,590, including one person who won $500.

Tuesday's increase in cases was larger by 71 than the rise the previous Tuesday.

It was the biggest one-day jump since a spike of 393 cases on Friday.

Already at its highest level since March 22, the average number of cases added to the state's tally each day over a rolling seven-day period rose to 235.

At his weekly news conference, Gov. Asa Hutchinson said infections that occurred over Memorial Day weekend could be contributing to the uptick.

"It's a little bit hard to say, because we really have just moved back to a normal society in Arkansas life, whether it's sports, school, or whether it's work, and so all of that increased activity would have a bearing on it, but there's only one thing that we can do, is to encourage vaccinations, and we're doing that every day," Hutchinson said. "We put incentives in place. We've got our public messaging, so it's really up to the public.

"Our hands are limited, and it's a matter of responsibility and everybody taking the action that they need to."

With new cases outpacing recoveries, the number of cases in the state that were considered active rose by 109, to 2,144, its highest level since May 9.

Health Secretary Jose Romero said Memorial Day gatherings are likely "a big part" of the increase and that the state could see a similar escalation after the Fourth of July.

"There are a lot of people that aren't adhering to the [U.S. Centers for Disease Control and Prevention] recommendations" for people who haven't been fully vaccinated to wear masks in public places and practice social distancing, Romero said.

"I think it serves a reminder that we're not vaccinated enough, and we won't be back to normal until we have a significant number of our population fully vaccinated," he said.

Romero said it was "too early to tell" whether more transmissible variants of the virus that have increasingly been identified in Arkansas are contributing to the uptick.

As tracked in CDC data, the number of Arkansans who had received at least one vaccine dose rose Tuesday by 1,639, to 1,229,128, representing about 40.7% of the state's population.

Among the states and District of Columbia, Arkansas continued to rank 45th in the percentage of its residents who had received at least one vaccine dose, and 49th, ahead of only Alabama and Mississippi, in the percentage who had been fully vaccinated.

Nationally, 52.6% of people had received at least one dose, and 43.9% were fully vaccinated.

The number of vaccine doses that Arkansas providers reported having administered, including second doses of the Pfizer and Moderna vaccines, rose Tuesday by 6,502, according to the Health Department.

That was larger by 369 than the increase the previous Tuesday.

Hutchinson said that was "pretty good."

"I'm starting to see a correlation between active cases and people getting vaccinated," the Republican governor said.

"It's just human nature. As you see a threat, more people get vaccinated. They want to protect them in the future, and so we've got to catch up, and I hope that that will continue to increase."

At almost 5,400, the average number of doses administered each day over the past seven days was still down from the average of 5,570 a day the previous week.

The average peaked at more than 23,000 a day in early April.

Hutchinson announced late last month that Arkansans who received a vaccine dose on or after May 26 would be eligible to claim one of the $20 scratch-off lottery tickets or a pair of gift certificates for hunting and fishing licenses worth a total of $21.

He said the state was buying 50,000 of the lottery tickets and 50,000 pairs of gift certificates and could buy more if the incentives proved effective.

Two cards each worth $1 million remained in circulation in the game, known as the $1 Million Spectacular, as of Tuesday, along with 3,800 cards worth at least $500, he said.

Hardin has said that state officials would know if someone won $1 million from one of the lottery tickets, but wouldn't have information on people who won smaller amounts, ranging from $20 to $50,000, until the game had concluded and a final audit was conducted.

On Tuesday, however, he said in an email that the lottery had "developed a way to provide some of this info while the game remains active."

The department will be providing weekly reports on winnings from the tickets, he said.

People can claim the tickets or gift certificates at vaccine clinics organized by the Health Department or the Arkansas Foundation for Medical Care or by bringing their vaccination card to one of the department's local health units.

Health Department spokeswoman Danyelle McNeill said the number of people who had claimed one of the rewards rose Tuesday by 87, to 1,698.

That included an increase of 69 people who had received lottery tickets, bringing the total to 1,289.

The number who had received gift certificates rose by 18, to 409.

In their latest forecast report, released Tuesday, researchers with the University of Arkansas for Medical Sciences' Fay W. Boozman College of Public Health warned that the pace of vaccinations in the state is "too slow."

"We acknowledge achieving higher vaccination rates is complicated by the relaxed attitude with which the epidemic is now perceived," the researchers said in the report, dated June 6.

"Outside of more metropolitan areas in the state, mask wearing is rare. In almost all areas, local gathering places give little concern to social distancing and large groups of people are gathering. There seems to be a strong feeling in the state that the pandemic is over."

They called that "more wishful thinking than reality, especially for those who are not fully vaccinated."

The delta variant, which first emerged in India, accounts for about 6% of infections in the United States and will soon become the dominant strain if it spreads as it did in the United Kingdom, the researchers wrote.

"We are not advocating a return to strict virus control measures in the state at this time," the researchers said.

"But, we are concerned that August and September, when children and young adults begin to go back to schools and colleges, may be a rough time for the state. Schools and colleges are wonderful environments for the spread of viral infections."

The report didn't contain projections that went beyond Monday of next week, when it predicted the state's cumulative count of cases would rise to 344,179.

At 344,369, the state's count had already passed that number as of Tuesday.

The 1,240 polymerase chain reaction, or PCR, tests that the department had received was down by 177 from the number a week earlier, while the 663 antigen tests was down by 31.

McNeill said 6.1% of the PCR and antigen tests performed during the week ending Monday were positive.

State Epidemiologist Jennifer Dillaha said Monday the percentage over a rolling seven-day period has been trending upward since it hit a low of about 2.5% in early April.

The number of cases confirmed through PCR tests in Arkansas rose Tuesday by 138, to 268,530.

The number of "probable" cases, which include those identified through antigen tests, rose by 164, to 75,839.

The state's death toll rose by six, to 4,659, among confirmed cases and remained at 1,210 among probable cases.

The number of the state's virus patients who have ever been on a ventilator rose by three, to 1,692.

CORRECTION: The number of active coronavirus cases in Arkansas rose to its highest level in more than a month Tuesday, up 109 to 2,144, as the state's total case count since March 2020 rose by 302. An earlier headline on this story misstated which count rose by 302.