U.S. says steel in I-40 bridge prone to crack 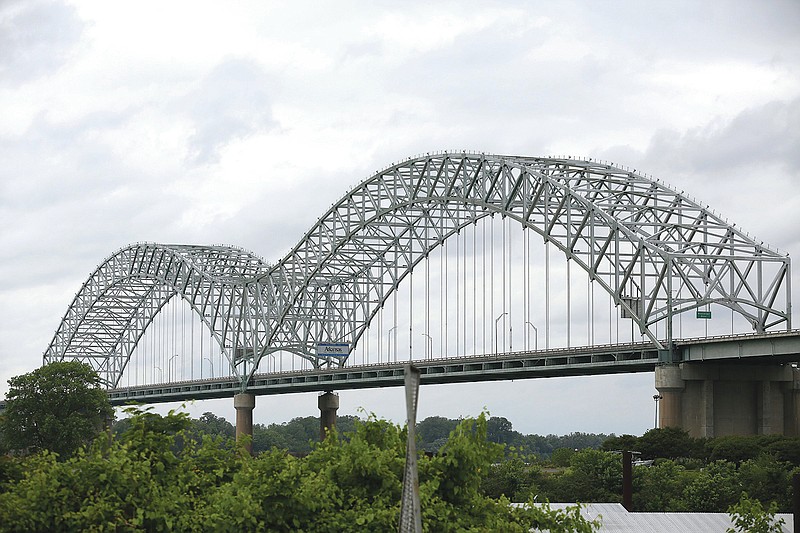 The significant fracture that forced the closing of the Interstate 40 bridge over the Mississippi River on May 11 occurred on a steel beam that was made of a grade of steel that the Federal Highway Administration concluded was susceptible to cracks.

The conclusion resulted in the 2011 closing of the Sherman Minton Bridge on Interstate 64 over the Ohio River between Louisville, Ky., and New Albany, Ind., and a technical advisory the same year to all state transportation agencies operating and maintaining fracture critical bridges, of which the I-40 bridge is one. Fracture critical bridges have steel elements subject to tension whose failure would probably cause a portion of or the entire bridge to collapse.

The Arkansas Department of Transportation has acknowledged that parts of the I-40 bridge contained a grade of steel commonly known as T-1 and that, in response to the technical advisory, it developed a special inspection procedure for the bridge.

However, it isn't clear whether the significant fracture that caused the bridge to be closed was because the steel was susceptible to cracking.

"The fracture is more than the cracking discussed in the advisory," agency spokesman Dave Parker said. "Forensic testing will be required to give additional information about the area."

The development comes as the Arkansas Highway Commission convenes for the first time since the bridge was closed.

The five-member body is scheduled to receive a status report on the bridge today and will consider the department's operating budget for fiscal 2022, which begins July 1. Lorie Tudor, the agency's director, has said it probably will include adjustments to bolster bridge inspections.

An agency employee was fired after it was discovered the heavy bridge inspection team he led didn't properly inspect the bridge in two successive years and overlooked the fracture, which called the department's bridge inspection policies and procedures into question.

The I-40 bridge closing has diverted traffic to the adjoining and older Interstate 55 bridge, which has created long delays crossing the Mississippi River. About 30% of the traffic on both bridges was trucks, creating logistical problems that the industry estimates is costing it $2.4 million per day.

An inspection team from the civil engineering firm Michael Baker International discovered the fracture by chance May 11. The department hired the firm to inspect the suspension cable portion of the bridge. The Michael Baker team also will resume its inspection, said Rex Vines, chief engineer for the Arkansas Department of Transportation.

Michael Baker International also is conducting an in-depth inspection of the bridge using ultrasonic testing, a process that will take several weeks.

In an update posted Monday afternoon, the Tennessee Department of Transportation said the inspection is continuing.

"So far, there is nothing of concern," the update said. "However, if any issues are found during the repairs, it could affect the bridge's opening date."

The Sherman Minton Bridge episode might prove instructive. It was ordered closed Sept. 9, 2011, after cracks were found in its main load-bearing structural element. The crack was repaired by Sept. 23, but an inspection of the rest of the bridge uncovered additional cracks. The repairs cost $20 million. The bridge reopened Feb. 17, 2012.

The Federal Highway Administration issued its technical advisory two days after the Sherman Minton Bridge was closed. It blamed the cracks on improper fabrication procedures as well as the grade of steel used.

"Several cracks were found in the butt welds or their associated heat-affected zones of the tension ties of both spans," the advisory said. "It was subsequently determined that the cracking was very likely caused by hydrogen that was introduced into the weld as the result of improper fabrication procedures. T-1 steel is known to be very susceptible to this type of cracking."

Gary Prinz, a civil engineering professor at the University of Arkansas who specializes in fractures and fatigue in metals, has said the fracture on the I-40 bridge appeared to be at a weld.

The advisory "strongly recommended" that all state transportation agencies review the inspection records of the fracture critical bridges in their inventory to "ensure any components fabricated with T-1 steel have been regularly and appropriately inspected and that any critical findings have been properly identified and addressed."

The advisory said that if any deficiencies were found, the state agencies were to follow up and place "priority on inspection or remediation of components primarily in tension such as arch ties, hangers or truss members that contain butt welds."

A butt weld, the most common type of joint used in the fabrication of structures and piping systems, is a weld between two pieces of metal butted together with the abutted ends shortened and thickened and fused together under heat.

The federal agency also recommended that on fracture critical bridges using T-1 steel "prior to the adoption of the Fracture Control Plan of the ... Bridge Welding Code, where cracks due to a lack of hydrogen control during welding have previously been found, that the soundness of all butt welds in those tension components be verified through visual and non-destructive testing unless this verification has previously been conducted."

The Fracture Control Plan was initiated by the American Association of State Highway and Transportation Officials in the late 1970s. The plan included requirements for stronger steel and, according to the industry, resulted in fracture critical members that are much stronger than those made before the mid-1970s.

Construction began on the the 3.3-mile I-40 bridge connecting West Memphis and Memphis in the late 1960s. It opened in 1973, well before adoption of the Fracture Control Plan.

The Arkansas Department of Transportation developed a special inspection procedure for the I-40 bridge that has been in place since May 2012.

The plan noted some similarities between the I-40 bridge and the Interstate 24 bridge over the Ohio River between Kentucky and Illinois. In 1979, the latter bridge was closed because of cracks found in the main members and tie girders of the tied arch span, according to the document.

According to published reports, structural problems on the Ohio River Bridge included 119 cracks as a result of defective welding, and the bridge was closed from August 1979 through October 1980. It was closed to truck traffic until the summer of 1981.

"An electro slag welding process was used during construction of this bridge," the plan said. "The I-40 Mississippi River bridge was constructed with the same process."

The Federal Highway Administration banned that welding process in 1977 for many applications under its jurisdiction, including bridge fabrication. The ban was lifted in 2000 after research from universities and industry produced a replacement called "Narrow Gap Improved Electro Slag Welding."

The I-40 bridge underwent a nondestructive examination of its welds in 1982. The Tennessee Transportation Department retained an outside engineering firm in 2010 to "clean and inspect the upper members of tied arch truss," according to the inspection procedure document.

During the annual inspection, areas of the bridge inspected are "mostly limited to only the tension steel members whose failure might result in the collapse of the bridge," according to the document.

Also during the annual inspection, "the top chord of the arch span shall be walked and all members [tension and compression] of the upper truss will be visually inspected," the document said.

Starting in 2012, the Arkansas Transportation Department secured the services of an outside engineering firm to provide a "hands-on" inspection of the tied arch truss members above the roadway every two years "or until a catwalk is installed to provide access for AHTD bridge inspectors."