2 states reopen; virus rises in others 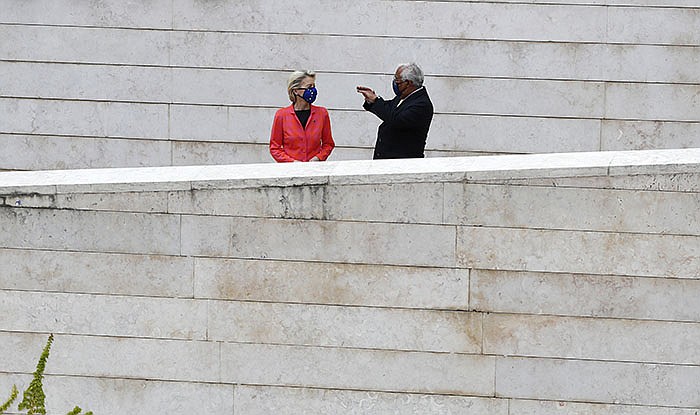 As cases tumble and states reopen, the potential final stage in the U.S. campaign to vanquish covid-19 is turning into a slog, with a worrisome variant gaining a bigger foothold, and lotteries and other prizes failing to persuade some Americans to get vaccinated.

While two of the states slammed hardest by the pandemic, California and New York, celebrated their reopenings this week with fireworks and a multimillion-dollar drawing, hospitalizations in parts of Missouri are surging and cases are rising sharply in Texas, illustrating the challenges the country faces this summer.

One major concern is the highly contagious and potentially more severe delta variant of the coronavirus that originated in India. While health officials say the vaccines are effective against it, the fear is that it will lead to outbreaks in states with lower vaccination rates.

The delta variant has increased from 2.7% of all cases in May to 9.7% this month, Dr. Rochelle Walensky, director of the U.S. Centers for Disease Control and Prevention, said during a call for governors Monday, according to details provided by the Washington governor's office.

At the same time, states are convening focus groups to better understand who is declining to get vaccinated, why and how to convince them that getting the shot is the right thing to do.

"It's a race between the vaccines going into people and the current or future variants," said Kansas Health Secretary Dr. Lee Norman.

Average deaths and cases per day have plummeted 90% or more across the U.S. since the winter, but the picture is uneven.

In Texas, the rolling average of newly confirmed infections has climbed from about 1,000 per day on May 31 to nearly 2,000 this week.

A portion of southern Missouri is seeing a big rise in coronavirus cases and hospitalizations at just the wrong time -- as tourists eager to get out after being cooped up for a year make their way to popular destinations such as Branson and Lake of the Ozarks.

Data from the state Health Department's covid-19 dashboard Wednesday showed 206 people hospitalized with the virus in southwestern Missouri -- nearly double the 111 hospitalizations from that region at the start of May. The number of people in intensive care units in the region has tripled -- from 22 a month-and-a-half ago to 65 now. Meanwhile, statewide hospitalizations have remained steady since March.

Health experts cite two factors driving the surge: The presence of the faster-spreading delta variant and a reluctance among residents to get vaccinated.

[Video not showing up above? Click here to watch » https://www.youtube.com/watch?v=tD1opjnQCDs]

The U.S. is expected to fall short of President Joe Biden's goal of dispensing at least one dose to 70% of American adults by July 4. The figure stands at about 65%.

Among the states that don't expect to hit the goal are Kansas and Idaho. In Idaho, some counties have adult vaccination rates under 30%, said Elke Shaw-Tulloch, public health administrator for the state Department of Health and Welfare.

To increase vaccinations, several states are working to break up large shipments of vaccine into smaller lots, which can then be distributed to doctors' offices. Health officials see primary care physicians as key to easing people's concerns.

"People want to hear it from their doctor, their medical providers, people that they know and trust," Norman said.

Big, splashy giveaways such as lotteries have gotten a lot of headlines and dispensed millions of dollars. In Maine, home of the outdoor wear company L.L. Bean, Bean gift cards were a big hit. But elsewhere, there has been skepticism about such programs.

Shaw-Tulloch said some businesses in Idaho had offered financial incentives for employees to get vaccinated but didn't get many takers. Instead, she said, the key is making it easy to get a vaccine by turning it into part of a person's "daily flow."

Some people's attitude is that "if a vaccine were to fall out of the sky and hit me in the arm, I'll get it. But I'm not going to interrupt my busy daily life to make that effort and go in and get a vaccination," she said.

Meanwhile, European Union members agreed Wednesday to add the U.S. to the list of countries for which they should gradually remove restrictions on nonessential travel. The move was adopted during a meeting in Brussels of permanent representatives to the bloc.

The recommendation is non-binding, and national governments have authority to require test results or vaccination records, and to set other entry conditions.

The EU has no unified covid-19 tourism or border policy, but has been working for months on a joint digital travel certificate for those vaccinated, freshly tested or recently recovered from the virus. EU lawmakers endorsed the plan last week.

The free certificates, which will contain a QR code with advanced security features, will allow people to move between European countries without having to quarantine or undergo extra coronavirus tests upon arrival.

It's mainly meant for EU citizens, but Americans and others can obtain the certificate, too -- if they can convince authorities in an EU country they're entering that they qualify for one. And the lack of an official U.S. vaccination certification system may complicate matters.

Some EU countries have already started allowing in American visitors, though. On the other hand, Belgian Prime Minister Alexander De Croo said this week that a careful and phased-in approach should remain the rule.

"Let's look at science and let's look at the progress. Let's look at the numbers, and when it's safe, we will do it," De Croo said. "The moment that we see that a big part of the population is double-vaccinated and can prove that they are safe, travel will pick up again. And I would expect that over the course of this summer."

Britain announced Wednesday that it will require covid-19 vaccinations for nursing home workers in England, arguing that the need to protect vulnerable residents outweighed employees' right to choose whether to get the shots.

Health Secretary Matt Hancock announced the new rules together with plans for a public consultation on extending the vaccine requirement to National Health Service workers. He described the vaccination mandate as a sensible step to save lives.

"The vast majority of staff in care homes are already vaccinated but not all, and we know that the vaccine not only protects you but protects those around you," he told the House of Commons. "Therefore, we will be taking forward the measures to ensure the mandation as a condition of deployment for staff in care homes."

Unions have objected to mandatory vaccinations, in part because it treats those workers differently than the general population.

The GMB union said the government should focus on persuading workers to get vaccinated rather than imposing mandates that might alienate staff members. According to the union, more than a third of home care workers have indicated that they would consider leaving their jobs if they were forced to be vaccinated.

In a similar move, service-sector and municipal workers in Moscow were ordered to get vaccinated amid a spike in covid-19 infections, as the Kremlin denied any reversal in Russian President Vladimir Putin's opposition to compulsory inoculation.

At least 60% of workers at consumer-facing businesses and city employees, including health professionals and teachers, must receive doses of one of Russia's domestically-developed vaccines by July 15, according to an order from Moscow's public-health office published Wednesday.

"If you work in an organization that serves an indefinite circle of people, during an epidemic it is definitely not only your own business," Mayor Sergei Sobyanin wrote on his blog announcing the measures.

The number of covid-19 cases in the Russian capital has soared this month as the highly-contagious delta variant first identified in India spreads, with daily infections nearing December highs.

Sobyanin, who called the vaccination decision "difficult but necessary," restored sweeping restrictions in the capital this week after announcing that city hospitals were re-converting thousands of beds to deal with the surge in infections.

The announcement by Prime Minister Jean Castex was made as France is registering about 3,900 new virus infections a day, down from 35,000 in the March-April peak.

Castex welcomed the "very good news" and said the curfew will be lifted on Sunday, 10 days earlier than expected. The decision was made at a government meeting focusing on the virus.

"It's actually improving more rapidly than we had hoped for," Castex said. "My dear fellow citizens, I say it, I feel it: we are experiencing an important moment, a happy moment of return to a form of normal life again."

Wearing a mask will still remain mandatory outdoors in crowded places like street markets and stadiums, he said. People are also required to wear masks indoors in public spaces, including at work -- with an exception for restaurants and bars.

"We have not known such a low level of virus spreading since last August," Castex said. "Those positive evolutions are due to the mobilization of the French and to the vaccination campaign."

Still, President Emmanuel Macron called on French people to remain cautious on the sidelines of an event promoting startups in Paris.

"We can only welcome the fact that we have had the right strategy. ... We see where we are and each time we are adapting things," Macron said. "But with great caution, nothing is guaranteed. ... So I'm inviting all our fellow citizens to continue to get the vaccine." 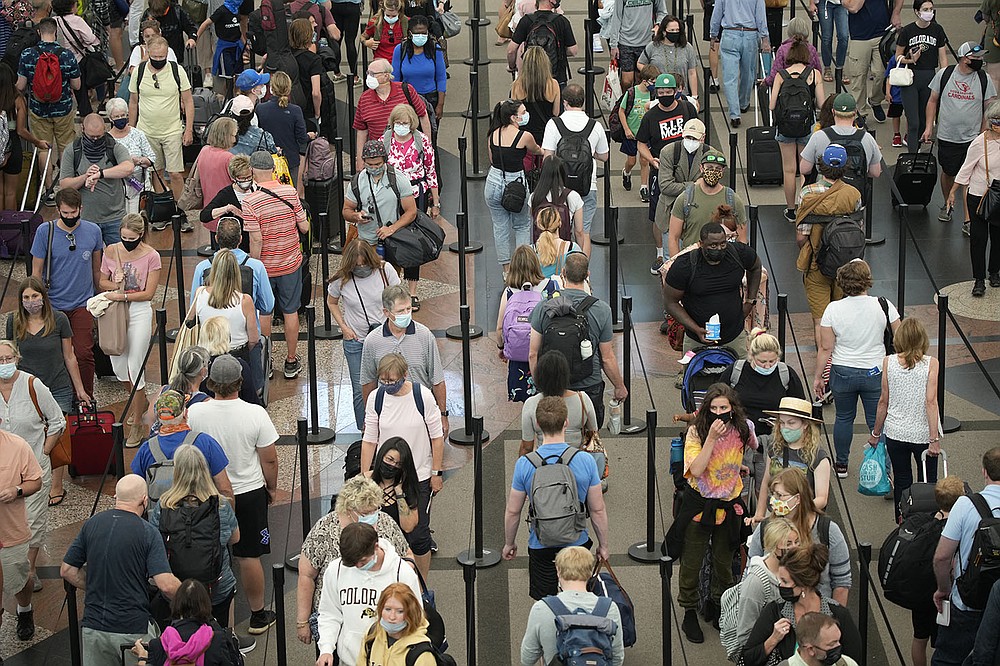 Travelers wait to pass through the south security checkpoint Wednesday at Denver International Airport. While some states are seeing a drop in coronavirus cases, cases are surging in places such as Texas and Missouri, where vaccination rates are low. (AP/David Zalubowski)