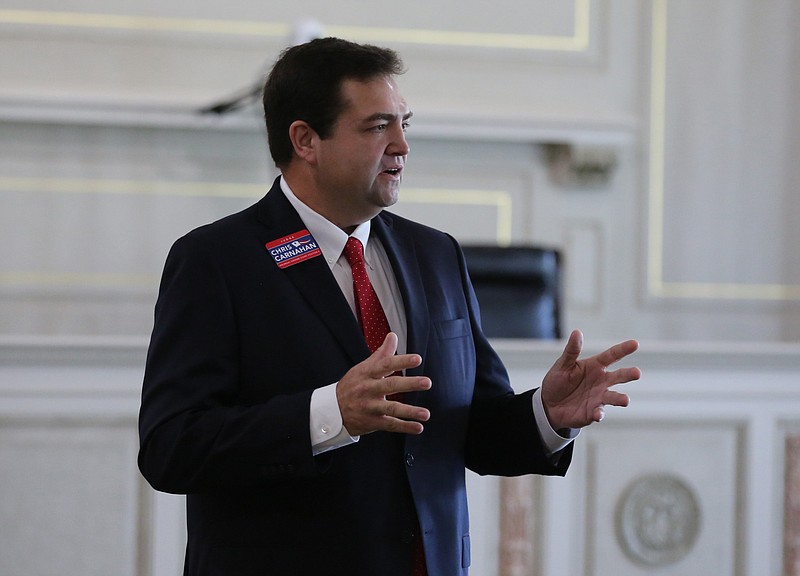 District Judge Chris Carnahan announces his intention to run for a seat on the Arkansas State Supreme Court on Wednesday, June 16, 2021 at the state Capitol in Little Rock. (Arkansas Democrat-Gazette/Thomas Metthe)

Wynne, who has served as an associate justice in Position 2 on the state Supreme Court since 2015, announced last month his bid for a second eight-year term.

Carnahan, who is the Division 1 state district court judge for Faulkner and Van Buren counties, said, "One of the reasons and probably the main reason that I am running for the Arkansas Supreme Court is to put an originalist face on the interpretation of the laws passed by the Arkansas General Assembly or by the people of the state of Arkansas."

He said he believes in an interpretation that looks at the actual text of legislation and puts it in the context of the time that the law was written.

Carnahan said, "I believe the role of a judge is a very minimalist role," which means that "sometimes there are issues that just aren't out there for us to determine.

"But when there is an issue that is ripe for the court's consideration, my belief is what you need to do is you need to give deference to the legislative bodies," he told about two dozen people in the Old Supreme Courtroom in the state Capitol.

"They get the first chance to craft a bill that makes sure that meets with interpretations or passes constitutional muster," Carnahan said. "Only if it doesn't on challenge, should we even begin to act. But when we do act, it is not going to be Chris Carnahan's preference for whether or not a law is good or bad. There may be bad results. There may bad legislation. ... But it doesn't mean that my personal choice should trump the will of the people who are duly elected to pass laws."

"I don't even intend on being a super legislator and trying to enact laws from the bench nor do I intend to go willy nilly in unique directions that are outside of the mainstream of the legal tradition," Carnahan said. "In essence, what I want is to return the Arkansas Supreme Court in what I hope will be a majority from my election to an orginalist body."

Hutchinson appointed him as circuit judge in the 20th Judicial Circuit, which includes Faulkner, Searcy and Van Buren counties, from Jan. 1, 2017-Dec. 31, 2018.

Carnahan previously served as general counsel for the state Board of Pharmacy, as a deputy prosecuting attorney in the 20th Judicial Circuit and the 15th Judicial Circuit, and as an associate of the Tatum, Tatum and Riedel Firm in Danville. He also was executive director of the state Republican Party from 1999-2001.

Asked whether he expected third-party groups to get involved with attack ads in the race against Wynne, he said, "I have no knowledge of that nor should I ever or Justice Wynne have any knowledge of something like that.

"But people can certainty get involved. It's their First Amendment right as long as they don't libel somebody," Carnahan said.

Before Wynne's election over attorney Tim Cullen of Maumelle in May 2014, the state Supreme Court race received national attention when the Law Enforcement Alliance of America, an organization based in Lake Ridge, Va., began buying airtime for commercials targeting Cullen.

The ads, which Cullen's campaign estimated to cost about $400,000, criticized Cullen for his courtroom defense of a sex offender. At that time, Cullen said the ad was a lie, and he called on Wynne to repudiate the claims the group made. Wynne did not speak out against the ads, stating that he was not involved with them.

Position 2 is one of three Supreme Court seats up for election next year.

Associate Justice Rhonda Wood confirmed last month that she plans to seek reelection to a second eight-year term in Position 7. So far, no one has announced a challenge to her.

Two weeks ago, Circuit Judge Gunner DeLay of Fort Smith announced that he's seeking Position 6, now held by Karen R. Baker. Baker has yet to announce whether she plans to seek reelection. Baker filled a vacancy on the high court in a special election in 2010 and won reelection in 2014.

The filing period for candidates for state and federal offices in Arkansas is Feb. 22-March 1, 2022, with the primary and nonpartisan judicial elections held May 24, according to the secretary of state's office.