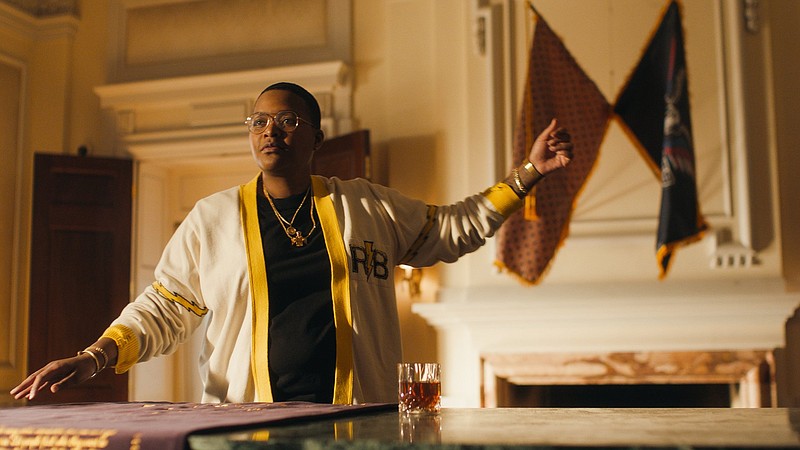 Sam Jay’s new talk show, “Pause With Sam Jay,” which airs at 8 p.m. CDT Fridays, debuted May 21 on HBO. One of the comedian’s big breaks came when she was hired as a writer on “Saturday Night Live.” (HBO)

ATLANTA — Sam Jay considers her years in Atlanta as crucial in her development.

The newest late-night talk show host on HBO, with her weekly show "Pause With Sam Jay," Jay grew up in Boston but wanted to get out. She landed at Clark Atlanta University, but couldn't afford it. So she attended a small community college at Phipps Plaza instead. "You had to go inside the Lord & Taylor down an escalator," she said. "It was crazy."

Before entering the comedy world, Jay said she worked all sorts of jobs: the IRS in the mail room, a call center, a day-care center, a Starbucks and as an artist manager for musicians. In her 20s, she cobbled together enough income to pay the rent and hit the clubs.

"I came out while in Atlanta," she said. "I lived two different lives there. I used to go to the Library a lot in my straight days. Bounce. Vision. Django. Level 3. 112." Once out, she could be found at My Sister's Room, "any Traxx event," Club Miami and the Velvet Room.

Jay, now 39, said there was no light-bulb moment about her sexuality. "I was just gay," she said. "There were a lot of gay people in Atlanta. I was getting hit on by women. I didn't hate it. I kind of just flowed that way."

She dabbled with stand-up at the Star Bar in Little Five Points, got sick with lupus and returned to Boston in her late 20s to reconnect with the family. That's when she began working the comedy route in earnest. She said she first did shows in Vermont and New Hampshire. "Just a bunch of white people I didn't know," she said. "If it goes all wrong, out here nobody knows me. I eventually got my confidence. I became pretty well known within the stand-up comedy community."

Last year, she landed her first Netflix special. She chose Atlanta because it had so much meaning for her and it was less pressure than doing it in Boston. She ended up at the Masquerade, which normally hosts bands, at Underground Atlanta. At the start of her special, she noted that the last man she ever slept with she met at Underground Atlanta near that venue.

"It was very full circle for me," she said. "Atlanta is my second home. I have a lot of connections to the city. It's the city where I found myself and figured out who I was. I grew up a lot in Atlanta."

Last year, she and producer Prentice Penny met and conceived "Pause With Sam Jay" and got HBO to sign on.

The show is nothing like a traditional late-night talk show. There is no desk. There is no audience. There is no band. There is no monologue. In fact, my references to "Tonight Show" forebears Steve Allen and Jack Paar meant nothing to Jay.

Instead, Jay's show is set up like a house party interspersed with interviews, sketches and animation, with each episode wrapped around a single topic. She invited friends from all aspects of her life to join the parties. "Some are from high school," she said. "Some are from Atlanta when I was doing music. Some are straight. Some are friends when I came out."

The episodes were all taped just as the vaccines were rolling out and people were meeting up again in groups for the first time in ages.

"We all missed each other," she said. "It was just nice. It helped make the party feel so cool and warm."

Jay is not shy about exploring difficult topics. The first episode takes on an offensive word, defining it as "exploiting one's own community for personal gain or acceptance from a dominant culture." In other words, the group discusses Black people who "sell out" to white people.

"I just thought it was a great way to say: 'This is the show. You either [expletive] with it or you don't. It just hits you in the face."

She interviewed two young Black conservatives without being judgmental, appreciating their efforts to break the status quo, which is what young people are supposed to do, she said.

In the next two episodes, she talks about Black celebrity and status, then how different people define personal freedom. There are six episodes total for the first season. She ends each episode with a mission statement of sorts.

"We want people to take something at the end of every episode that is actually applicable and not lofty and heady," she said.

Here is part of her conclusion of episode No. 1: "... We should all be allowed to explore. This is a big, crazy place so we're probably going to get knocked around a few times. We have so many standards for all of us about how people should look, how they should talk, what they should wear, and none of that directly affects how we treat each other. Intent matters and you can't determine that without talking to me. So when you see a person who's not like you, give them some grace. You don't know their life, and they don't know yours. We are constantly changing."