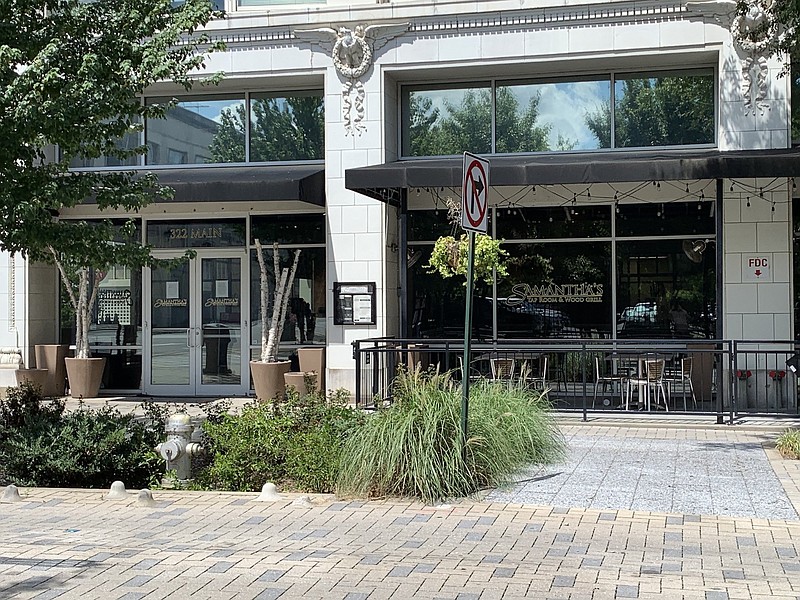 After being closed since mid-February, when bursting pipes caused by an ice storm flooded its basement, Samantha's Tap Room & Wood Grill, 322 Main St., Little Rock, will reopen for dinner at 4 p.m. July 7 and at 11 a.m. July 8, for lunch. Co-owner Chris Tanner says the restaurant will then return to full pre-pandemic hours, 11 a.m.-11 p.m. Monday-Saturday. He also expects to debut two new menu items. The phone number is (501) 379-8019. The website is samstap.com. The Facebook page is facebook.com/samanthastaproom.

Restaurant Bar Mar y Tierra Seafood & Grill, 1900 W. Third St., Little Rock, finally passed all its inspections earlier this week and manager Edgar Torres says his target date to open the Mexican steak-and-seafood restaurant is June 25, pending completion of the paperwork on the business license and the alcoholic beverage permit. Operating hours will be 11 a.m.-10 p.m. Monday-Thursday, 11 a.m.-1 a.m. Friday-Saturday, 11 a.m.-9 p.m. Sunday. There is now a phone number: (501) 476-3336. The website is restaurant-bar-mar-y-tierra-seafood-grill.business.site. And there are signs of life, including a couple of versions of an octopus-based logo, on the Facebook page, facebook.com/MaryTierraLittleRockSeafoodandGrill.

According to an eagle-eyed reader as well as what appears to be its Facebook page (facebook.com/hokaben.us), Hokaben Japanese Kitchen opened Tuesday at 15 Carnahan Drive, Maumelle, previously Captain Express Hawaiian BBQ & Sushi (and before that, a Domino's Pizza outlet). Hours, according to Google, are 11:30 a.m.-8 p.m. Monday-Thursday, 11:30 a.m.–8:30 p.m. Friday-Saturday; however, don't try the phone number Google provides — (501) 851-2292 actually belongs to the Maumelle branch of U.S. Bank.

We reported recently on plans submitted to the Little Rock Board of Adjustment seeking a zoning change toward turning the former McDonald's at Seventh Street and Broadway, Little Rock, vacant since the opening of a new McDonald's a block north and across Broadway, into a mostly drive-thru (with possible patio dining) Chick-fil-A. You will recall that the site plan also requires the destruction of the building facing Seventh between Broadway and Spring Street, which has housed, among other retail outlets, the restaurant Ciao, which closed in January. The Board of Adjustment approved the application at its May 20 meeting, granting several variances.

But is it a done deal? Despite what you may have been reading or seeing via other media outlets, the answer is apparently "no."

Kathy Wells, president of the Coalition of Little Rock Neighborhoods, in an email to officers of the Downtown Neighborhood Association, noted that neither the city of Little Rock nor its agencies have completed action to approve the project, and that "no building permit will be issued until two conditions are met." That includes approval from the city directors for a $75 a year franchise on the alley that separates the former McDonald's site from the building to be razed. And the restaurant builders must yet submit a traffic impact study, which, since Broadway is also U.S. 70, Wells notes, involves state highway officials.

Ol' Bart Southern Eats, an outlet for chef Bart Likes' Greenbrier-based Ol' Bart Mobile Catering, opens Tuesday at 1220 Old Morrilton Hwy. (U.S. 64), Conway. That's "right across the street from Lowe's," according to the Facebook page, facebook.com/olbartlikes, where you can also get a look at Likes' barbecue-centered menu. "We've added a few things to the menu and once we get our feet underneath us you can bet I'll be turning out some specials," Likes posts. The new place only seats 16, but Likes says he was primarily looking for a facility that would give him more prep space for the food trailer, which he will continue to operate — it's a million-dollar business and "we're booked through next year," he says — and found this, formerly a meal prep company called LeanFeast. ("We're going from LeanFeast to Fat Feast," Likes quips.) Hours are 10 a.m.-8 p.m. Tuesday-Sunday; at the moment, the best way to reach Likes by phone is (870) 623-5181.

And speaking of Conway, an eagle-eyed reader reports we're about a month out from the opening of Red Hook Seafood & Bar in the former New China building, 2104 Harkrider St., Conway. There's also an outlet of the Tennessee-based mini-chain in the works for 4510 Central Ave., Hot Springs. Red Hook has eight other locations total, six in Tennessee, four of them in Memphis (the other two are in Jackson and Bartlett), one in San Antonio and one in Southaven, Miss. We still have been unable to reach anybody at chain headquarters. Check out the chain and its menu at redhookseafood.com.

And the Dickey's Barbecue Pit chain is "honoring" Father's Day with a "Best Dad Joke Social Contest" through Monday. Post your "best" corny dad joke on Facebook, Instagram or Twitter using the hashtags #DadJokes and #DickeysBBQ (you must be 18 or older and a U.S. citizen to enter). The randomly selected winner will receive free barbecue for a year in the form of weekly coupons with a $10 spending limit.